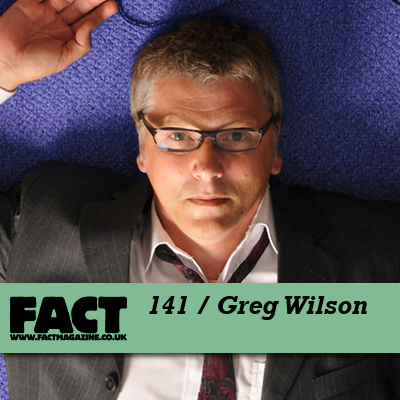 We’ve had some honest-to-god dance music legends helm FACT mixes in the past – Alexander Robotnick, A Guy Called Gerald and Andrew Weatherall among them. Joining them in the cordoned-off VIP area today is Mr Greg Wilson.

Merseyside-born in Wilson is best known for championing early electro with his nights at Wigan Pier then Manchester’s Legend club – people would travel all over from the North and the Midlands to hear Greg spin, and he quickly earned himself prestigious mix slots on Mike Shaft’s popular Piccadilly Radio show – these mixes would prove profoundly influential on a whole generation of budding dance music DJs and producers, and, as Dave Haslam once remarked, “they were some of the most taped programmes in Manchester radio history”. Our man encountered all kinds of hostility from jazz-funk and soul purists for his advocacy of more angular electronic styles,  but he perservered in the face of it, and thank god.

In 1983 Wilson began a residency at The Hacienda, helping establish the night’s reputation as a home for cutting edge club music with killer sets of electro-funk, disco and boogie: these sets not only placed him at the centre of Blighty’s emerging hip-hop culture, they also prepared the ground for the late 80s house and techno sounds that would soon take The Hacienda, and young Britain at large, by storm.  To the surprise of many, Wilson withdrew from DJing in 1983, choosing to focus more on production projects like Ruthless Rap Assassins, and curating compilations including the seminal Street Sounds UK Electro album (1984) and Classic Electro Mastercuts (1994).

The last decade thankfully saw Greg make a welcome return to the DJing fray, but the real renaissance began with Tirk’s brilliant Credit To The Edit 12″s and CD compilations, which celebrated the veteran’s unique and deliciously raw reel-to-reel editing technique. Since then he’s since become a fixture of our nightlife once more, DJing all around the world and showing off his chops as re-editor and remixer across various essential vinyl releases. On April 24 he’s appearing at one of Together‘s whopping parties in London’s Coronet Theatre, alongside DFA duo Holy Ghost!, In Flagranti and more. For more information and tickets on that night – which also stars Cassius and Kavinsky, among others – click here.