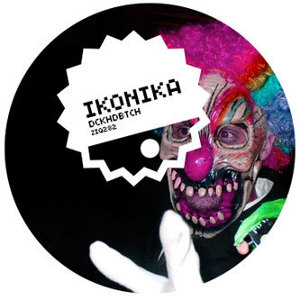 It’s impressive that, despite still being a relative newcomer, Ikonika has managed to develop such an instantly recognisable production style.You could play ‘Dckhdbtch’ out in a club for the first time and, odds are, anyone with even a passing acquaintance with her previous work would quickly identify it as an Ikonika tune.

If you’re a fan of her excellent Hyperdub-released debut, Contact, Love, Want, Have, you’ll find this relatively familiar territory – but not necessarily in a bad way. With its mix of colourful leads, ever-present sub-bass and Ikonika’s trademark chip-tune influence ‘Dckhdbtch’ could be a sister track to any of the standout moments from that LP. That said, this might just be Ikonika’s most melodically interesting outing to date – the hyperactive lead lines jump between techno, house and 8-bit sounds while the bass maintains a constant wobble underneath. Weird and interesting yet always fun and danceable.

Elsewhere ‘Shouldn’t Be Here’, the second of the two B-sides, is Ikonika playing with new ideas. Less up-front and direct than most of her previous work, it sees her toying with fairly ambient vocal samples and melodic, washed out synth chords. It’s really strong and alludes nicely to Ikonika moving in some great new directions.