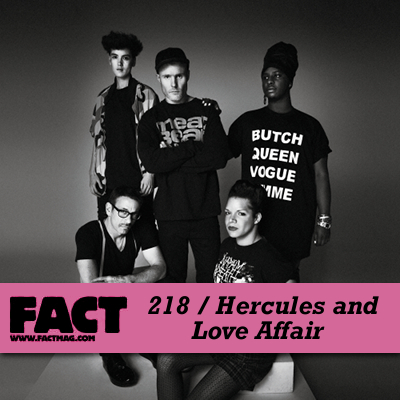 We’ve been nagging Andy Butler  to record a FACT mix ever since the release of his debut single as Hercules & Love Affair, ‘Classique #2’. Four years later, and the boy’s come good.

In fairness, it’s been a busy half-decade for the New York producer and DJ. Hercules & Love Affair’s debut album, released via DFA in 2008, saw he and his band rocketed into cult/pop stardom, and by God did they tour that album hard – in 2008-9 you couldn’t even go down the newsies for a packet of crisps without catching a H&LA live show en route.

Hercules & Love Affair’s new album, Blue Songs, is out this week on Moshi Moshi, and things have changed. Recorded with Patrick Pulsinger in Vienna, and to some extent eschewing the brassy disco tropes that defined the band’s debut, it finds Butler delving deeper than ever into his ’86-’94 house obsession  – lead single ‘My House’ is a loving homage to Chicago and New York’s overlapping 4/4 golden eras, while ‘It’s Alright’ is a beatless cover of the Sterling Void jam – but also developing the range of his songwriting, even singing himself on the agreeably frail title track. This an album that expertly juggles ecstasy and heartbreak, the melancholic and the celebratory. With Nomi Ruiz and Antony Hegarty absent this time around, Butler and his trusty sidekick Kim Ann Foxman have recruited young pup vocalists Aerea Negrot and Shaun Wright, both of whom maintain the tears’n’mascara diva-ishness of their predecessors while bringing a palpable and infectious enthusiasm to proceedings.

So why is Butler so preoccupied with classic house? Even his recently minted record label, MR INTL., is dedicated to new productions hat evoke and allude to that bygone era.

“There was an elegance, subtlety, a sophistication to that music,” he explains over the phone. “It was fine art. The depth and substance is unparalleled. I don’t think anything goes as deep as those early Murk records, for example. Nor do you get the opposite. You don’t get to hear people go off in the way Tyree did, you know, going off but classily.”

FACT mix 218, it’s fair to say, goes off classily. Butler – a killer DJ who knows his shit and then some – builds it around classic cuts from the likes of MK and Praxis, but also includes a couple of recent cuts from Hercules and Kim Ann that show how his crew are trying to take that sound forward today. There’s nothing blue about this selection, we can assure you.

Oh, and Hercules are about to embark on a monster world European tour. Catch ’em on the following dates: