Exploring the divine vapours of Holy Other, on the week he releases his exceptional With U EP for Tri Angle

With the release of With U, his new EP for Tri Angle and a brief tour of Europe this month, Holy Other is set to be receiving a lot of well-deserved attention.

The Stockport-bred artist, who’s also spent time in Berlin and Gothenburg, appeared on our radar last year, with a 7″ of ghostly, warm vapour-pop for Transparent and various Soundcloud edits. In this interview, you won’t find any of the stuff that ultimately shouldn’t even be of interest (such as Holy Other’s real name, and the more trivial aspects of his background), but you will find out more about what does matter: topics like his unique approach to song structure and rhythm, filtration, early experiences with 2-step garage and more.

“I was listening to a lot of shit and decided to try making some things authentically representative of how I feel.”

How’s it going with developing the live show?

“Pretty much fine. I’m trying to shift these tracks out of their comfort zone, away from the software.”

Nice, so you’re switching to hardware for the show?

“Yeah, a sequencer, sampler, FX sort of affair, all hardware.”

That sounds interesting, and possibly more fun to watch.

“Yeah, I think so. I’d probably have some overwhelming urge to check my Gmail while I’m performing if I used a laptop on stage. Fly around on Second Life. Look busy. That sort of shit.”

[Laughs] Has it made you consider new approaches for producing, to be on a new platform?

“Oh it has, yeah. I’m so new to production that I haven’t actually worked out that original comfort zone anyway. I’ve shifted between different software, and played around with different hardware synths and things.”

You only started producing, what, just over a year ago?

What made you jump in?

“Some of my friends had started throwing out music online, and I suddenly became excited about the idea of contributing something to that.”

Which friends were those?

“Some friends out of London, dudes like Universal Swimsuit, Young Athletes League, Felicita, Palmistry. I was living in Berlin at the time they were putting things out. I felt a bit estranged from musical creativity. Like, don’t get me wrong, there’s plenty of creativity there, but I was super excited by ideas coming out of London at that time. I released a 7” through Transparent Records and Robin [Carolan, Tri Angle Records label owner] dropped me a line to talk about more releases.”

Were there any key influences for you as you started?

“I’d say it’s definitely more about filtration than notable key influences. I was listening to a lot of shit and decided to try making some things authentically representative of how I feel. Wait… that is incredibly vague…”

“Oh, definitely emotionally. Like, I’m not really trying to create something original. How should I put this? Well, I’m not noticing a gap in contemporary music and saying “there’s the space I want to occupy”. It’s no hyper-pragmatic approach to creating the sound, and I don’t feel like I’m making some huge artistic contribution. It’s more the challenge of simply trying to create something truly personal.” 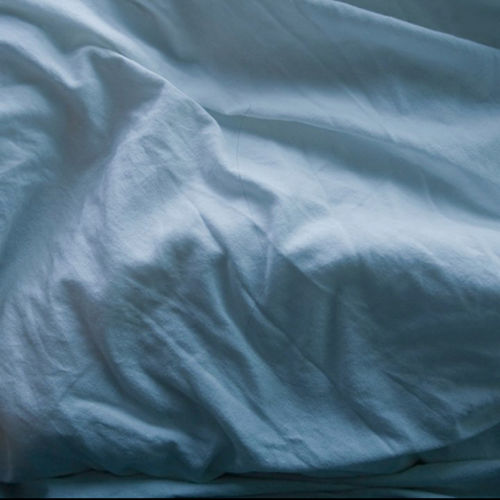 “It’s not intentionally clean music, I’ve just refrained from the static and vinyl hiss that seems to be pretty common right now. I think my music tends to be lo-fi in different regards.”

You seem to have a very successfully intuitive approach to song structures. They flow in ways that are both comfortable yet unpredictable, especially in the rhythmic choices you make. ‘Touch’, for instance, goes through 3 stages of different rhythmic emphases: 3/4, 4/4 in triplets over that, then 4/4 again at the original tempo, all in just over 4 minutes. That’s unusual and refreshing.

“Yeah, I was pleasantly surprised by how well that was received. Personally, I’m not really happy sitting on a house beat, a garage beat or a hip-hop beat. I guess it comes from listening to a wide range of things.”

What draws you to slow tempos?

“I like the room they give you for playing around with the ambience of the track; how you can take any track and turn it to something new with a BPM change and a little bit of reverb.”

Various artists currently working in slower tempos have consciously chosen to downgrade their surface audio and production quality. Before I heard your music I thought it would be grittier because of this, so I was quite surprised at the comparative sheen on it. You’ve actually got quite a clean production style. Do you think Berlin influenced that at all?

“I guess it’s not intentionally clean music, I’ve just refrained from the static and vinyl hiss that seems to be pretty common right now. I think my music tends to be lo-fi in different regards. But I did start listening to very clean, stripped down minimal techno when I moved over there. It seemed to fit the vibes of the city as it stands now. Maybe that’s rubbed off.”

“Yep, I am from Manchester. Uh, well, Stockport, actually. But no one abroad tends to recognise Stockport, so I just say Manchester. Nobody shouts “STOCKPORT COUNTY!” at you when you tell them where you’re from. The only other Stockport dude I can think of right now is Leyland Kirby [The Caretaker, V/VM, etc]. He was out in Berlin at the same time I was, but I didn’t meet him. Not sure where he is right now.”

Do you go out dancing? Manchester’s got a great club scene.

“Definitely, yeah. But it was only something that made sense to me after I moved to Berlin. I was heavily into 2-step while I was in the UK, but not much else. Berlin brought me to house and techno.”


“I guess during those pure garage and dubstep days I didn’t really understand clubs, or dance music either. I felt comfortable sitting in my room listening to shit on tinny speakers.”

How did it become something that made sense, compared to UK garage experiences?

“It might have been the clubs I’d end up at, but I’d always have an aggressive experience. I’ve been to plenty of nights in the UK since and had a great time, mind you. But I guess during those pure garage and dubstep days I didn’t really understand clubs, or dance music either. I felt comfortable sitting in my room listening to shit on tinny speakers.”

It almost feels like a cheap question, but With U is somewhere between a dedicated listening experience and dance music; will your live show be more overtly aimed at dancefloors? Or will it be an extension of this ambiguity? Or perhaps go the other way, and be more immersive?

“It’ll be quite a balanced show between those two elements. As time goes on it’d be great to develop sets more specific to each performance location. Like, it’d be nice to cater to every audience, and I’d want to be able to. But I think it’s good to have that balance, right now.”

Have you been working on new material around the transition to live versions?

“Yeah, I’ve been playing around with some new ideas, but nothing’s fully formed yet. Would love to have some free time to work on it solidly, though.”

“[Laughs] Funny you should say that, I was actually playing around with some jungle tempos this week…”

“[Laughs] Just playing around with a wide spread of BPMs right now. But I’m more than happy with things staying sloooooooooow.”