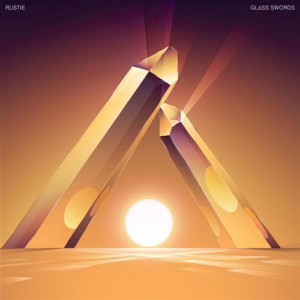 Question: what do Daft Punk, prog rock, happy hardcore and The Legend of Zelda have in common?

Before Glass Swords, probably not much. But on the long-awaited debut album by Rustie, a Glaswegian hip-hop producer who unwittingly, not to mention unwillingly became one of the key poster boys for an entire dance music craze (w*nky, remember?) before signing to Warp and retreating into a refreshingly shameless world of video game soundtracks and ’90s after-party favourites, they’ve found a common ground – and even better, it’s ground shared on the most high-resolution, romantic expression of sheer musical freedom that you’ll hear anywhere this year.

Like his sparring partner Hudson Mohawke, Rustie’s always possessed that ability to imbue his music with larger than life qualities, through the earth-shuddering bassline of breakthrough single ‘Jagz the Smack’, the psychotic squelch of ‘Bad Science’ and his Modeselektor remix, or the endlessly spiraling leadline of ‘Zig Zag’. On Glass Swords, however, his music is bigger than it’s ever felt before – miles bigger. Each track on this album sounds like it takes place on a different planet to the last, and although they’re endlessly detailed (the drum patterns on tracks like ‘Surph’ and ‘Crystal Echo’ might as well be mosaics, and the whole album is full of cinematic layers of shimmer), they’re all driven by some of the most brilliantly natural melodies we’ve heard from Rustie – or, at that, any of his peers – yet.

I call this music shameless, and I mean that as a hugely positive quality. The key influences on Glass Swords are, as far as I can tell (and Rustie’s confirmed some of this in past interviews), video games, prog rock and big room dance music. There’s no underground snobbery to be found on this album; no reserve: the chords on ‘Hover Traps’ are as catchy and dramatic as on any Thomas Bangalter record, and no matter how over the top dubstep producers have got in the last few years, I’ve never heard a dubstep track drop the way that this album’s centre-piece, ‘Ultra Thizz’ does. It’s like angels simultaneously combusting. How many of the artists that emerged from the UK underground at the same time as Rustie can you picture filling their debut album with this much guitar?

Every track on Glass Swords is fantastic, the soundtrack to both the most colourful sci-fi film and the best RPG never made, but this isn’t all that makes this album special. The real kicker is that you get the impression that it’s the point Rustie has been building up to for the last five years; an album made in relative isolation, with zero self-consciousness, shame or thought for trend behind it. Glass Swords is something to be enjoyed, first and foremost, but the thought process behind it, you feel, is something to be cherished.

You can stream Glass Swords in full here.