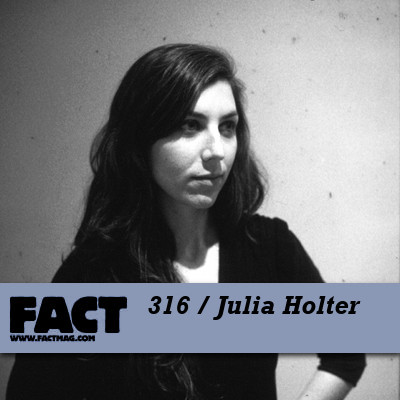 This week’s FACT mix is by Julia Holter, heralding the release of her sophomore album, Ekstasis, due out on March 8 courtesy of RVNG Intl.

Classically-trained Los Angeles native Holter became preoccupied fairy early on in life with the thought and art of the Middle Ages, and a quasi-medievalism permeates her work to this day, from the sleeve imagery to her lyrical inversions and interrogations of courtly love. Her debut album, Tragedy, saw her journey further back into history, with a concept based around Euripides’ 428 BC telling of the myth of Hippolytus, who was dragged to death by his own horses after he spurned the advances of his stepmother, Phaedra (bad luck, that).

Released on the tiny independent Leaving Records, Tragedy became one of 2011’s most notable underground successes, ranking highly in numerous end-of-year charts – not least FACT’s – and immediately establishing Holter as a major talent. Combining an abundant gift for melody and detourned pop hooks with avant-garde structures, unusual instrumentation and all manner of eccentric compositional flourishes, the album earned breathy comparisons with the work of artists as diverse as Kate Bush, Robert Wyatt, Laurie Anderson and Robert Ashley, and deservedly so.

Ekstasis, we’re pleased to report, is every bit as charming, intelligent and moving as its predecessor, and there’s no doubt that it’s more crisply, sumptuously realised. Playing most of the featured instruments herself, and recording once again in her humble bedroom studio, Holter has created an album that’s epic in scope but beautifully controlled, and perhaps an inch or two more accessible than Tragedy with it – a final layer of polish comes from the mixing desk of Cole M. Greif-Neill (husband of Holter’s past collaborator, Nite Jewel), whose past credits include Ariel Pink’s Before Today.

When we invited Julia to contribute to the FACT mix series, we weren’t expecting her to submit anything ordinary. Even so, we were surprised to be sent thirty minutes of mostly field recordings, stitched together under the title of All My Love For You. If we had to hazard a guess as to who the ‘You’ in question is, we’d venture it’s the city of Los Angeles – the sound of its birds, sidewalks, fire hydrants and radio stations form the backbone of the mix. There are contributions too from local experimental composers like Catherine Lamb, Mark So and Laura Steenberge, all of whom appear to be interested, like Holter, in metaphysics as much as music. It all makes for a vivid, engrossing and enjoyable listen – so don’t be frightened, take the plunge.