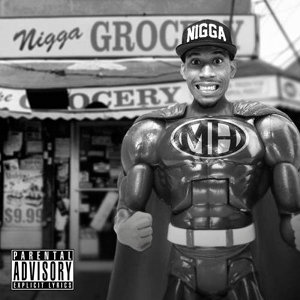 Two types of promotional strategy, courtesy of OFWGKTA. The first, exemplified by ‘Rella’: talk big. Whip up some bluster about your new video, tout it as high art (“This Gets Me Closer To Being Metioned With Spike Jonze One Day”), then turn out a trashy mess and hope that nobody notices. The second, as demonstrated by Hodgy Beats’ free Untitled EP: whisper. Everything about the record – from its faceless title to the casual Twitter post that heralded it – suggested that Hodgy’s latest dispatch would be anything but essential. In reality – and under the cover of being a token giveaway – Hodgy Beats has turned out a characterful, well-produced and surprisingly mature mini-LP. The ‘Rella’ video showed Hodgy strafing teenage girls with a crotch-laser; Untitled suggests that his balls have finally dropped.

Throughout Untitled, Hodgy’s versatility and dexterity are on clear display. His voice is restless and tricksy, going in for an unusual emphasis here, an unexpected intonation there. Take ‘In A Dream’: the off-kilter stresses on the line “Silences ambulances emotional imbalances” turn the phrase into something disjointed and thrilling. He also shows an Echo-like knack for adopting different voices. Over Juicy’s J’s ‘Bullshittin” instrumental, a cobwebbed soul sample bolstered by trap hats and a lumbering bassline, Hodgy’s flow sounds remarkably like Drake in ‘I’m On One’: he ducks and dodges in double-time. The nasal twang he adopts on ‘Cookie Coma’, meanwhile, is as good a Kanye impression as you’ll hear all year. Rather than coming off as derivative, Hodgy’s ventriloquism is charming: it’s the sound of him testing the limits of his own malleable voice.

Hodgy’s underrated flow is also well served by his (surprisingly high-end) choice of producers. The two Flying Lotus cuts, ‘Lately’ and ‘Lamented’, remind you just how vital FlyLo’s languid arrangements sound with a rapper on board. ‘Samurai’, produced by Jonti Danimals, blends degraded pan-pipe recordings with Atari trills and arpeggios: it sounds like someone hammering away at a Capcom game in a woodland clearing. Some of the instrumentals, like The Alchemist’s ‘Cookie Coma’, sound a little vanilla by comparison. And yet Hodgy’s youthful exuberance redeems the fustier musical moments: his youthful burr is way more interesting than, say, John Robinson’s rocking-chair ramblings about the state of hip-hop.

Perhaps the most significant feature of Untitled is its general sense of composure: it’s probably the most mature hip-hop record to gallop out of the OFWGKTA stable. Much of MellowHype’s earlier work (cf the Commodore horrocore of ‘64’) was grisly and shocking; like Tyler’s oeuvre, it was stuffed with gags designed to make you gag. On Untitled, however, the corpsing is practically non-existent. When the frat-boy nastiness emerges – “Papa was a pastor, grandma the pastor’s wife / Slit your wrists and swallow knives bitch”- it’s actually fairly incidental, unshowy. On ‘Samurai’, Hodgy intones “Consider me indivisible, and also one mentally fucked individual”, but his genial tone sounds anything but conflicted.

Moreover, when there is menace, it’s genuinely chilling. The chorus of ‘Lamented’ – “I just want to drink out of your cup” – is ostensibly pretty generous, but the monosyllabic, pounding delivery is about as aggressively phallo-centric as it gets. On the last two tracks in particular, Hodgy sounds much older than his years. ‘If Heaven Is A Ghetto’, whose opening cadenza sounds like it could have been lifted from What’s Going On, sees a straight-faced Hodgy chastising the bad father with a “child in the truck / When he shows up”, and pondering his funeral arrangements. ‘Higashi Loves You’ asks that he “be a legend like Tupac and Biggie”, and concludes with the line “Put my shades on, let’s bounce”. The tone is more old guard than new school. Yes, there are juvenile moments (and, horror of horrors, a D12 shoutout). But the swivel-eyes and goon-faces of OFWGKTA seem like something he’s outgrown.

As an Odd Future member, Hodgy’s day job has particular requirements: scatological stunts for the upcoming Loiter Squad show; stage-dives and off-stage scuffs; gross-out promos that feel like sell-outs. The Untitled EP, however, shows that, whatever his gang does next, Hodgy has the instincts and ears of a professional. He’s smuggled out a great solo record, and done his best to hide it.