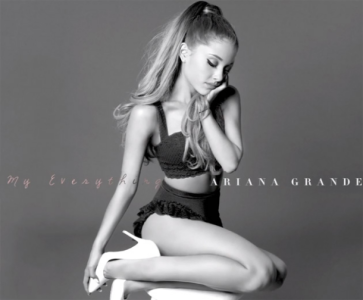 On the face of it all, Ariana Grande has managed that transition from children’s TV actor to VMAs-performing popstar with fewer hitches than most. Her current Twitter profile picture is of her kissing Mickey Mouse on the nose, yet she’s simultaneously riding the charts in a Jessie J song where she croons “anybody could be good to you / you need a bad girl to blow your mind.”

It’s no insignificant achievement to be spinning those plates side by side. Since the vanilla doo-wop of her debut album Yours Truly, Ariana’s been maturing her image without ever actually being edgy; even when shooting missiles from her boobs in the hilariously kitsch ‘Break Free’ video, she managed to riff on the weaponised sexuality of Nicki Minaj and Katy Perry while still distancing herself from ever being totally explicit, filtering everything through a veneer of cartoonish silliness.

While this is impressive, that level of carefulness comes at a cost, and it’s a lack of risktaking that holds back Ariana’s second studio album My Everything. Like most major pop albums there’s a crowd of writers and collaborators at the helm, but although Zedd’s EDM fireworks and Cashmere Cat’s bouncing ‘Be My Baby’ are both likeable in their own right, they don’t make sense on the same tracklist without a strong character or narrative to hold them together. Instead, Ariana belts lines that make little sense: she’s admitted that she didn’t even want to sing the grammatically incorrect “I really are” line in ‘Break Free’, but lost that argument with songwriter Max Martin. She fundamentally misunderstands the concept of trust on ‘Be My Baby’ and on the Ryan Tedder-penned ‘Why Try’ she tries to fit a tale of doomed romance into a tired angels/devils dynamic.

Still, although her songwriting hasn’t improved since Yours Truly, this album is still a hell of a lot more fun. Ariana wraps her competition-slaying voice around phrases every which way you can imagine, and despite the fact that most of the lines themselves are nonsense, you can at least understand what she’s singing these days. Some of the guests feel extraneous – the record would have one less problem without Iggy Azalea’s verse, and Big Sean’s interlude on the beautiful ‘Best Mistake’ is a flat moment in an otherwise stand-out ballad – but others create the perfect counterpoint to Ariana’s breathy melisma. In particular, album highlight ‘Love Me Harder’ is actually improved by The Weeknd’s presence, a feat he hasn’t even achieved on his own music since 2011. He plays the shady love interest with skeletons in his closet, but his sleaze is turned down several notches as his clean-cut falsetto battles Ariana’s octave-juggling over an irresistible thump. A$AP Ferg too is elastic and brilliantly weird on the record’s sexiest moment, ‘Hands On Me’.

While she’s guarded in her lyricism and never totally innovative in her sonic choices, these conscious moments of oddness mean that Grande is still one of the most intriguing popstars around. She samples ‘I’m Coming Out’ in the defiant ‘Break Your Heart Right Back’ – a track she’s said is about an ex who she believes cheated on her with a man – and while she never makes the innuendo of ‘Love Me Harder’ explicit in its lyrics, human double entendre The Weeknd’s appearance makes it clear that she’s not oblivious. Right now, she’s coy enough for teenagers can blast her tunes around their parents, but still tantalises with what’s unspoken. Ariana is funny, smart and has a voice you could listen to for days, so there’s plenty of hope that she might yet break free from her childhood role and figure out what she actually wants to say. In the mean time, My Everything isn’t quite everything, but it’s enough.