Features I By Brid Arnstein and Amar EdiriwiraI 20.02.15

The five most compelling record collectors in film

Unlike most places, Hollywood never really lost its love for vinyl. It’s no coincidence that most of the film characters that follow belong to worlds set in the ’90s and ’00s, a time when the average joe was swapping records for CDs and iTunes. And today, contemporary cinema, TV and even advertising is filled with references to records and turntables.

Like collectors, filmmakers have always been lured in by vinyl’s warmth, tactility, and physicality. If you’re trying to portray passion for music, clicking an mp3 or slipping on a CD doesn’t quite cut it compared to the act of playing vinyl on a turntable. Records, from their hypnotic spinning grooves to the jolty needles that explore them to the curious rooms and shops that house them, are a cinematographer’s favourite musical friend.

Beyond its visual draw, the key reason for dominance of vinyl in cinema is wrapped up in the human part of vinyl, the collecting bit. One tradition is to use collecting to reveal illness: obsessive compulsives who use their object as a central organising focus in their lives, thrilled by lists and completism, divorced from society. The High Fidelity fans out there, buzzing off news of a soundtrack reissue, will know this all too well. But record collecting doesn’t have to be about compulsion, it can represent anything from nostalgia to cultural capital, from authenticity to personality, as the fictional characters below reveal. 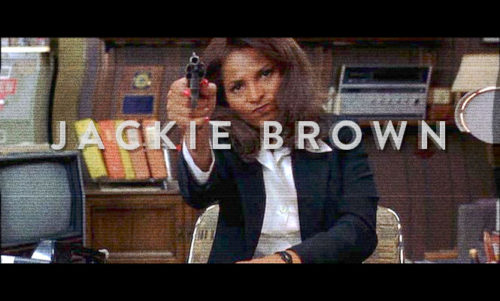 Quentin Tarantino wanted us to “hang out” with the characters of his 1997 film but Jackie Brown is a hard nut to crack. A key, intimate scene with Max Cherry lets music do the talking and tells us what our sassy heroine would never dare to admit herself:

Jackie invites Max inside, telling him to make himself feel at home whilst she fixes him some coffee. She wears one of those fluffy towelling dressing gowns and it’s the first time we’ve seen her out of her uniform, the first time we’ve seen her resemble anything remotely fluffy. Except that she’s not – she’s just got a gun and the milk’s off because she’s been in jail. As she rifles through her collection, Max asks her if she “ever got into the whole CD revolution?” Jackie tells him that she’s invested too much time and money in her albums, and she’s not interested in the new stuff. He watches in awe as Jackie lights a cigarette and positions the needle on the track – The Delfonics’ ‘Didn’t I (Blow Your Mind This Time)’.

It’s a change in tempo from her natural soundtrack – Roy Ayers’ ‘Brawling Broads’ – which plays at four different times in the film and is a nod to Jack Hill’s 1973 Blaxploitation film Coffy (in which Pam Grier also starred.) It certainly has an effect on Cherry, who goes out to the store and buys it on cassette. 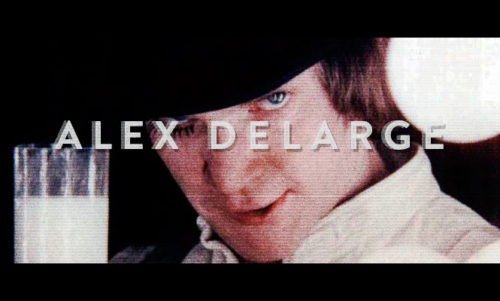 Film: A Clockwork Orange (1971)
Directed by: Stanley Kubrick
Character: Alex DeLarge
Played by: Malcolm McDowell
What would you find him listening to? Beethoven’s Symphony No. 9
Collecting style? It’s him versus the status quo

You won’t catch Alex singing along to Goggly Gogol, Johnny Zhivago or The Heaven Seventeen (all fictitious). This droog favours the titillations of trumpets, trombones, and Beethoven’s “glorious” Ninth Symphony:

Then the disc on the stereo twanged off and out, and in the short silence before the next one came on, she suddenly came with a burst of singing, and it was like for a moment, O my brothers, some great bird had flown into the milkbar and I felt all the malenky little hairs on my plot standing endwise, and the shivers crawling up like slow malenky lizards and then down again. Because I knew what she sang. It was a bit from the glorious 9th, by Ludwig van.

One scene sees Alex nonchalantly saunter through a record store, barely engaging with the bestseller lists that flash in multi-colour as he makes his way to the counter to ask for his record that he ordered two weeks ago. Kubrick plays a visual game with us here, putting himself into his own reflection on popular culture; just visible in the front display is the distinctive outline of his 2001: A Space Odyssey soundtrack. At the counter Alex meets micro-boppers Marty and Sonietta, who suck lollipops to match the bestseller lists.

These girls will consume whatever culture dictates; despite the multitude of choice that the cavernous store seems to present, its customers’ decisions are bound. Alex asks the girls: “What you got back home sister to play your fuzzy warbles on? I bet you got little save pitiful portable picnic players. Come with Uncle and hear all proper. Hear angel trumpets and devil trombones.” Sure, it’s a chat up line that ultimately leads to a threesome, but Alex has a refined taste and his collecting habits are a sound indicator of his determination to maintain his free will, whatever the consequences. 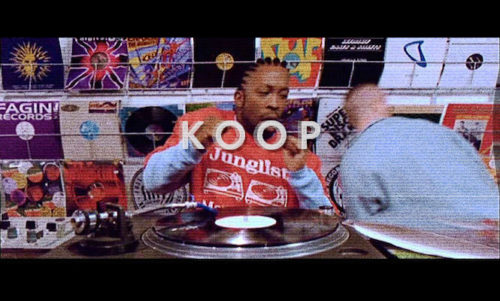 Whilst High Fidelity’s Rob, Dick and Barry are self-confessed vinyl snobs, Human Traffic’s Koop is a bonafide pusher, selling wax like it’s the ecstasy his mates will be ingesting that night at the club. This is ’90s British rave culture, where disposable fun reigns in the place of nostalgic preservation. In the daytime, he’ll be found in his store spinning yarns for a quick sell, where the more ignorant the customer the better:

But in the privacy of his bedroom, Koop pretends to scratch to Mad Doctor X’s ‘Puffin da Herb’ and tells himself he’ll only make the grade when he can scratch like X.

Whilst life on the party circuit appears to be fun and games, etch away at the surface and Koop represents a lost generation. A brief yet intimate scene showing Koop’s father living in a fantasy world under psychiatric care goes some way to suggest that Koop’s perpetual living for the weekend gives him a new kind of order amidst uncertainty. Viewed in this light, Koop’s vinyl habits, as with his drug habit, seem less like harmless pastime than an indication of a life leading nowhere. 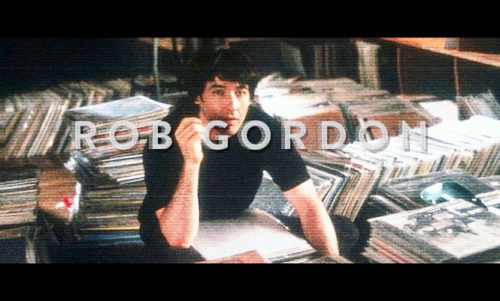 Film: High Fidelity (2000)
Directed by: Stephen Frears
Based on: Nick Hornby’s novel of the same name
Character: Rob Gordon (formerly Rob Fleming in Hornby’s book)
Played by: John Cusack
Collecting type: Obsessive compulsive
Where would you find him? At his record store, Championship Records in Chicago
What do they sell there? Barry will tell you: “A little of anything that matters. Rock, soul, R&B, punk rock, hip-hop, ska, new wave…”
What should you say? “Have you tackled the Great Reorganization yet?”
What shouldn’t you say? “They’re only records, and if one is better than the other, well, who cares”

While vinyl often features in film to contextualize the world of the characters, as with Tarantino’s Jackie Brown, for High Fidelity’s Rob Gordon, it is his raison d’etre. Rob is the everyman of vinyl collectors, cataloguing his past relationships into top five lists while failing to realize that his romantic shortcomings are a direct consequence of his collecting habits. He spends his days at his store Championship Vinyl with “musical moron twins” Dick and Barry squabbling over track names and chasing out customers with poor taste.

Rob’s vinyl collection acts as an archive for all past experience: “What I really like about my new system is that it makes me more complicated than I am. To find anything you have to be me, or at the very least a doctor in Rob-ology.”

As is evident, the relationship between Rob and his collection is not a healthy one, keeping him in a kind of stasis somewhere between nostalgia and aspiration. It is only when he realizes that the fantasies music has allowed him to create aren’t real that he can start to live his life in the present. 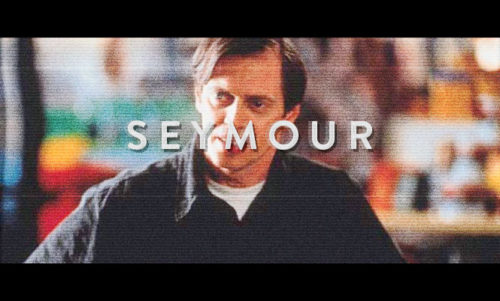 Film: Ghost World (2001)
Directed by: Terry Zwigoff. The film is a collaboration between Zwigoff and cartoonist Daniel Clowes, who created the comic strip of the same name
Character: Seymour
Age: Somewhere in the middle
Played by: Steve Buscemi
What does he collect? Traditional Jazz, blues, ragtime

If Rob Gordon thought he’d had rough luck with the ladies, then who knows what he’d have made of Ghost World’s Seymour. Seymour is the movie archetype of record collector-slash-loner, at odds with an increasingly commercial world that doesn’t seem to accommodate him or his collection. But this is a reductive view, one initially shared by the film’s sardonic teen protagonist Enid and her best pal Rebecca. It isn’t until Seymour lends Enid his copy of Skip James’ ‘Devil Got My Woman’ that she realizes he’s exactly the opposite of the corporate sell-out that she loathes. Beyond the beige clothing and void sense of humour is a like-mind.

Perhaps it is through Enid’s eyes that we can best understand Seymour. To her, his collection is the accumulation of experience from a world beyond the town in which she lives. He keeps his records like inpatients in a sanatorium, holding a dedication to his 78s that borders on obsessive-compulsive. But whilst this is no strange behaviour for any vinyl enthusiast, Seymour’s main problem isn’t himself but the society he’s wound up in.

In a 2001 interview, Zwigoff said: “For me, art, music and design all came together in the late ‘20s [….] In 1929 you could go see the latest Picasso exhibition and then go see Jelly Roll Morton play at a nightclub. In 2001, you can go see either ‘N Sync or the Backstreet Boys. There’s no comparison.” Whilst Zwigoff is being a little dramatic here, it’s with good reason. Every modern culture is afflicted with the same predicament – the presence of the ghosts left over from a seemingly more authentic past.