Fact’s Fall/Winter ’22 issue explores how artificial intelligence is being used by artists in unconventional, exciting ways.

Rabit, VTSS, Richard Mosse and Universal Everything feature on the covers of the fourth print edition of Fact, an ever-evolving platform for artists working at the intersection of the physical and virtual, pushing creativity in new, often unexpected, directions.

The issue explores the artists behind our two new exhibitions at 180 Studios: Richard Mosse, whose mesmerising new A/V work Broken Spectre places the viewer directly in the climate emergency red zone of the Amazon; and digital art collective Universal Everything, whose show Lifeforms is an amalgam of unpredictable, generative pieces and installations that mirror and shift with time and the public’s interactions.

Artificial intelligence is also a key tool being used in unconventional, exciting ways by other artists featured in this issue. LA-based studio Actual Objects “process everything with AI” to merge together nature and technology in order to “suspend reality” in their collaboration with electronic musician VTSS.

Elsewhere, artists Hito Steyerl and Lawrence Lek discuss the implications of Deep Learning AI for the practising visual artist; technology disrupters Holly Herndon and Mat Dryhurst unveil the ways in which AI will radically transform the creative landscape, and Rashaad Newsome contributes an original artistic intervention inspired by a non-binary AI called Being.

Fact 04 also features original contributions by Rabit and Collin Fletcher, Blackhaine in collaboration with Hannah Rose Stewart, and Block9. Fact’s Fall/Winter ’22 issue is available now and will be distributed internationally by WhiteCirc. It can be bought direct from The Vinyl Factory’s online shop, from Boutique Mags, the exhibitions at 180 Studios or from the stockists listed below.

Buy tickets for Universal Everything: Lifeforms and Richard Mosse: Broken Spectre. Both exhibitions run at London’s 180 Studios until 4 December, 2022.

Read next: Universal Everything explore digital life in motion with Lifeforms, a major new solo show at 180 Studios 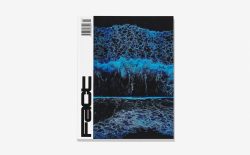