Ricardo Villalobos makes his first appearance on DFA Records this month with an epic remix of Ndf.

‘Since We Last Met’ is the first fruit of Pronsato and Giorgini’s collaboration. Due to be released as a 12″ and digital single by DFA on August 30, it’s a hazy-vocalled (think Toro Y Moi, Caribou), rhythmically inventive and decidedly beach-friendly slice of techno-pop that recalls Luciano’s fine mid-noughties productions.

Villalobos’ version of ‘Since We Last Met’ is almost three times the original’s length, building hypnotically to a subtle but devastating climax, making full use of Sergio’s vocal throughout. It’s not a quantum leap forward for the producer artistically, but it is a timely reminder of how well-honed and effective his signature sound is.

It’s been a while since we heard any original material from the Chilean producer (nothing since 2009’s Pilgrim 12″?). We can only hope that he’s hard at work finishing the ECM catalogue remix project that was hinted at last year. A new album on Perlon is reportedly also coming soon. 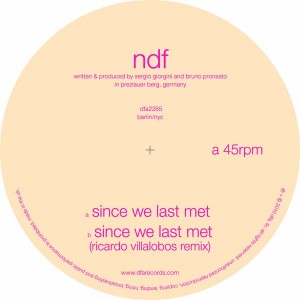