The Streets: Computers and Blues 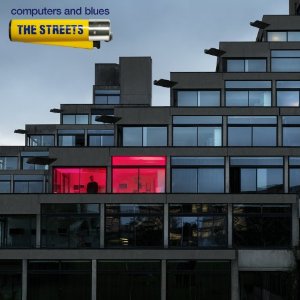 At one point or another, everyone who’s listened to The Streets will have considered both extremes of the experience. Is this music good? Is it bad? Is it new? Every possible answer to all of these questions will have been considered, and fully believed and accepted, in the listener’s mind before eventually settling on his or her final view, after an exhausting battle with the inner self.

Cos The Streets are weird, people. A true anomaly. Since The Streets’ heyday, we’ve had Jamie T, and the lad chanting his chat over beats he made in his nan’s house or whatever is made much less alien. But The Streets remain a hard band to place in even the most well-ordered of minds. Still to this day, whenever I listen to The Streets I have to withdraw behind a veil of ignorance and try to work out what I would think of each individual track as completely removed from all other music I’ve ever heard. And this is the end! Computers and Blues is to be the last Streets album. Best make my final mind up, smartish.

‘Going through Hell’, the first remarkable track from the record, is Skinner’s attempt at the Black Album-era Jay-Z style of invulnerable invincible Rubin-rock rap. And at first, the album does seem to be a bit of an extended brag. ‘Without a Blink’ is this brilliant combination of beautifully light trance and hard-arse macho bragging. But then things get serious and shaky.

‘Blip on a Screen’ is like an episode of Casualty; all overwrought emotion and comforting dismal monotony. It’s about going to see a scan of his unborn child but the first couple of times I listened without close attention I thought it was about a hospital bedside vigil, ’cause it’s delivered in such a downcast way, and the standout lyrics are of overwhelming sadness: “the world is uncertain and I’m certain by the curtains tonight”, “for the first time in my life, the worst that could happen is utterly unthinkable”. Closer inspection (which, don’t worry, I do engage in eventually) reveals the lyrics about the kid to be exceptional, too: “You’re growing thumbs, I’m growing numb”, “It is all as simple as you think when you were little”, “Growing to an adult is just learning the language of explaining with words what you were as a baby”.

Skinner’s become a sweet boy over time, sweeter than that Jamie T ever was. It was always clear Mike Skinner viewed himself as a poet, and ‘Trying to Kill M.E’ features a lot of lyrics about his pen and the creative process, a sure sign of a poet announcing themselves to the world. The pseudo-profound lyrics, “The oldest cell in my body’s only ten years old… I am just a child who got a few years older”,  are a bit overambitious but since when was a Streets record about taking himself seriously?

He’s still funny, too. Just when you think ‘Soldiers’ is getting way too humourless, Judi Dench gets a mention. ‘OMG’ is a love song based on Facebook relationship statuses. I’m an automatic fan of any song that is about texting, and probably would extend this unconditional love to songs about Facebook, if there were enough of them for me to have considered it. Still, good for Skinner to have broken that ground. ‘Trust Me’, features the lyric “Alice in Wonderland, Malice in Sunderland” which would seem to require some letters to be written to Bryan Talbot’s lawyers.

Of course, it’s not all great – but it was never going to be. ‘We Can Never Be Friends’ is the album’s worst song, the most sixth form poetry-like of the lot, and closer ‘Lock the Locks’ brings the Streets story to an end in a loose and lackadaisical manner. Look not for profundity or closure here, it’s a standard love song with no big send-off. But in a way, it kinda works. More than anything else, the theme of Computers and Blues is growing up, which gives the impression that Skinner is a bit tired of the whole Streets endeavour, and is perhaps just happy to leave it.