Le Guess Who? proves that experimental music doesn’t have to be lofty and joyless

Is there any punctuation more powerful than the question mark?

From clickbait headlines to social media polls to memes of Nick Young, it’s clear how effective the question mark is at provoking engagement and interaction, as well as providing a suitable reaction to pretty much anything in these times of universal uncertainty. It’s this dash of mild, humourous perplexity in the name of Utrecht festival Le Guess Who? that’s so striking. When an event with a pre-announced line-up has a name like that, it leads to inevitable questions.

Like video game consumables, these question marks were scattered across the city, floating above stands outside festival venues or beckoning through shop windows. Utrecht is the Netherlands’ fourth largest city, where bicycles run the roads and traffic lights impatiently click their tongues at pedestrians crossing them. Vast and intimate at the same time, medieval architecture and great churches surround the Oudegracht canal before meeting the huge Centraal station/shopping mall complex. The mixture is fascinating, and these paths eventually lead to TivoliVredenburg, a colossal monolith home to several music venues and much of the festival itself.

The festival began a few minutes’ walk from there, beneath the roof of Janskerk, a church dating back to 1040. Hildur Guðnadóttir’s opening set provided shelter from bad weather and a warm hand to hold, but not without its own tension. Her cello and voice engulfed and sometimes overwhelmed an audience silent but for coat rustles, penny drops and exhausted babies’ sighs. She was followed by Julia Holter, one of several artists who expressed condolences and dedications during the first day to those affected by the terror attacks on Paris in November. Suggesting her own lyrics weren’t appropriate to express her sentiments, she opened with a recital of Karen Dalton’s ‘My Love, My Love’ before moving on to her own, newer songs. ‘Feel You’ became more self-assured in performance, encircled by dancing, dazzling viola, and ‘Vasquez’ was daringly embellished into a saga of murmurs, rumbles and shouts. Telling anecdotes between songs, Holter’s voice seemed to race ahead of her, although she’d elocute with a deliberate, striking clarity when singing.

I’d heard talk from a few people across the festival about how their relatives or even they themselves had reservations about attending music concerts in the wake of the attacks. When artists touring from overseas mentioned Paris, I’d first assumed their perspective was of a homogenised Europe. Really, as artists and attendees forge unspoken contracts and compromises, music events can be extremely vulnerable places physically and emotionally for all involved. It’s natural that a threat would ripple through such a connected community. I’m often wary of political violence being placated and reduced to tragedies under the shroud of mourning. As a brown person in Europe, I’m all too aware of racism lurking behind patriotism, which always bubbles up to the surface in the wake of events like these. So the showcase of folk music from Middle Eastern countries on the Sunday felt of special importance, because festivals should enable connections to cultures, and these times call for inclusivity with solidarity, rather than reactionary xenophobic rhetoric. Buzuq player Elie Maalouf was the clear standout, performing folk songs and improvisational pieces that stemmed from the Kurds and nomadics of Lebanon and Syria. Tribute or interpretation, there was a story behind each one, and he played with mesmerising technicality and engrossing fluidity. What may have begun as a post-night out healing session soon became a masterclass, greeted with a standing ovation despite being the very first act of the day.

Of the headliners I saw, Kamasi Washington was perhaps the grandest. The saxophonist and his band drew a crowd that seemed to fill Grote Zaal, the lavish, octagonal concert hall that sits at the base of TivoliVredenburg. Wandering in mid-set, I saw two drummers with full kits each launch into an explosive rendition of ‘The Magnificent 7’, a piece that played out like sparring solos. Tony Austin joined Ronald Bruner Jr., brother of Thundercat and Jameel Bruner from The Internet, who directed 10 minutes of build-ups and breakdowns, climaxes and mutating rhythms. An ensemble performance of ‘The Rhythm Changes’ also shone, but it was the collective sense of witnessing something special during the percussion spotlight that lingered most vividly.

“Keiji Haino’s sounds had body because he gave them his own, leaping and prancing in whimsical and obsessive ways to direct reverberations.

The most refreshing thing about Le Guess Who? is how it gives a platform to more experimental strains of music without any of the associated loftiness. Faust were first to marry a challenging approach with humour. Sure, their sound was a heavy, delirious mix of magnificent acoustics punctured by industrial crashes, gas canisters and hurdy-gurdies, but Jean-Hervé Peron was yelling, “Pinochet! Stalin! Kartoffelsalat!” and three women were seated front-and-centre stage, nonchalantly knitting for the entire set. Keiji Haino’s demonstration of sound affected beyond the moment of its inception involved mesmerising, visceral percussion. His sounds had body because he gave them his own, leaping and prancing in whimsical and obsessive ways to direct reverberations. There was also Sunn O))), whose formidable reputation for loud, low frequencies is only surpassed by the actual physicality of their own sound. And yes, whilst I could feel the bass forcibly reshaping my oesophagus, what was most evident was the fun the band were having. Joined by Hildur Guðnadóttir with Stebmo on trombone, Stephen O’Malley and Greg Anderson shrouded themselves in hooded robes, shared red wine and threw up devil horns as they steamrolled Tivoli’s big gig room Ronda with their colossal sound. Endurance tests are rarely this intense, though their audience stood ground and raised clawed hands in solidarity.

Sunn O))) curated a large part of the festival bill, and one of their picks also began their ritual with a drink. Attendees curiously filtered into Tivoli’s almond-shaped, multi-tiered concert hall, Hertz, where a slowly building drone ushered them to their seats. Eventually rising from behind his plush toy-covered and clothing-adorned chair, table and grand piano, Charlemagne Palestine ambled around the stage as if he was conducting his own soundcheck. Abruptly killing the noise with a stab of the space bar, he left more questions than answers with his introduction: “Once, I was a fugitive here,” he said of Utrecht. He wandered for several minutes, toasting himself with a clink of two glasses throughout. His eccentricity was received warmly, and when he finally sat down at the piano, amusement and bemusement turned to awe. Notes refracted and reflected like rays through optical fibre in constant motion. Resonance swallowed us whole and spat us back out. Palestine finished with the sound of a Jenga tower gradually crumbling over a bed of droning sustains. And then came the smirking, clinking glasses once more. The artists at the festival proved that following them down the rabbit hole did not have to be a joyless, frowning affair after all – quite the opposite, in fact.

From the world of dance music, Le Guess Who? was, unsurprisingly, more inclined towards club outliers. Demdike Stare’s set at a smoke-filled De Helling was a frustrating workout that met an abrupt end as I’d barely started to break a sweat. Club Ekko seemed to keep the volume down for DJ Paypal’s set, though it was the first time Le Guess Who? really showed a desire to animate the dancefloor and was incredible fun. Paypal’s latest record – a happy, heady footwork blend of everything from jazz to Reichian minimalism – was gleefully mixed with edits of basically anything: ‘Pulse X’ and ‘7/11’ to ‘All The Things She Said’ and ‘Battle For Middle You’. It was hilarious and fantastic. Lotic moved from N.A.A.F.I.-like beats towards his own productions from Agitations at Tivoli’s Cloud Nine, a venue that felt more like a VIP bar with a stage for private bookings, the type you might see in Empire. It was a jarring experience for me, as his mixtape was created in reaction to performing for white, male Europe, so to have that crowd drunkenly, obnoxiously barging and fist-pumping distracted from my immersion.

There were moments when the festival delivered on unexpected fronts too. The stand of movable seating at Theater Kikker filled out quickly for improvisational minimalist jazz trio the Necks, who didn’t exchange glances once during their disciplined, entrancing performance on double bass, piano and percussion. Annette Peacock sang to an inquisitive crowd back at Grote Zaal, her voice taking unexpected twists and turns as she struck keys and cued beats. Without missing a beat (or breath) between her peculiar lyricism, she commanded: “No pictures, no photos.” Later, she firmly asked the lighting engineer to revert to a previous configuration, her assertions beginning to feel arbitrary. As she sang the last song, she purposefully left the stage – the music and her voice carrying on to a pleasantly perplexed concert hall. Her set was an exercise in the dynamics of control. Had she really been playing us all along?

With so many other acts at different venues on offer, films and talks to attend, an integration into the city complete with partner cafes and shops, a mini festival, Centraal museum entry plus a staggeringly massive record fair, a single visit to Le Guess Who? might barely scratch its surface. But there are also some questions surrounding the festival (aside from its logo), as it moves towards its tenth year. Its growing pains stem from an unwillingness to commit to a beaten path. It keeps one foot in and one foot out, focusing on the indie-psych-(post)-punk-prog spheres whilst bringing folk and experimental into the fold. It hosts club outliers without cultivating the core of the culture. Its venues are near yet far as the festival spreads itself citywide whilst concentrating on TivoliVredenburg – an 18-month-old utopian hub of venues that Utrecht’s creative environment is still adapting to. But it’s this eclecticism that helps the festival thrive, too. If your tastes are open and wide-reaching, if you want to see things you’ve never considered before along with those that you love, and if you’re the type to try to have your cake and eat it, there’s no question about it – you should pay Le Guess Who? a visit. 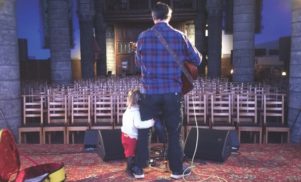