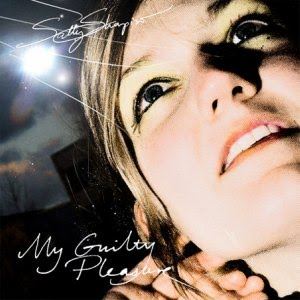 First impressions of this, Sally Shapiro’s second album, are that not much has changed since 2007’s debut Disco Romance.

Rather than strike out in a new direction, producer Johan Agebjörn and the eponymous (yet anonymous – her real name is a secret) Ms. Shapiro mine the Space/Italo/Euro-disco seam ever deeper. From the aquatic ambience that introduces the opening ‘Swimming through the Blue Lagoon’ to the synthetic strings that close out ‘Miracle’, breathy vocals, bittersweet romance and bouncy basslines are again the order of the day.

Yet if ideas are rehashed (the French spoken intro to ‘Miracle’ echoes those of ‘Time to let go’ and ‘Sleep in my arms’ from the first album) they are sometimes better for the repetition. This second LP is titled My Guilty Pleasure in reference to the perceived unfashionableness of its sugary sounds. Yet by revelling in the pleasures and limitations of early ’80s dance pop – even down to the sleeve art, with its Evelyn ‘Champagne’ King typeface and Valerie Dore-style photo – Agebjörn and Shapiro have crafted something that over repeated plays seems more fully realised (and therefore more enjoyable) than Disco Romance and its occasional nods to twee indie (‘Anorak Christmas’).

Consequently, while the singles ‘Love in July’ and ‘Miracle’ are happily present and correct, they are by no means floor-fillers surrounded by a sea of filler. Whether it’s the synth line shadowing the vocal melody on ‘Let it show’, the bass and drum machine breakdown at the start of ‘Moonlight dance’, or the piano arpeggios at the end of ‘My fantasy’, the thought and loving detail that Agebjörn has put into his arrangements consistently repays close attention.

Combine that with some pop tunes the proverbial milkman could whistle (stand up ‘Save your love’) and a cover of Nicolas Makelberge’s thought-provoking ballad ‘Dying in Africa’ and you have a pleasure well worth the guilt.