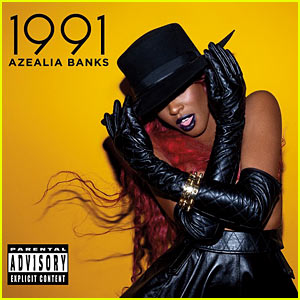 Since last year’s breakthrough hit ‘212’, Azealia Banks’ endless beefs have been variously bolshy (Richard Russell), bratty (T.I.) and boring (Lil’ Kim). Her online tantrums have been plentiful and laughable: the latest involved a hissy fit in which the rapper declared herself “no longer…a rapper; I never was…no more Twitter for me”; then, as is the entirely predictable way of these things, three days later she resurfaced on Twitter premiering a new track, on which she rapped. There’s been somewhat less music, though: a few inessential, somewhat slapdash songs that were more notable – inevitably – for controversial production parentage than quality. Even this four-track EP, the official follow-up to ‘212’, failed to emerge when Banks originally claimed it would.

Not that this is necessarily a bad thing: it’s refreshing to see a rapper (yes, rapper) who isn’t intent on over-saturating the internet with 20-track mixtapes every few months, an approach that for some ends up diluting the impact of their music more than anything else. It makes sense that Banks would hold her best material back for her debut album proper. But does the 1991 EP do anything to dispel the lurking suspicion that Banks might be a one-song wonder who has benefited from canny indie-friendly positioning to gain a good deal more hype than fellow emergent young female rappers such as Brianna Perry, Reema Major and Angel Haze?

Yes and no. Nothing on the EP matches ‘212’, included again in any case (though the needless extra echoing on the production does it few favours). Even allowing for that impossible standard, on first listen there’s not much that inspires either. On ‘Liquorice’, Banks takes on Lone’s ‘Pineapple Crush’ and feels slightly overwhelmed by its broad synth brushstrokes. ‘Van Vogue’ ends with a tedious extended skit that kills the EP’s momentum stone dead. And on ‘1991’, Banks sounds less like the future of rap and more like Missy Elliott – specifically, the Missy Elliott of ‘4 My People’ and ‘Work It’, right down to her identical vowel pronunciation, nonsense onomatopoeia and fondness for le français.

But then, Elliott – who rapped over 4×4 house beats and made explicitly sexual music without objectifying her own body over a decade ago – was always a more apt comparison than Lil’ Kim or Nicki Minaj. Like her, Banks switches from rapping to singing less for hooks to sugar the hardness of her rapping, and more as a decorative tactic to move the track unexpectedly into new territory. And the sheer uncompromising denseness of Banks’ flow – words tightly packed against each other, rhymes stacked on top of each other, Banks losing herself in the sheer joy of pleasurable phonetics – is also reminiscent of Elliott in the way it forces the listener to work. ‘1991’ and ‘Van Vogue’ take their time to settle, but once Banks’ clever double-backing references (one verse starts with Louvre and ends up at Lou(is) to the V(uitton)) and pursed-lips put-downs emerge from the backing, her tracks wind up a lot more rewarding than they initially seem. For now, Banks continues to get away with her obnoxiousness – and while the quality of the music remains disproportionate to the hype, it does make her bratty rejection of the rap establishment feel that much more thrilling.