Set two decades after the original Trainspotting, T2 shows that some things never change. April Clare Welsh takes a closer look at the sequel to a film that marked a generation.

“Choose watching history repeat itself,” Renton says halfway into Danny Boyle’s new Trainspotting sequel, T2. Renton’s ‘Choose Life’ monologue, one of the original movie’s defining scenes, is given a 21st century update that swaps CD players and big televisions for Twitter and Instagram, and his words resonate throughout the film as we watch familiar cycles of opportunity, betrayal and resolution unfold.

Reuniting director Danny Boyle with writer John Hodge, producer Andrew MacDonald and most of the original cast, T2 revisits Leith 20 years after 1996’s Trainspotting. Now in their mid-forties, the film’s four protagonists are forced to confront the passing of time while coming to the realization that nothing much has changed. Begbie (Robert Carlyle) is still a frothing psychopath, Sick Boy (Jonny Lee Miller) – who now goes by the name of Simon – is locked into running his auntie’s decaying pub and Spud (Ewen Bremner) is still addicted to heroin. Even Renton, who had left Edinburgh to begin a new life in Amsterdam at the end of the first film, finds himself back at his parents’ house after the failure of his marriage. 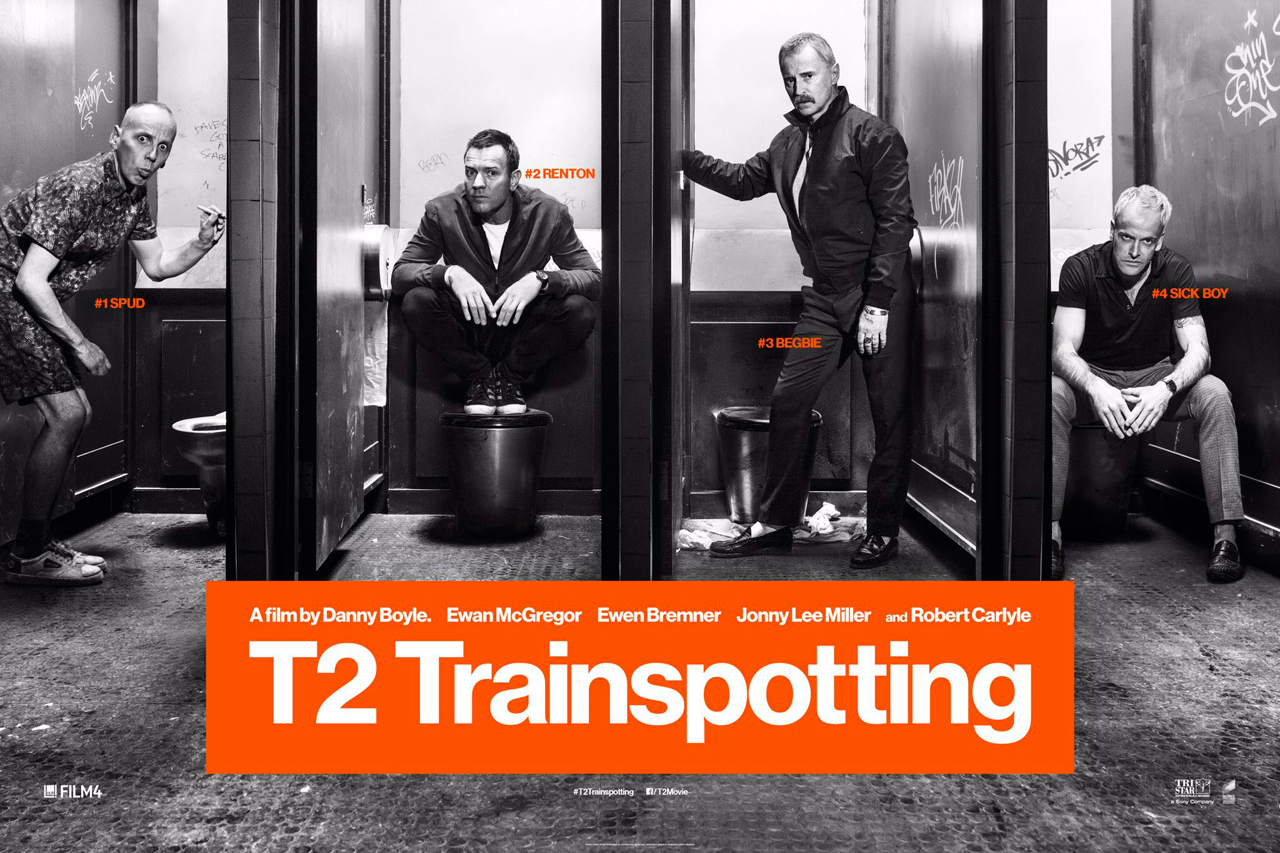 The grimness of the characters’ new lives is shot through with rose-tinted glimpses of the past. We see stylized flashbacks of the boys’ halcyon school days as Lou Reed’s ‘Perfect Day’ shimmers in the background, and watch Renton and Sick Boy running wild through the streets of Edinburgh, faces burning up with youthful hedonism.

But Trainspotting is not The Wonder Years. For every golden moment, the audience is fed a hard-hitting dose of past trauma or an even grittier jolt back into the present. T2 is a nostalgia trip, but one where the specter of history exists to exorcise present-day demons – and only when these dirty, bloody, violent tasks have been carried out can the cast start finally start living.

Aside from his desire to pay back the drug money he stole from his friends in the first film, one of Renton’s most poignant personal battles is played out with his cathartic relationship to Iggy Pop’s ‘Lust For Life’ – an adrenaline-filled trigger point in the original film. On returning home to his father’s house, we see Renton fire up his record player, only to abruptly stop the song after just two seconds – his emotional connection is too painful. It’s when Renton has finally put all his demons to rest that he can listen to the song in full – and revisit happier times – which is a scenario that will no doubt resonate with any music fan who has ever experienced, well, anything.

A clutch of the original soundtrack’s songs reappear in different forms to highlight specific moments in the film. Underworld’s unforgettable ‘Born Slippy’ has been slowed down, much like the film’s flesh-and-blood protagonists, to accompany the warped fever dream of Simon and Mark’s one-off heroin experience. ‘Lust For Life’ has been given an aggressive reboot by The Prodigy, and Brian Eno’s ‘Deep Blue Sea’ is no longer defined by a stomach-churning shit-filled toilet.

Composer Rick Smith was tasked with bringing the soundtrack into the 21st century and although it’s great to see Wiley’s ‘Wot Do U Call It’ make an appearance, its usage – soundtracking a shoplifting scene – feels misguided or, at best, try-hard. However, Young Fathers – who Smith has described as “the modern heartbeat” of the film – pop up on more than one occasion to rep Edinburgh, and the inclusion of Wolf Alice, who Smith found out about from his daughters, feels nicely sentimental.

It’s not all good news though. T2’s lack of female characters is a disappointing missed opportunity – Kelly Macdonald and Shirley Henderson, two of the stars of the first film, have oddly been demoted to supporting roles. It is also largely bereft of topical references. While Trainspotting nailed the “cool Britannia” zeitgeist, despite a cursory mention of gentrification, T2 feels completely detached from any kind of socio-political context. But Trainspotting was always about the characters, and they certainly make a welcome return.

Writing a celebrated sequel 20 years later can be no easy task, but Danny Boyle has shown that nostalgia can be the perfect drug – only if administered correctly.