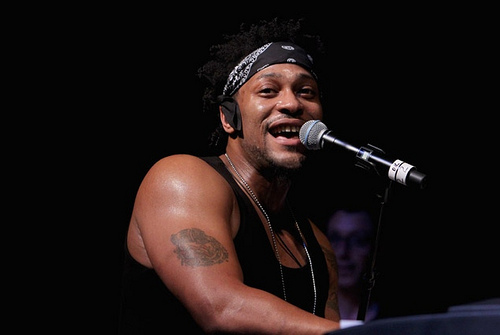 Unlike UK counterpart the MOBOs – normally about as riveting as a particularly sedate episode of Sunday Worship – the BETs are often essential viewing.

D’Angelo stole the show with his first televised performance in twelve years, and it was a pretty mercurial performance. The ‘Untitled’/’Sugar Daddy’ medley showed D’Angelo’s pipes are still in exceptionally good shape, and he looked thoroughly assured fronting a full band.

In a lighter moment, Samuel L. Jackson and Spike Lee clubbed up to perform Watch The Throne juggernaut ‘Niggas In Paris’. Their take, accompanied by images of Jackson in a purple wig, falls somewhere between Statler & Waldorf and PJ & Duncan. Kanye, sitting pretty in the audience, looks unsure whether to laugh or weep.

Final treat: Kanye West gets a taste of his own medicine when collecting the award for Best Video for ‘Otis’, courtesy of best bud Jay-Z.