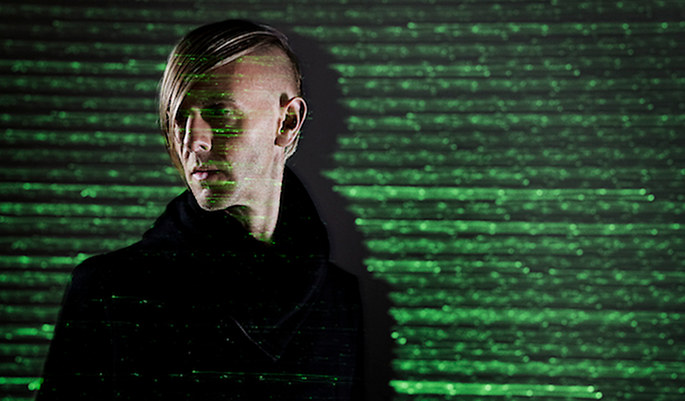 This month, Richie Hawtin issued his first set of new Plastikman recordings in over a decade.

Entitled EX, the album is a recording of a well-publicized comeback performance at New York’s Guggenheim Museum last year, and it’s the best thing he’s done in years. We can’t really begrudge Hawtin for turning his back on the stony (and yes, occasionally a little joyless) techno he cut his teeth on, in favor of a new haircut, new continent and piles and piles of money, but it’s bloody encouraging to hear him bleeping once more.

Early on in his career he was a pioneering (if sometimes controversial) force, penning the kind of wormy techno and serene “intelligent” electronica that informed a throng of wide-eyed producers (myself included), dragging them kicking and screaming out of their grubby bedsits into basements, fields and clubs across the world. He was incredibly prolific too, surrounding each of his acclaimed 12”s and albums with scattered, varied remixes and low-key recordings under a plethora of different monikers, as well as somehow finding time for a long list of collaborations.

It certainly helped that Hawtin had a reliable home for his tracks with Plus 8 (which he ran with long-time Windsor-based associate John Acquaviva), and later M_Nus, and up until the tail end of the 1990s, Hawtin’s very specific brand of very minimal techno was a worthy soundtrack to psychotropic nights in large, European warehouse spaces.

We’ve unearthed some of the very best of Hawtin’s lesser-known gems, from his under-appreciated Chicago-style bangers under the Jack Master moniker to his sizzling ambient explorations alongside FAX man Pete Namlook. This of course means that canonized tomes such as Sheet One and Dimension Intrusion aren’t included, and we’ve also tried to mostly opt for tracks that weren’t included on 2010’s fantastic (and incredibly comprehensive) Kompilation.

States of Mind was a collaborative project between Hawtin and his Plus 8 cohort John Acquaviva, and ‘Elements of Tone (Richie’s Dream Mix)’ is the opening track on the label’s very first release.

Being positioned only spitting distance from Detroit in Windsor, Ontario, the duo’s influences should be understandable. Here they channel the Bellville Three while just about adding enough of their own sparkle (that Mellotron voice patch?) to allow the tune to still stand out, almost 25 years later.

Detroit bleep techno pioneer Daniel Bell’s genius is widely accepted, and hearing him go toe-to-toe with Hawtin and Acquaviva on the obnoxiously banging ‘Technarchy’ 12” is a rare treat. ‘Algorhythm’ is buried away on the flip, but might nail the trio’s cultural exchange even more effortlessly than the lead track, with alien pads, robotic bass and a blipping lead that could kick the steel out of anything Sheffield decided to forge.

Hawtin would achieve notoriety for his F.U.S.E. project thanks to an endorsement from the ascendant Warp Records, but some time before that we had ‘Approach & Identify’, a melancholy bleep monster, underpinned by the kind of gut churning subs usually reserved for carnival soundsystems.

It made sense that F.U.S.E. sat proudly on Warp’s genre defining Artificial Intelligence compilation, flanked by similar-sounding artists (B12, Autechre, The Black Dog) who can’t have been unfamiliar with this crucial first drop.

The compilation From Our Minds To Yours Vol. 1 was an address to the world, showing exactly what Hawtin and Acquaviva’s Plus 8 imprint was actually capable of. And while it was littered with Hawtin-related projects (F.U.S.E., Xenon and Cybersonik just for starters) it also highlighted tracks from Dutch bleep master Speedy J and Detroit’s Kenny Larkin.

Hawtin’s standout moment came with ‘My Reflection’, which he penned under the Chrome pseudonym (attributing the production to Richard Micheals). A balls-out Detroit techno monster, it’s a long way from the stark minimalism we’d hear from Hawtin once he embarked on the Plastikman material, yet still positions the humble TB-303 at center stage.

Dropping the States of Mind moniker in favor of the more literal Two Guys in the Basement, Hawtin and Acquaviva tear it down warehouse style with this gruesome, face-melting AM rattler. Any sensitivity you might have heard in Hawtin’s earlier work is thrown out of the window in favor of workmanlike percussion, distortion and a single, grubby synth line. No frills necessary.

In 1991, Joey Beltram was probably most notorious for introducing the world to the hoover sound, when he and Edmundo Perez emerged with the influential ‘Mentasm’. It’s hardly surprising then that the duo ended up running into Richie Hawtin, and while ‘Vortex’ isn’t quite as slap-to-the-face brash as ‘Mentasm’, it’s not far off. The cheeky synth bass (which I’m going to guess is a Roland Alpha Juno 2) almost dips into hoover territory on a few occasions, but just stops shy of total ridiculousness.

Another solo excursion for Hawtin, Circuit Breaker was a way for the Canadian producer to exorcise some of his big room techno demons, and ‘Overkill’ might be his finest attempt. Lightning fast and with the kind of bassline that a ton of bricks would find lacking in subtlety, there’s a damn good reason why the center labels read “WHEN THIS SONG ENDS… SO WILL YOUR NEEDLE!”

Spawn introduced another techno mainstay into the fray, with ex-Psychic TV acid fiend Fred Gianelli producing alongside Hawtin (and occasionally Dan Bell). They didn’t release a great deal in their short lifespan, but ‘Tension’, from their debut split (with Circuit Breaker, no less) is pretty much all they needed, juxtaposing Gianelli’s well-worn acid squelches with Hawtin’s booming 909 rhythms.

Hawtin only used the R.H.X. moniker once, for ‘Lost Times’, which appeared on Radikal Records’ D-Jam USA compilation (along with Joey Beltram, Juan Atkins and others). Understandably, the track has more of a discernable Detroit bent than maybe Spawn or Circuit Breaker, but it’s no less worthy of our attention. 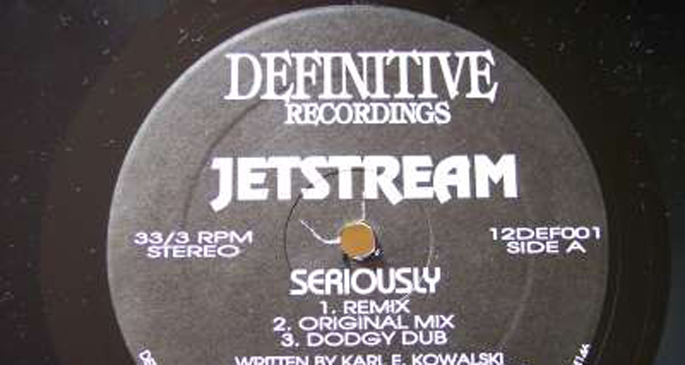 Jetstream (aka Karl E. Kowalski) only notched up a single release, but somehow he managed to rustle up a remix from one F.U.S.E., and it’s a goodun. Admittedly it’s a tough tune to get hold of now (it’s not even on YouTube), but thank goodness for Beatport eh?

Believe it or not, Hawtin boshed out not one, but two remixes of The Shamen’s notorious pill-munching classic ‘Ebeneezer Goode’, and they’re both absolutely top notch. The euphoric ‘Trance Dub’ is the pick for us, as it highlights a time (which Joe Muggs’ recent list goes deeper into) when trance actually wasn’t a dirty word. Sadly the only YouTube footage is of a homemade extended dub (the original track is a swift six minutes long), but we’ll take what we can get.

Another 12”, another short-lived solo moniker for Hawtin. Up! only lasted through 1992, but gave birth to the excellent ‘Spiritual High’ 12”, which was backed with blissful dark horse ‘Night Flight’. ‘Spiritual High’ remains a well-known classic thanks to its inclusion on Warp’s Artificial Intelligence comp, but ‘Night Flight’ betters it simply by its restraint.

As aggressive as a bruised return to The Last House on the Left, ‘AC3’ is not for the faint hearted. Kiss goodbye to your distant 303 melodies or even your big gut-churning basslines – here we’ve got a drum machine, a bloody great pong sound, and very little else. But who the fuck needs gloss anyway? When noise dudes decided they wanted to make techno, why exactly did it not end up sounding like this?

Easily one of the finest tracks in Hawtin’s non-Plastikman canon, Jack Master’s ‘Bang The Box’ is a cavernous Chicago-style monster, sounding as urgent and as fresh today as any time previously. Sparse and economical, Hawtin doesn’t need much here to coax the elements into perfect jackin’ house harmony.

Hardtrax (also known as The Hard Brothers) was a familial side project for Richie, teaming him up with his brother Matthew. Their debut was the single sided 12” ‘Hardphunk’, which shows a little of the restraint and refinement Richie would show in the years that followed.

Pete Namlook’s FAX imprint was far too easy to pass off as ambient hippy nonsense, and those who did were ignoring a wealth of ambient treasures, not least Namlook’s excellent collaborations with Hawtin under the From Within moniker.

‘Homewood Bound’ might be their most successful team-up, and offsets Namlook’s gorgeous cascading synthesizers against Hawtin’s unmistakable (yet slowed down) drum machine rhythms and F.U.S.E.-style basses.

Hawtin made a lot of remixes, but few were quite as bizarre as his take on Mowax band Attica Blues’ trip hop anthem ‘Blueprint’. Hawtin takes the track’s rhythmic backbone and adds double time 909 elements to nudge it into the Plastikman zone without being totally blatant. An occasional squelch from the 303 is the only other clue that it’s Hawtin tinkering on the boards, and it’s a refreshing look.

We’re not exactly sure why Plastikman’s rework of Dutch techno collective PWOG’s ‘Kraak’ has been doomed to obscurity, as it’s one of his more unusual versions. Instead of merely emerging with a lazy edit, Hawtin conjures up an ominous, tuneless dub that sounds a bit like ingesting too many conflicting substances and sitting in a corner for a few hours, wondering why time isn’t working properly.

Concept 1 was Hawtin’s attempt at channeling the deep, minimal dub techno developing in Berlin, and it still stands as some of the producer’s most convincing material. This flipside from the series’ first 12” is deep, dubby and destructive, anchoring its echoing percussion around an oscillating warble that sounds not unlike a muted police siren. Unfuckwithable.

Apparently unhappy with how it sounded (for one reason or another), Hawtin pulled the release of ‘006’ before it actually came out, leaving only a few test pressings in the world. Thankfully some kind soul actually ripped the audio, allowing anyone with an internet connection to hear the grinding warehouse techno on offer here. It’s clear that Hawtin’s regular trips to Birmingham had resulted in something of a cultural exchange.