I’m 20 minutes into an interview with Tim Hecker and conversation has turned to digital technologies and the problem of abundance. “I could have written those choral scores for 800 different voices, or instruments, or Fender Rhodes. I have 10 kinds of pianos on my computer. I have a real piano I can use. I am just lost with infinite choices and it’s like more and more of a problem, where constraint really matters, and omitting really matters, and putting on horse blinders really matters”.

It’s early morning in LA, where Hecker says he’s feeling a little foggy. “Because without that you’re fucked, like, literally. I feel like there is no path forward. You know, the end result is paralysis, and stagnation, and questioning.”

The producer-composer-artist – maybe you could also call him a curator – is about to release his first record for 4AD, Love Streams. The record features arrangements and input from the likes of Ben Frost, Jóhann Jóhannsson, Kara-Lis Coverdale and Grímur Helgason. On top of that there’s the Icelandic Ensemble Choir and an entire spectrum of layered and rootless scores, recordings and tones that have been moulded and manufactured to sound like nothing you would ever encounter in ‘nature’, whatever that is.

Listening to Love Streams, there’s a weight and complexity to its sound that makes it hard to focus on anything else – there’s almost too much information. The filtered and incoherent choir voices on tracks like ‘Music of the Air’ and ‘Violet Monumental I’ surface in glistening fragments, like refracted light. The arrangements were adapted from 15th century choral motifs using Melodyne software, with Hecker stretching the melodies into what he calls “mutant pieces”, which Jóhannsson arranged for an eight-piece ensemble.

“It’s like a surface gleaning of little digital MP3 gems, and you’re harvesting them in and then, ‘Oh, this Josquin des Prez is the most beautiful ruby I saw,’” says Hecker of discovering the Franco-Flemish composer whose work he adapted for Love Streams. Regarded as one of the most prolific and inventive Renaissance composers, des Prez is celebrated for his innovations in polyphonic vocal music made around the turn of the 16th century. Hecker, whose studio-based process is rooted in the structureless atmospherics of psychoacoustics referred to as ‘ambient’, has only recently begun to work with the voice as a material. “It’s that kind of very naïve, playful gleaning of this beautiful digital audio surface in the infinite MP3 archives,” he says, “or something like that.”

Being dubious about the sound and culture of ambient music (which you could just as easily call ‘bro music’ based on the dominant demographic of its producers), I’m prepared to be affronted by Hecker from the outset. A recently published book by Seth Kim-Cohen called Against Ambience gave me fresh validation in my general distaste for ambient; its gesture towards political transcendence and disregard for social responsibility being exposed as a luxury enjoyed by people of privilege. But Hecker is an artist who isn’t stupid. In fact he’s very smart, and pretty self-aware. “I mean, that sounds to me like a rehash of the Adorno-Benjamin debates in the 1930s about politics and art,” he responds when I lay out the book’s criticisms, “and [whether] art exists autonomously from the burden of politics and struggle, and a whole bunch of societal issues. I don’t know, I need to read that article, because to me that doesn’t sound like anything particularly fresh.”

Though my engagement with Hecker has been fairly cursory until now, I saw him perform at Unsound in 2013 with Oneohtrix Point Never, a collaboration that materialised in a 16th century church in Poland’s medieval capital, Kraków. The combined noise of reverb and choral patches made the whole building shudder. “I think it’s hilarious to play in a church,” says Hecker, responding to a suggestion that ambient music presumes the impossible idea of existing outside of a political or social context. Hecker thinks there are more interesting things to think about beyond that. “To play the same chord structures that have evoked deities for hundreds of years, and to approach it in a playful manner which confuses that – for me, that’s an interesting zone. Like, what are you doing, are you invoking God, or are you not? Are you invoking some secular, scientist, effectively nihilist approach in terms of spirituality? I don’t know. I like that liminality. I like that confusion. I like that indiscernibility that something like that seems to proscribe.” 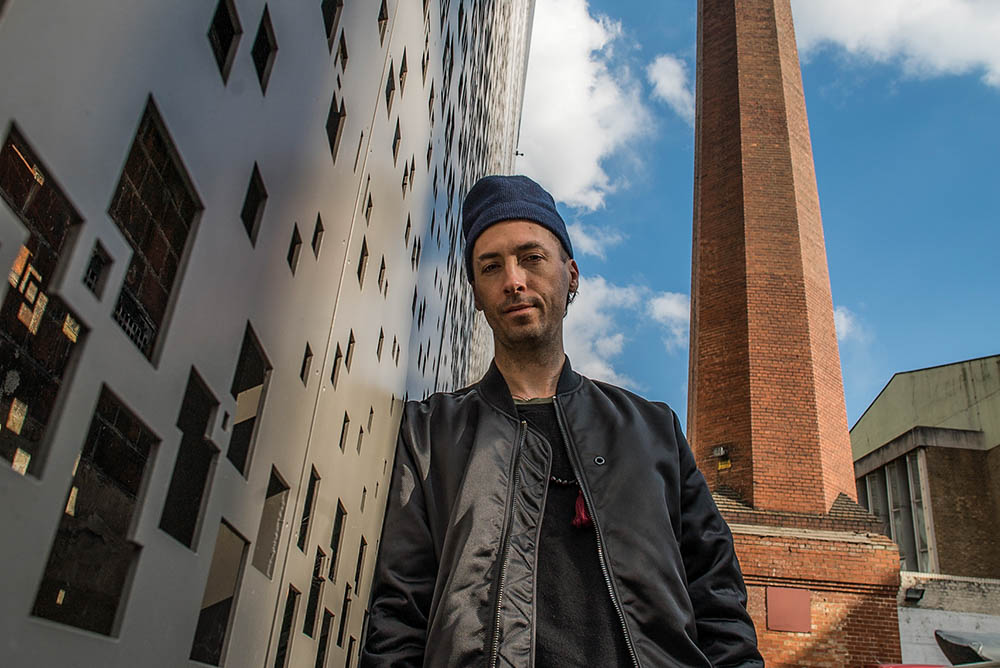 There’s certainly something funny about Tim Hecker’s work, a droll humour that’s laced through Love Streams’ track titles and sequencing, like placing ‘Castrati Stack’ before ‘Voice Crack’ – castrati were male singers whose voices were preserved in their unbroken upper registers by castration, a practice that persisted until the 19th century. Then there’s ‘Bijie Dream’ and ‘Collapse Sonata’, referring to an incident in China’s Guizhou province where an 80-strong police choir was captured on camera falling through the floor of a faulty stage in Bijie Grand Theatre. “I think the Chinese choir was just a kind of metaphor that started to take over,” explains Hecker, “like some fog over my brain about the ‘Chinese dream’, and about musical utopianism, and the fact that three choirs in 2015 collapsed, all celebrating the dream, as far as I understand it.”

A still of the scene in Bijie appears on the cover of Love Streams, blurred and blown-out in what seems like a watercolour of vivid blues, pinks and whites. The human figures glow like spectres in the transient mirage of the moment before the fall. “It became some kind of weird metaphor [for] the precarity of music-making, on a bunch of levels. It hit all the right notes of the enigma that I’m kind of intrigued by.”

The album’s opener, ‘Obsidian Counterpoint’, comes as some kind of oscillating electrical signal buoying a fragmented edit of a woodwind instrument, suddenly fissured by a percussive thrust doused with the residue of Pro Tools post-production. Describing the track like that, there’s an assumption that I can tell the difference between the analogue input of the track and the digital-technological one – but I can’t. With the increasing ubiquity and affordability of computers and digital software, like that which he used to translate des Prez’s scores, Hecker has no interest in dividing the physical from the virtual.

“I feel like the debates about source material, through sampling, have really been blown away by more advanced ways of assessing and working with digital audio,” he says. “I don’t want to set up a digital-analogue divide because I find the most interesting things confuse the two, like hybridity or in-between. It’s easy to get wrapped up in the means of expression, and I feel like it just keeps coming back to confusing that stuff and having abstraction.”

Hecker consistently refers to sound as a “plastic material” to work with; a tactile object that’s been shaped into its current form as Love Streams. Here he presents the sculptural mould of the contemporary creative producer, where it’s more what one cuts out than what one includes in a work that matters. He talks about the misguided notion of ‘autonomy’ or ‘agency’ in a reality that is always mediated, filtered and constrained. “I’m here banging my head sometimes with an interface and it just doesn’t feel natural,” he says. “It doesn’t always feel good, it feels hideous sometimes, but that’s the tableaux that I use and it’s something that you’re stuck with to a certain extent if this is your means of expression. You’re stuck with these situations in which you don’t have full agency or control.

“It’s like a fight, I go into the studio and I feel like I’m fighting against a lot of things. I fight against myself, against lethargy, and, ‘Fuck, I could play 40 types of zithers, and what do I do?’ It’s a fight to dial into something that has meaning.”

By ‘meaning’, Hecker isn’t talking about achieving some kind of overarching truth or “trap of transcendence” that my own definition of ambient music presents, but more a sense of the self and the world within a reality that makes no sense. “I wouldn’t say ‘higher’ meaning because that invokes some kind of theology, but I would say the personal quest of ‘making’. I feel more like a child at play than an actual theologian promising anything. It’s the opposite, it’s negation of promise, and I see it as a plastic material to mold with rather than provide answers, I guess.”