Kentucky Route Zero was met with critical acclaim when its first episode appeared in 2013. The indie game’s unique blend of stylized visuals and haunting music made it an instant cult hit, and the latest installment, which arrived in June, is the series’ best to date. Lewis Gordon talks to the game’s composer Ben Babbitt about how he embarked on his journey and how the latest episode has helped him find his voice in the most unlikely place.

The latest act of Kentucky Route Zero finishes on a theremin solo. Two of the lead characters are talking over it. In any other video game, this finale would be considered an anti-climax. In this game, it’s a picture of control. Disappointment is embedded in Act IV of Cardboard Computer’s acclaimed episodic journey. You might call it an adventure game. Some would call it a point-and-click adventure game. But it’s much more than those archaic terms can muster. Kentucky Route Zero is a dreamlike version of contemporary America filtered through a playful, Lynchian surrealism. It’s a parallel reality governed by a different set of rules. Characters are ensnared by debt and poor working conditions; economic decline has left an entire region marginalised. But the weighty subject matter is handled lightly, punctuated by bizarre flourishes. A bear might wander through an open-plan office, or a ghost ship populated by cats might float past on the river.

The game’s soundtrack is just as multi-faceted, moving effortlessly between serene Eno-esque soundscapes, beatless synth workouts, and lilting folk music. The patchwork approach is one that composer and Cardboard Computer co-founder Ben Babbitt cultivated outside of his video game projects. “The way that I work is just to generate lots of material kind of all the time, not necessarily knowing what to do with it or where it will go. And then sometimes years later it makes sense to use it in a particular place,” he says. “It’s a nice way to work, and it results in this massive collection of things over years and years from many different places.” 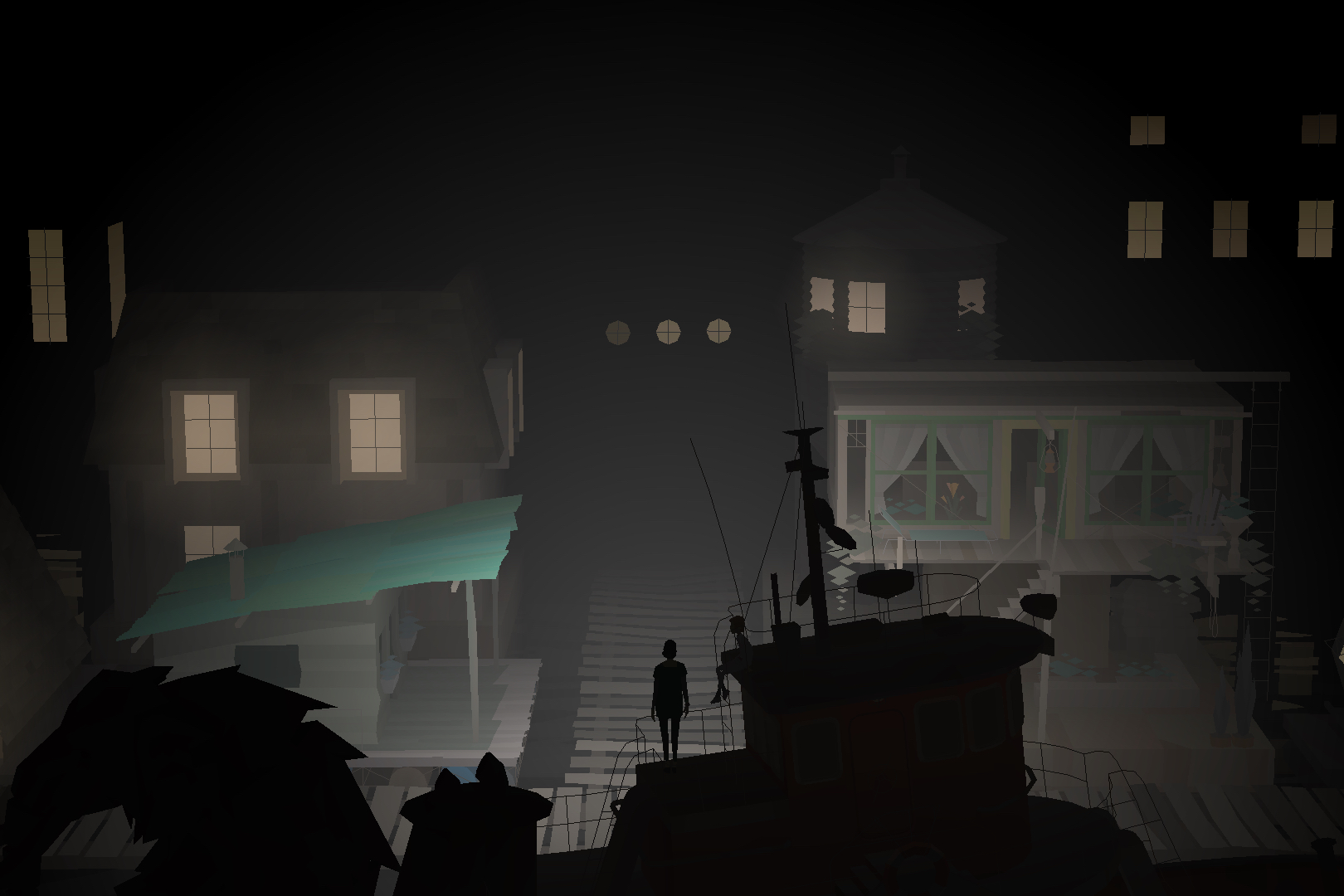 Babbitt dropped out of high school at 17 and left his home in the suburbs to live in Chicago. He was, in his own words, a “terrible student”, but a friend of his owned a studio where he began working when he wasn’t touring with his band outside of the city. The next year he left town and started travelling, picking up volunteering work; he even wound up on a sheep farm in Iceland. “Some of those trips changed my thinking about things. I came back and I decided I did want to study music.”

He enrolled at the School of the Art Institute of Chicago, where he met Jake Elliott and Tamas Kemenczy, the two developers with whom he would form Cardboard Computer. “I loved being there and having the opportunity to curate a curriculum for myself,” he recalls. “And in the meantime making music with all these other people outside of school and playing a lot of shows and touring. The scene in Chicago at that time felt pretty open and supportive.”

Babbitt’s friend Theo Karon set up a recording studio in the basement of the shared house where he lived for six years, “a little place where many different projects would start springing up,” he continues. “And at the time Theo was primarily an analogue tape engineer. He was really into that stuff, so he didn’t even have a computer down there. I made all the early Kentucky Route Zero stuff there.”

The backdrop to those early recording sessions goes some way to explaining the mood of the game and the contribution Babbitt’s soundtrack makes to it. There’s a timeless quality, a sense of warmth and wear; it’s a digital product that feels analogue in nature. Partly, that’s down to Babbitt’s use of old standards, the reworked folk songs that appear throughout the game, but it’s also to do with the subtle imperfections in the music; the audio feels alive, like a mirror to the characters. 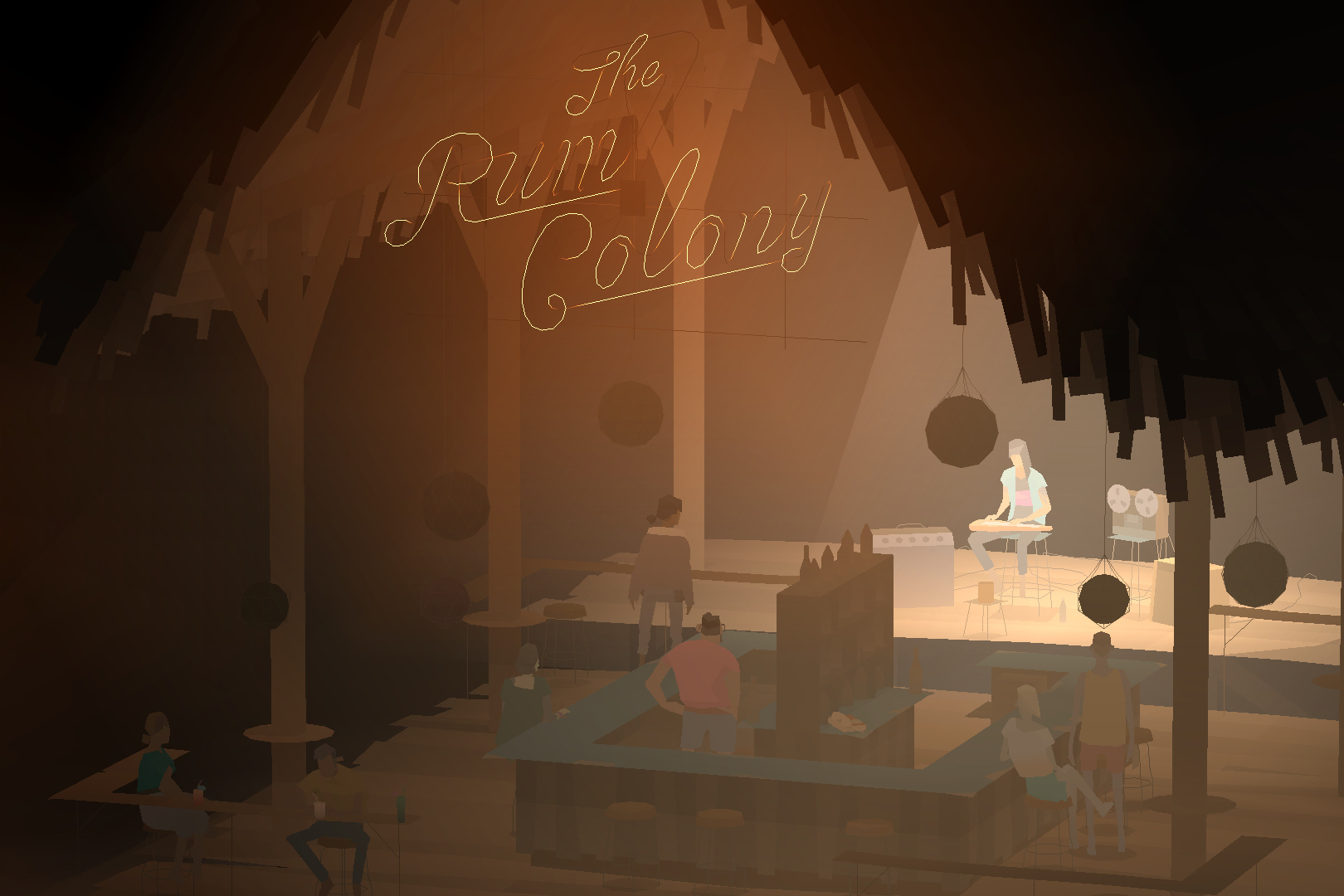 That goes right down to the sound design, which Babbitt now works on in conjunction with the music. “It’s a whole other way of working that I had never done before,” he says. “When we were finishing Act III, I was on tour in Europe with Pillars and Tongues and I was having to do work on the game. I had quite of lot of sound design left to do and ended up making many, many field recordings over the course of that tour in different countries. There are field recordings from skipping stones in Italy, and a creaking fence in France. We ended up in Serbia and Croatia and the Czech Republic – there are things from all over the place that ended up in this game about Kentucky.”

Musicians also appear in the game as characters, with performances playing out within the scenes. A character called Cyrano plays a lap steel guitar at The Rum Colony, a kind of Hawaiian tiki bar situated on a subterranean river; his slide guitar playing is reminiscent of Daniel Lanois on Brian Eno’s Apollo: Atmospheres and Soundtracks. “After the mixes were done for those, Theo Karon and I bounced them to a tape machine and slowed them all down so they’re even more murky and narcotic. Everything is better slowed down,” he explains. The musical detours give the game’s people and places a history that stretches beyond the player’s experience. “It really has to do with trying to create a sense of a whole world and many different lives, not just this tiny little bubble surrounding the main characters. You just happen to encounter them at that particular moment.”

One of the musical performances in the game has given Kentucky Route Zero perhaps its most widely discussed and admired scene. As Junebug and Johnny take to the stage at The Lower Depths Bar in Act III, with Junebug dressed as a Loretta Lynn-esque faded country star, something strange begins to happen. After the first kicks of the drum machine, the roof of the bar lifts off to reveal the constellations set against the night sky. The player is presented with three verses of ‘Too Late To Love You’ for Junebug to sing in her reverb-drenched soprano, and as you select the lyrics you dictate the direction of the song’s tale of heartbreak. It’s a startling piece of interactivity.

The interactive song riffs on an idea first seen in the 1997 game The Curse Of Monkey Island, Babbitt points out. “The mechanics of it are different, but the idea of making it participatory was interesting, rather than making you just sit and watch the performance.” But giving the player control over Junebug’s song presented its own challenges. “It had to work with this weird mechanic with breaking up the verses, which ended up meaning recording a super-long song, chopping it up, and making it into these triggerable audio files. I don’t even remember how many fucking verses it was, but it was many – I think it was nine different verses.”

Junebug’s performance has led Babbitt onto his next project outside of the game: he’s recorded an entire album as Junebug. The record continues to explore the synth-pop sound palette of ‘Too Late To Love You’, but some moments are darker and more industrial, while others reference Junebug’s country persona. It’s not the first time the world of Kentucky Route Zero has spilled out into other projects. Will Oldham, aka Bonnie ‘Prince’ Billy, contributed voice work to Here And There Along The Echo, a guide to the Echo River found in Act IV.

“[The Junebug record] feels connected to the other kinds of intermedia outgrowths from the game we’d already done, so it’s not unprecedented by any means,” says Babbitt. But a whole record? I can’t think of many, or any other examples of a character from a video game releasing an album. “It has everything to do with singing for me,” he explains. “And finding the sound of her voice, so to speak. She’s not a human, she’s an android. It sounds super nerdy, but an effects chain popped into my head like an image that I knew I wanted to try. I probably set it up the next day and just started singing things through it, and when I heard the voice coming out the other end I was completely bewildered.”

He’s right, the voice is bewildering. It sounds mostly like a woman, but with aspects of male intonation, creating a tone of expression all of its own. “There really was an aspect of it that had the rush of putting on a dress or make-up for the first time and feeling my body and my self-perception in a different way, but in the invisible voice world – like vocal drag.”

He continues: “It’s also about finding personal resonance with some of the identity politics and issues coming up more and more in culture right now, and accessing some of that from the insularity of fiction in some way. Which, I guess, can be seen as an easy way to deflect responsibility – but I also see it as using the poetics or openness of something like ‘the pop song’ as a form. And in this case I see it as an opportunity to think about all of these things by way of making, and also by fully indulging impulses I’d probably otherwise shy away from – the reasons for which I’m understanding less and less now.”

The stark vocal transformation was also born from Babbitt’s own shyness about his natural voice. “It was a source of a lot of discomfort when I was younger and I stopped singing for a while because of it,” he says. “Then I did this Junebug song and found this voice and really liked how it sounded, it felt expressive to me in ways that my voice had never felt to me.”

It’s strange to hear Babbitt’ misgivings about his voice, as his vocals are pushed to the fore, untreated, many times throughout the game – and they pack an emotional punch. In the penultimate scene of Act IV, Babbitt, accompanied by just a guitar, sings, “This world is not my home, I’m just passing through.” It’s a moment of crushing openness in the game, and Babbitt’s performance is disarmingly graceful.

As those lyrics hint, the game itself is about transition. The subterranean setting of Route Zero is a spectral space, a gateway into society’s subconscious. For, Babbitt it’s been a process of delving into his own subconscious too. On ‘Static Stations’ he croons, “I like the feeling of finding a new face/ And a new voice/ To learn how to recognise / The static between stations.” With the Junebug record, he’s doing just that, stepping outside of the game and into a new identity.

Read next: It Follows composer Disasterpeace on his intimate soundtrack for Hyper Light Drifter