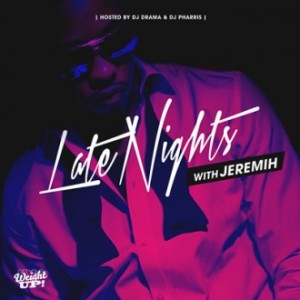 Look, let’s not front – it’s probably the case that you, like I, know Jeremih from ‘Birthday Sex’ and his less memorable later singles, but haven’t exactly absorbed his albums. That’s fine, it’s the way of the world. All you really need to know is that Late Nights with Jeremih is one of the best r’n’b releases of the year, and deserves all of the praise that it’s getting from certain quarters.

Like Frank Ocean’s Channel Orange, it’s a balanced synthesis of classic pop, soul and r’n’b (Jeremih has gone on record quite frequently at being heavily influenced by “true musician artists” like Stevie Wonder) with modern production. Though unlike Channel Orange, which very much fancies itself as an album album, with concepts, revelations, interludes and the year’s most infamous liner notes, Late Nights with Jeremih is content to simply be a session of great songs for twilight, most of which clock in at well under four minutes.

It’s a collection that goes by as quickly as the late nights that it celebrates, but there are obvious stand-outs. Producer Mike Will has been combining dance music filters with heavy 808 beats for a while now, usually as a simple but effective way to create tension (see Gucci Mane’s ‘North Pole’, Future’s ‘Turn on the Lights’ , Juicy J’s ‘Bands a Make Her Dance’ and more), but on ‘773 Love’ he provides one of his best beats yet, immersing a crackly riff in warm low pass filters and slowly letting it emerge, while adding layers of synth so subtly that unless you really pay attention, you’ll never notice them. Jeremih gives easily his most memorable vocal performance of the album, changing tone between dramatic and casual (the way he sits back for the second chorus’s “7-7-3, 7-7-9, love” is just killer), before going acapella for the song’s close. When Will appears again, it’s on the slamming club jam ‘Girls Go Wild’, another Late Nights highlight.

Elsewhere, Late Nights gets weird, though never loses track of the starlit feel that makes it work so well. There’s often post-production on Jeremih’s voice, usually filters or simple pitch-shifting, but on ‘Fuck You All The Time’, he duets with Natasha Mosely – herself also vocally manipulated – and a second pitched-down version of himself over a quiet, at times barely-there beat driven by finger-clicks and synthesised chimes. In the age of James Blake and the xx’s ultra-spacious music, it feels exactly how artists from the r’n’b world should be taking cues from the relative underground. Closer ‘Letter to Fans’, meanwhile, finds Jeremih getting misty-eyed over a beat that pairs trap-style “hey” shouts with finger-clicks, watery piano and little else. When the kick drum comes in, it’s practically transparent.

Miraculously, given how most major label hip-hop albums pan out in 2012, over its 18 tracks Late Nights rarely drops in quality. ‘Ladies’ sees Jeremih team up with Twista and AK on an ode to the finer sex every bit as fun as ‘Girls Girls Girls’, based around a scratchy sample that sounds like it fell down the back of Just Blaze’s couch in 2002. ‘Keep It Moving’ updates A Tribe Called Quest’s ‘Electric Relaxation’ for the reverb’n’b age, while ‘Rated R’, ‘Late Nights’ and the Tricky Stewart-helmed ‘Feel the Bass’ could easily be bonus tracks on The Weeknd’s House of Balloons. Sure, you have to put up with a more-stupid-with-every-verse 2 Chainz appearance on ‘Outta Control’, but you can’t have it all – this is 2012, remember?