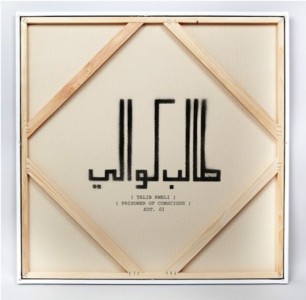 The title of Talib Kweli’s fifth solo LP, Prisoner of Conscious, finds the 37-year-old rapper confronting the stereotyping of his craft. Since debuting in 1998 with Mos Def as Black Star, the Brooklyn MC has grown with but never out of a tag that has increasingly become a hip-hop pejorative.

“People consider conscious rap now, in hip-hop circles, to feel condescending or feel like not a part of the mainstream,” he explained to NPR last month. “So the challenge for me is, “How do I be as good or better than these rappers out here?” and “How do I stay relevant with my music still being considered conscious?””

Prisoner of Conscious proves those goals to be difficult propositions. For Kweli, remaining true to his lyrical style, making creative musical decisions, and staying relevant in the hip-hop conversation seems to be an elusive, pick two-of-three calculation.

In some ways, Kweli is the same rapper as he was on Black Star or Train of Thought or Quality: his lyrics are as dense and writerly as ever, and similes and metaphors abound. If you were to take a shot for every use of “like” or “as,” you’d quickly end up in the hospital with alcohol poisoning. Unfortunately, the storyteller of ‘Respiration’ or ‘Joy’ is mostly absent, replaced with a rapper out to prove that he can outrap anyone — but to what end? The lack of oxygen in these verses, and the corniness of some of the punchlines (“I smoke these pork rappers so fast they call me charcuterie”) can get exhausting, even for fans who still go in for an old school cypher.

Even when Kweli gives the songs room to breath, like on the ‘Broken Glass’-esque ‘Hamster Wheel’ or the ballad ‘Delicate Flowers’, otherwise entertaining efforts are plagued by weak hooks (“She need to get up off the hamster wheel”) and cringeworthy refrains (“Girls have feelings”). Sometimes, the hooks are just confounding, as on ‘Turnt Up’ (its title a regrettable grab at a contemporary trope), where he raps “Drop it, stop it / With all the soap operas and the soap boxes” — a strangely lifeless chorus from a rapper who is no stranger to soap boxes.

The album’s most perplexing moment is on the battle-ready ‘Upper Echelon’. Kweli raps “real shit back, it’s a miracle, rap been laughable over the last year or two”, a myopic view of a period that has seen the debuts of everyone from Kendrick Lamar to Danny Brown to Main Attrakionz (I’d argue that rap is as exciting as ever). There’s also a reductive, sneering hook, and it’s all over a Masta Ace-sampling beat by one of New York’s finest young producers, Harry Fraud. ‘Upper Echelon’ is a reminder that if you try to please everyone, you will please no one.

Kweli has also said that the critical focus on his lyrics has short-shrifted the instrumentation and songwriting. Musically, Prisoner of Conscious largely stays with the Blaxploitation-sampled soul and boom bap of his early high points, with momentary diversions into highlife and samba (the latter courtesy Brazilian artist Seu Jorge). Production is mostly handled by Stones Throw veteran Oh No and GOOD Music’s S1, with contributions by RZA and J. Cole, who turns in one of the album’s highlights with the Earthtone III-bounce of ‘It Only Gets Better’.

Guest appearances are a mixed bag: Busta Rhymes sounds as if he literally phoned in his verse on ‘Rocket Ships’, Nelly (!) is better than expected, and Miguel does his Marvin Gaye impression on ‘Come Here’. Kudos for bringing in Kendrick Lamar on ‘Push Thru’, but even one of the Compton upstart’s weaker verses outshines the veteran. The song ends up being a microcosm of Kweli’s issues and status in hip-hop: unable to adapt to a world where the best rappers balance streetwise lyricism with radio and club-friendly songcraft.

Ten years ago, Jay-Z rapped “If skills sold / Truth be told / I’d probably be / Lyrically / Talib Kweli.” In his memoir, Jay decoded the lyrics: “Kweli is a great MC — as is Common — and they’ve both carved out impressive careers without big records. They’re great technical MCs, but there is a difference between being a great technician and a great songwriter. I deeply respect their craft, but even the most dazzling lyrical display won’t translate to a wide audience unless it’s matched with a big song.”

Prisoner of Conscious is simply missing the songs it needs, not only to reach a wider audience, but to truly engage its core one. Even though Kweli is trying to confront his critics head-on, from the title on down, the album suffers from the same problems that have plagued his last few efforts. Instead of updating his sound and style for a contemporary audience, Prisoner of Conscious comes off as a series of half measures.