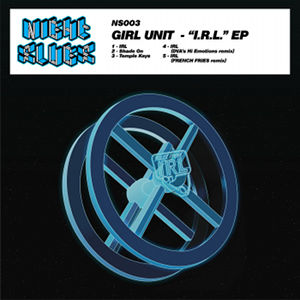 ‘I.R.L’ is basically the sequel to Jan Driver’s ‘Rat Alert’, just when the original was starting to get played out. I always think it’s boring when people talk about individual records in terms of the label they’ve been released on more than they talk about the actual music (see pretty much any Hyperdub review), but more so than the rest of the Night Slugs records to date, ‘I.R.L’ really reflects where the label’s vision of club music is at right now with its big Godzilla chords, scatter-shot drum work and nods to Chicago on the 808s.

‘Temple Keys’ and ‘Shade On’ are pretty vital too, the former taking the Aztec bounce of Joy Orbison’s ‘GR Etiquette’ and adding sun-bleached breakdowns, R’n’B sighs and some serious snap to the drums, and the latter coming from somewhere else altogether with subterranean atmospherics and more of those hard claps and overheating synths.

Closing the EP is two remixes of ‘I.R.L.’ DVA goes for the jugular with wooden drums and big industrial hits that draw inspiration from his past tunes ‘Natty’ and ‘God Made me Phunky’, while Young Gunz’ brilliant French Fries does what he does best, puffing out the original’s bass and adding his own tumbling drums and cheeky beat-box melodies.