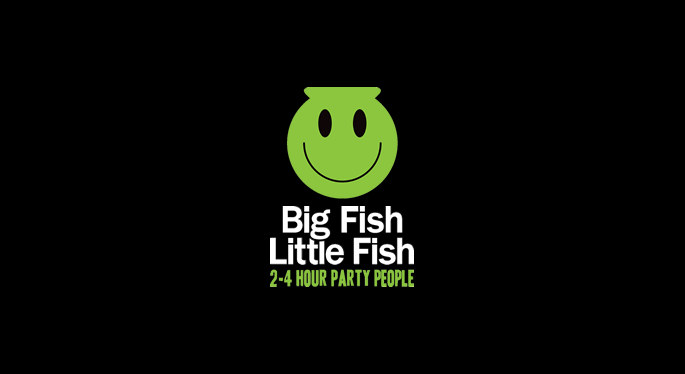 Following in the footsteps of Camp Bestival, Big Fish Little Fish is a family-friendly rave in London booking some of the best DJs around.

Managed by a pair of not-so-reformed rave mums, Natasha and Hannah, Big Fish Little Fish is aimed firmly at 2-4 hour party people (see what they did there?), promising weekend afternoon parties with “great music by established club and festival DJs, with a host of extras to ensure maximum fun for parents and kids”, including balloons, glowsticks, bubble machines, confetti guns and a chill out room, complete – we hope – with beanbags. Sounds more like Space with each sentence, right?

A regular fixture at Big Fish Little Fish is FACT writer Joe Muggs, whose wife Natasha is one of the night’s – well, the afternoon’s – head honchos. Joe told us a little more about the night:

“My DJ career such as it is has been a pretty ramshackle affair, and I’ve played some deeply odd gigs, from a squatted church to a Croatian castle. But I never quite imagined that I’d be playing banging acid to a club full of leaping toddlers, nor watching their mums and dads pick them up, whirl them around and sing all the lyrics to ancient gooey classics like ‘Promised Land’, ‘People Hold On’ and ‘The Sun Rising’ at their kids.

“Looking at it now, though, it seems only logical. I’m a dad of two small children too now, and I’ve long noted how often the madness of parenthood is like raving: the gibbering, the sleep deprived small-hours delirium, the moments of wild delight, the vomit, the falling over. And I’ve had untold pleasure from seeing how my little ones react instantly and viscerally to the music I love: the groove of disco and house, the rollercoaster lurch of a bass drop, the “robot noises” of techno and electro are just as instantly graspable as the melodies of nursery rhymes or kids’ TV themes.

“So, when my wife Natasha met someone (through Mumsnet, naturally) who wanted to start up raves that both parents and children could enjoy, we were intrigued. And when we met Hannah and heard her concept – “Big Fish Little Fish – for 2-4 hour party people!” – we were all over it. Hannah had been a serious raver from back in the day, a regular at some of London’s finest clubbing instututions with a notorious party flat in Camden, and though she’d settled down a tiny bit when she had had her two kids, she felt that there must be a way of keeping a connection to her past life without being a totally flaky rave-mum.

“Before we knew it, Hannah was in business, Natasha was her communications officer, and some of the most ludicrous clubbing experiences I’ve ever had started occurring. None of use could have predicted how much fun it would be giving rave-starved parents the chance to socialise and have a few drinks with proper DJs playing, while their kids ran riot among the bubble machines, glitter cannons and club lighting effects or built pirate paraphernalia in the craft room. Every rave they’ve done has sold out, partly because among others they’ve had dubstep legend Chefal, Nihal, Mixmaster Morris and Ninja Tune’s Strictly Kev behind the decks with the likes of Frank Tope, Rob Da Bank and Hatcha lined up for future ones; all who played so far were quizzical at first but completely won over by the experience.

Stricly Kev, who ended up with a finale of Star Wars music, full-tilt jungle and demented samba rhythms, claimed that “It was one of the hardest gigs I think I’ve ever done, but one of the most rewarding. You’re playing for two totally different audiences, one of whom will be intimately familiar with the music, the other who may have never heard a note of it before!” This was my experience too; for the launch, I’d loaded my bag with “cool wedding disco” tunes – ‘Apache’, ‘Think’, cheesy ska cover versions etc – but it quickly became apparent that pretty twisted electronic music, the bigger the bass the better, went down just as well with parents and kids alike.

“So it came about that I have found myself sitting outside a club in Brixton at half four in the afternoon on a Sunday, watching giddy clubbers in fancy dress pouring out with broad grins on their faces – but without a hint of drug use apart from the sugar buzz from gallons of free Happy Monkey Smoothies going on among the children who were gambolling around them. It was at this point that I thought it would be a good idea to teach my 3-year-old to yell “WHERE’S THE AFTER PARTY??” at them. We meant it as a joke, but as soon as he did, people did actually start discussing where they could go next to continue the fun, and quite a few families started veering towards the pub to carry on. It all felt just a little bit wrong, but don’t all the best things in life?”

The next Big Fish Little Fish takes place at Brixton Effra Social on December 14 with sets from Joe Muggs and Queen of Hoxton’s JC – for more information on the night, head to the BFLF website. Check Joe’s mix for Camp Bestival below.