The month in house and techno: Does Berlin Atonal prove techno can be “high art”?

In the month that London’s ailing club scene suffered its worst blow yet with the closure of Fabric, Berlin chose to recognise techno as “high art” with tax breaks for clubbing institution Berghain. But as Scott Wilson discovers, the city’s recognition of dance music is even more deeply embedded.

It’s official: in Berlin at least, techno is as important as classical music. After a lengthy legal battle, Berghain was last week awarded the same tax status as concert venues. City officials had tried to make the club pay a high rate of 19% on its earnings, claiming that most of the audience go there to get high on drink and drugs and pointing out that the venue has to stage. As such, Berghain was classed as an “entertainment venue”. In its defence, Berghain’s legal team argued that a similarly intoxicating effect could be derived from a concert of music by 19th century composer Gustav Mahler.

The ruling is in stark contrast to Islington Council’s decision to revoke Fabric’s license last week following the suspected drug-related deaths of two men at the venue. Berghain and Fabric are very different clubs: one has traditionally been a home for techno, while the other has also fostered UK-centric styles such as drum and bass and grime, but it’s hard to imagine authorities in Britain awarding the same kind of status to a nightclub – even one that attracts a huge crowd of cash-rich tourists.

Of course, in Berlin, techno isn’t just part of the furniture – it’s embedded so deeply in the city’s upholstery that it’s inescapable. Even on a Friday morning, as commuters make their way from the S-Bahn at Warschauer Straße, you can hear the pulse of tech-house coming from Friedrichshain’s Suicide Circus venue. From Thursday to Monday, young ravers walk to and from the club at all hours of the day and night, and few locals seem to be phased. But does a culture of permissiveness mean that techno should be classed as “high art”?

For the past four years, one Berlin festival has been trying to prove that is the case. Taking place in a disused power station that once powered the East German half of the city, Berlin Atonal places techno DJs alongside electronic artists whose tendencies range from moderately experimental to outright avant-garde. The building, Kraftwerk, is owned by the founder of the city’s famed Tresor club and label Dimitri Hegemann, who ran the first iteration of Berlin Atonal in the 1980s. Now led by Laurens von Oswald, Harry Glass and Paulo Reachi, the festival takes an fresh approach. Upstairs, in a huge concrete space reminiscent of the Tate Modern’s Turbine Hall, synth pioneer Peter Zinovieff and cellist Lucy Railton collaborate on discordant drones, while in the basement, home to the Tresor club, DJs including Ron Morelli and Veronica Vasicka play noisy, abrasive techno late into the morning. Each day begins with a “serious” block of ambient sounds and rumbling bass, and progresses to something akin to the hedonistic experience people expect from Berlin techno culture – albeit slightly more reserved, given the festival’s self-assuredly sophisticated audience.

It’s this contrast that struck me when I visited the festival for the first time last month, on what was the city’s hottest week of the year. At times, the dense, five-day programme felt more like an endurance test, especially in constant 30-degree heat. Headline act Death In Vegas, who performed with Sasha Grey, failed to leave much of an impression with their weary synth chug and self-consciously dark vocals. Kassem Mosse and Mix Mup delivered disappointing ambient music when most people were desperate to dance, while Headless Horseman played the kind of enthusiasm-sapping set someone described to me as “an unforgiving vision of techno.” With the humid air already causing exhaustion, sometimes the programme felt unnecessarily bleak.

But beyond some difficult acts, there were plenty of standout performances. Second Woman’s hybrid of Autechre-inspired IDM and dub techno felt most appropriate for the cavernous main room, as processed beats bounced between the concrete pillars. Lena Willikens’ robust synth grooves inspired more movement than the precise, hypnotic rhythms of Donato Dozzy and Lory D, while Headhunter’s dubstep set offered respite from the industrial mood and Robin Fox’s precise tones and laser show brought colour to the festival’s predominantly monochrome sounds. The highlight of the festival was arguably Alessandro Cortini’s closing set, which combined heartbreaking ambient music with Super 8 footage from his family’s archives. Cortini’s personal touch made for a set as moving as any classical performance I’ve ever seen.

The setting left just as great an impact. Between the cathedral-like main space, the bunker-esque Stage Null on the ground floor, the intimate OHM, brightly-lit Globus and dank Tresor – whose strobe light punctuated the pitch-black space in an intimidating manner – you were never more than a few minutes from whatever form of techno you wanted. Marcellus Pittman represented Detroit, Pinch played dubstep hybrids and Kerri Le Bon blended the influence of post-punk with 4/4. In a hidden side area, which was once the power plant’s control room, a rolling roster of artists played improvised sets on modular synths.

But if you wanted house, footwork or any of the emerging dance genres of the past few years, there was nothing much on offer. In that sense, Berlin Atonal is one the most conservative festivals I’ve ever been to. The main space even felt more like being in a place of solemn worship than somewhere to party. But as a celebration of techno and its adjacent genres – primarily noise and drone – it’s hard to deny that Berlin Atonal is one of the world’s foremost events. There was a palpable sense of community, something lacking from other festivals of its type, except perhaps for Krakow’s Unsound.

For many fans of dance music, which sheds its skin on a yearly basis, watching Porter Ricks play a set of ambient dub techno is going to be as dry as watching the Berliner Philharmoniker perform Mahler’s Symphony No. 8. But perhaps Atonal represents the shift in the type of music that 21st century audiences want to hear in a traditional concert setting. Can electronic music and techno be classed as “high culture”? To classical concertgoers, probably not, but Atonal gives us a preview of a future where techno is widely accepted as being just as culturally significant as a symphony orchestra. You might argue that framing techno in this way makes it seem just as stuffy as classical music, but Atonal’s contrast of cerebral frequencies and good old-fashioned fun pulls it off.

Read next: Are we in the middle of an IDM revival?

More from The Month in House & Techno 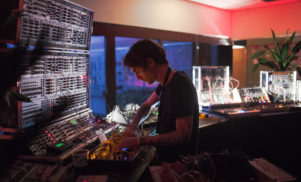 The month in house and techno: Does Berlin Atonal prove techno can be “high art”?