This week, we wrap our judgemental ears around a standout from Future’s self-titled epic, a drugged daze from CasIsDead, and a bizarre R&B turn from nu-metal survivors Linkin Park.

Rome Fortune is back with a hint of grime on ‘Jaded’ while actual-grime producer Mitch teases what could be one of the best albums of the year – let’s hear it! 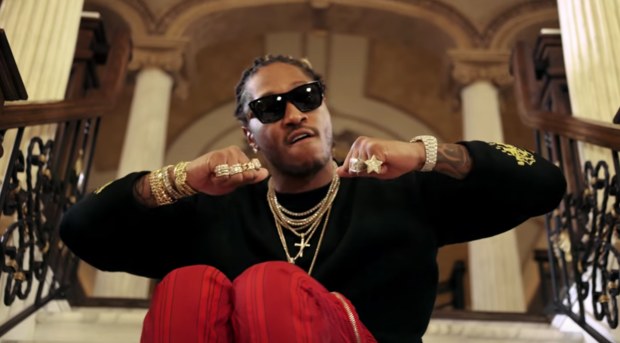 Chris Kelly: After regressing to the mean in 2016, Future returns with a vengeance with his self-titled album. He heads to Spinz’s laboratory for ‘Draco’, embraces his dark side, and starts to have a little too much fun with drugs, guns and women. The way he sings “You ain’t never ever get you bitch back” would be a playground taunt if it wasn’t so nasty. (7)

Claire Lobenfeld: ‘Draco’ is a lesson in resting on your laurels. Don’t be the guy that started his last solo full-length with a bitter-but-biting lyric like “I just fucked your bitch in some Gucci flip-flops” to then start cooing “You will never, ever get your bitch back” on something super same-y and boring. Regardless of whether you’ve been listening to Future since ‘Chosen One’ or ‘March Madness’ or, hell, even ‘Jumpman’, you know Future has better ways of delivering anything from drug-addled despair to rap jubilations like ‘You Deserve It’. So much of the production on Future is outstanding and ‘Draco’ is not even a contender in that lane for best on the album. Yet a quick scan of social media and you’ll see this is anointed hit of the album. The emperor has no flows? (3)

Son Raw: In between DS2 rehashes, Future (the album) delivers the kind of brain-twisting innovations that remind us that Future (the rapper) is more than a vessel for the world’s best break-up raps. If you ever wondered what a synth arpeggio from Homogenic-era Björk sounds like over 808s and miss those days when Future didn’t sound like an Activis casualty, this one’s for you. (8)

Tayyab Amin:  New Nayvadius is so melodic it could be some trap back-to-school nursery rhyme – I nod my head to most of his tunes, but this here chorus makes me bob it side to side with a bounce in my step. He mentions Desiigner but this flow steals the juvenility from right beneath Yachty and Uzi Vert’s feet. Who else could make “Misbehaving wit’ ya freak / Can’t tell she got teeth / I was in her mouth like veneers” sound so jolly? And you know an a cappella outro is a winner for me. (9)

Son Raw: I have zero nostalgia for these guys since I was in middle school in 99’ not 03’, but I’m pretty sure the last thing in the world needed was Linkin Park’s R&B power duet phase. Everything from the bombastic mixdown to the asinine lyrics to the prefab piano chords serve as an incredible argument for quarantining contemporary rock radio for the next 100 years like they did with the Chernobyl site. (0)

Tayyab Amin: As someone who still has many a strong feeling about Linkin Park up to and including Minutes to Midnight, I don’t like this at all and would much prefer it if you went back to giving us Chainsmokers tunes for review. It starts all 2012 Tumblr minimal and finishes wishing it was a Kelly Clarkson track. The entire thing rips off ‘See You Again’ from Furious 7. I don’t even want to know how we got here. (3)

Claire Lobenfeld: I am old enough to think, “In my day, you would be sent to the principal’s office for dressing like that!” when I see pictures of Lil Uzi Vert in a Marilyn Manson T-shirt, so the fact that Linkin Park (WHO I WAS ALREADY TOO OLD FOR) are getting a lite makeover a la Incubus in the early ‘00s has forced me to plot out my “passing on” plans. I can’t really judge whether this is good or bad or whatever because it’s all always sounded pretty crap to me, but hey, get money, FACT pop artist to watch in 2017 Kiiara. (3)

Chris Kelly: Linkin Park working with Tranter and Michaels!? I can’t speak to the five (!) albums that followed Hybrid Theory, but I can’t imagine they relied on one of the biggest songwriting teams in pop during their regularly scheduled rap-metal programming. This is so generic that it will certainly be a hit, but in the end, it doesn’t even matter. (4)

Son Raw:  I love that Cas is utterly unrepentant in his scumbaggery: at a time when MCs use their real names and want to break down perceptions that they’re beacons of anti-social behavior, he just pisses on the whole concept here. This sounds like a great song to have a great time to. (8)

Claire Lobenfeld: I can’t wait until everyone else is just as bored by I Did A Lot of Drugs songs. Like seriously, I feel like Bricc Baby Shitro’s ‘6 Drugs’ was the final word. Until you can come up with something that is even more unhinged than that, why bother? (4)

Chris Kelly: Cas has been around a few years but hasn’t really caught my attention; only Doom can get away with the mask gimmick, and only a decade ago. On ‘Too Much Drugs’ the Chase & Status beat seems oddly outdated and Cas’s wordplay (“Man tryna step up, trust me the only steps is way too high”) is a bit corny for my taste. Maybe I’d believe him if the hook nodded to something other than skunk, bud and blunts. (5)

Tayyab Amin: The sheer confusion of my Nick Young face at the “Fuck me, this beat’s hard innit?” was a stark reminder of my sobriety and our meandering protagonist’s total lack thereof. This one sits somewhere between Danny Brown and The Streets (and thankfully nowhere near The D.O.T.). The hook is a little lost, but CASisDEAD’s delivery is perfect; words just dribble out as fast his thoughts form, and they’re just as stunted under the influence. Reminds me of all the times vague acquaintances have stepped up for a big late night chat right in the middle of the function, pacing anecdotes perfectly so that there’s never quite enough room to maneuver out of the ensnaring soliloquies. I can’t help but admire such tact. (6)

Chris Kelly: Rome Fortune has never shied away from rapping over non-traditional beats, whether by Toro y Moi or Four Tet. On ‘Jaded’, Florida upstart C.Z. toys with grime but leaves enough white space for Rome to unleash some wisdom with an apathethic attitude that lives up to the song’s title. (6)

Claire Lobenfeld: I’ve been soft on Rome Fortune for a long time, although I still hold a bright-burning candle for the Beautiful Pimp days and think ‘FriendsMaybe’ still goes. This stuff I can’t abide by. It’s so disappointing when someone with a singular, innovative vision rests on sounding just like everyone else. (2)

Tayyab Amin:  I could listen to this viscous liquid flow all night and I’m low-key worried I just might. Matched with a steady roller of a beat, it ticks away the bars like rapping’s the most casual thing in the world. Rome Fortune makes slickness look so easy that you don’t realise how much of a bumbling buffoon you are until he shows up. “Zack Morris” indeed. (8)

Son Raw:  I wanted this one to win if only because American MCs over grime sounds should be a thing, but this sort of feels like a worst of both worlds – eski synths we’ve heard before dragged down by identikit 808s. Even the usually reliable Rome Fortune sounds like he’s lukewarm on this one. (5)

Tayyab Amin:  Mr. Mitch’s social media presence is as transient as it is touching; he occasionally posts about fatherhood and it properly makes me melt. It puts his music under a different light too – I can almost imagine it being played to children as they go to sleep. This one feels like something you’d pass on to your kids once they’ve become adults and are approaching parenthood themselves. P’s vocal speaks to an effort to remain rock solid and unmoving in an environment of constant flux, and it’s thoroughly effective if you’re looking to find yourself in your feelings. (8)

Claire Lobenfeld: Devout is one of my most anticipated albums of 2017 and ‘Priority’ just ups the ante. Even if this track isn’t the most *flame emoji* thing to come out of the Boxed family, it is an indication of innovation. That is something always worth celebrating. (7)

Son Raw: In which P Money repays Mitch for the strongest beat on his Rinse album and delivers his best vocal since ‘Numb’ in the process. P’s commanding voice is unimpeachable at raves but it’s occasionally typecasted him as a lyrical steamroller, and this type of low-key self-reflection makes for more interesting at-home listening. Weaving in and out of Mitch’s sparse bleep and bass, this is a unicorn: an uplifting and serious song about responsibility and fatherhood that bangs hard. (10)

Chris Kelly: After making his name with “instrumental grime,” Mr. Mitch’s Devout is heavy with vocalists. Regardless, his style hasn’t changed: ‘Priority’ balances delicate ambience, ping-pong synths and a faint suggestion of a beat, while grime veteran P Money brings Mitch’s story of fatherhood to life with true-to-life detail. (7)