It’s Good To Be Differ-Ent: DJ Bone is carrying Detroit into the future

DJ Bone is one of Detroit’s undersung heroes, and after two decades in the game he’s still rising, about to release one of the finest dance long-players of the year on UK label Don’t Be Afraid. The man also known as Differ-Ent tells Ben Murphy about getting weird in the studio, what Jeff Mills taught him, and why dumb celebrity DJ culture just motivates him to get better.

Conforming has never been part of DJ Bone’s game plan. The man born Eric Dulan ranks among Detroit’s most original DJs and producers, a reputation he’s earned by reprogramming the techno mainframe. Instead of hitting cruise control and using the sounds and templates associated with the Motor City’s musical history – panoramic ambient chords, electro-funk bass, flanged percussion – Bone has embraced outside influences. Inspired by forward-thinking Detroit artists like Jeff Mills, Robert Hood and Drexciya, Dulan may not have hit their level of success yet, but that’s perhaps a consequence of his avowedly independent attitude; he’s run the respected Subject Detroit and Encounter labels for many years now while refusing to engage with the corporate machine. Still at the vanguard, his latest futuristic project appears under the name Differ-Ent.

As an outlet for Dulan’s experimental side, Differ-Ent has found him exploring harsher, stranger terrain. Where his classic tracks for Subject Detroit and other labels like Metroplex and Molecular are focused strictly on the dancefloor, his Differ-Ent material is abstract, angry, sometimes deeply melancholy. One of his first releases under the moniker was ‘M.O.M’, which appeared on UK label Don’t Be Afraid in 2015; the first half is furious, full of astringent, scraping technoise, while the second is reflective and beautiful as ambient pads flood the pummelling beats. Made in a raw period of grief after his mother’s death, it was one of several tracks that Dulan had put to one side, thinking them unsuitable for release as DJ Bone.

“‘M.O.M.’ was really angry and then it morphed into something a little more cinematic,” Dulan says. “My wife convinced me to put it out. I said, ‘I can’t really put that out as DJ Bone.’ Instead he came up with Differ-Ent, an alias he has previously described as “the other side of Bone’s Gemini being”.

The making of ‘M.O.M.’ was a cathartic release for Dulan, and he began to apply the Differ-Ent name to other tunes that didn’t quite fit with the Bone sound. “They came out kind of cold and very dramatic. That’s when I started putting all those tracks in a different folder. It just grew and grew. It’s like a whole different way for me to express myself, in the way I see things.”

Another release for Don’t Be Afraid, 2015’s Differ-Ent EP, yielded the moody, aquatic chords and subtle effects of ‘Differ-Ent(Ity)’, and cemented a working relationship with the UK label, which DJ and producer Semtek operates with a similar disregard for the mainstream. Joining DBA has also helped introduce Dulan to a UK audience previously unaware of his material, and in turn he’s got more bookings and found a fanbase for his more experimental material. Eventually Semtek asked for a whole album of Differ-Ent material.

“I had been getting offers, being asked by the bigger techno labels, and I kept saying no,” says Dulan. “It goes against the way I like to be. I like the fact DBA wanted the weirdest music possible from me. They like obscure shit and that’s really cool. So I decided to do it and they gave me free reign.”

The resulting album, It’s Good to Be Differ-Ent departs from what some will expect from a Detroit techno voyager: ‘Met Allergic Flew Antsy’ is a strobe-lit, tunnelling track with a distinct European sound; ‘Fasten 8 Shun’ is an astral sliver of trance-inducing synths. They’re just two examples on an album that resists the 313 archetype, mixing parts of Detroit’s musical heritage with frozen atmospheres and bursts of industrial noise.

“I decided that I didn’t want to make a historical Detroit sound. I wanted to do my upgrade to it,” he explains. “It’s like putting a new engine in an old car — it’s gonna run different on the track, so the only ones who’ll notice are the ones you’re racing.” 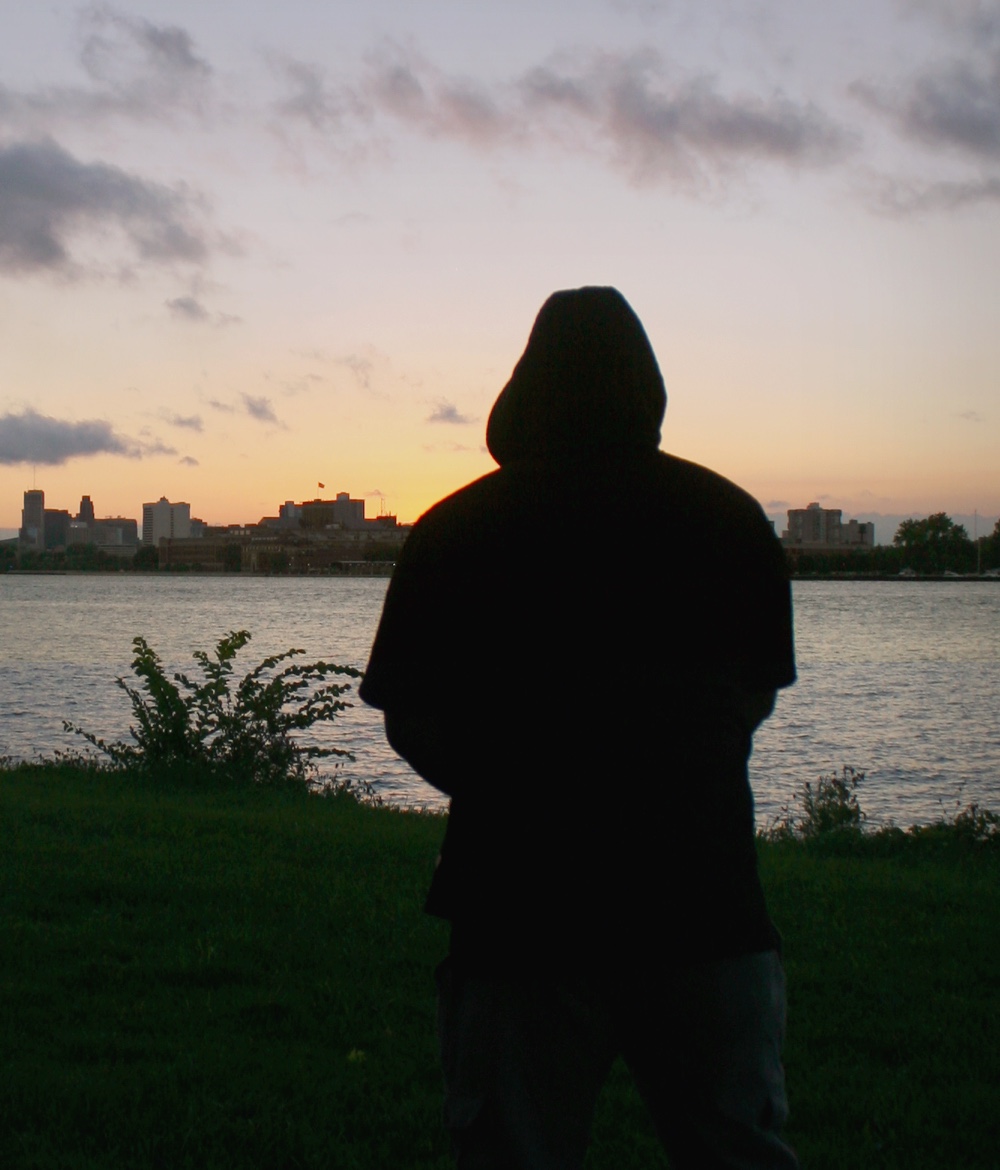 “I used to feel that I had to carry the Detroit name. Now I feel like I need to advance the name”

In his youth in ‘90s Detroit, Dulan would visit the Music Institute club set up by Chez Damier, Alton Miller and George Baker. A fixture of the city’s house and techno scene, the club opened his mind to the possibilities of electronic music. “They’d sneak me in the back ’cause I was too young,” he remembers. “There was one strobe light, no alcohol served, it was after hours, and I heard some of the best frequencies I ever heard. Early Derrick May and D-Wynn. That influenced me.”

His formative clubbing experiences informed his future path as a DJ. “Jeff Mills as The Wizard on the radio, that showed me that a DJ was more than just playing one record after the next. When a DJ just blends one record to the next, we used to call that ‘human jukebox’, a record player. But as a DJ, the possibilities, what Derrick was doing, what Jeff was doing, that was it. We were like, ‘Okay, that’s what can happen’.”

In 1997 Dulan became a resident at the Motor Lounge club in Hamtramck on the edge of Detroit, where he earned a reputation for his razor-sharp DJ skills and picked up a dedicated following. On that foundation he launched his prolific run of productions, including the killer 2007 album Out of Knowhere alongside many more singles and EPs on his own Subject Detroit label.

But if once he felt a weight of expectation resting on his shoulders, now he’s content to be Differ-Ent. “I don’t feel the pressure any more,” he shrugs. “I used to feel that — that I had to carry the Detroit name. Now I feel like I need to advance the name because there aren’t enough people doing that from Detroit. You got Jeff Mills and Octave One, who are very consistent, Omar-S does a great deal as well, but there used to be dozens of people. Every person you could name from Detroit would have a release every week or every other week. What happened?”

It’s Good to Be Differ-Ent also celebrates Detroit’s electro legacy, something he’s touched upon before on tracks like ‘Music’ and ‘The Funk’, but this time steering into stranger dimensions. “I wanted to do some electro stuff that wasn’t typical Detroit electro-funk or Aux 88, because otherwise I couldn’t convey the cinematic aspect of it. I wanted more structure in the sounds, more of a high, mid sound too, as opposed to just bass.”

The results can be heard on ‘Compute Her’, a clipped groove of cascading blips and beats, while the fluxing rhythms and tense keys of ‘Motive Hate Shun’ are closer in spirit to Detroit’s most visionary crew, Drexciya. Gerald Donald and the late James Stinson conjured worlds and mythologies with their electro experiments – a definite muse for Differ-Ent – but their influence on Dulan goes further.

“It wasn’t just the music, it was the mindset of one of the main guys, James Stinson,” Dulan explains. “He surprised me because when I was a resident DJ at Motor in Detroit there were a couple of times where, when I had never met him before in person but knew his music, I would play the stuff, and we had a live radio broadcast, midnight to two, with no commercial breaks. I guess one night I was playing some Drexciya and he heard it, so he came down to the club. He introduced himself and said, ‘My name is James, I appreciate that you’re playing Detroit shit on the radio’. And he broke out. He came back a couple more times. After the second time I realised who he was. Then I’d see him around the city and it was a whole different vibe. I liked the way he wasn’t running around with a Drexciya T-shirt and saying his last name to everyone he met, with a UR headband on. It was really dope. It made it completely about the music.”

As for today’s dance music industry, Dulan sees it as a celebrity culture based around DJ worship and conservatism, running counter to everything he believes in.

“I think it has a lot to do with the personalities,” he says. “You have the most basic beat possible playing, and DJs put their hands up and start dancing like they just cured cancer or something. I’m like, ‘Okay! You mixed two songs, congratulations!’ They stand there and celebrate for the next four minutes. Is that what it’s become? Not everybody has to be that way, not everybody has to be the same. That is ridiculous to me. It’s so Trumpian. There’s no passion, it’s just basically idolatry. Celebrity, and people are paying for that. Look at me, adore me for being here and blessing you with my presence. Now let me collect my thousands of euros and my USB stick and run out the back door with this bottle of expensive champagne. It’s just weird.

“But it has to happen that way. I don’t want it to go away. If there’s nothing I don’t like then I won’t be motivated to be a better me. It will make me complacent or cocky. It’s like a superhero without a villain – what are they gonna do all day? Sit around in tights, drinking tea?”

Differ-Ent remains his studio focus for now, but he continues to DJ around the world as DJ Bone and has two new radio shows in the works for Rinse FM and Amsterdam’s Red Light Radio. In Amsterdam – his European base when not in Detroit – he’s also got a new residency at The Shelter, where he’ll play six times a year; this past Friday he played alongside Octave One. “It’s more in the Detroit style than the bang, bang or festival type atmosphere,” he notes.

He’s applying his restless creativity to several other projects at once, with more DJ Bone material to come, a club tools offshoot called Cheat Codes, and an ambient project, Without a Sound. “When everybody’s going left, I look and say, ‘let me go right’, ‘cause I’m not trying to be like everybody else,” he says. “As long as it doesn’t lead you to danger, even if they say that road is five times longer – to me that makes it five times more interesting. I’ve always had a hard time. As a black man in America you always have to be twice as good anyway, so why stop? Why not use it to my advantage?”

Read next: Jackmaster on going back to his techno roots and why he’s over being a party animal