Making the banned: MK The Plug and M1 On The Beat are UK drill’s brightest hope

Making the banned: MK The Plug and M1 On The Beat are UK drill’s brightest hope

Making The Banned
Back to FACT

MK The Plug and M1 On The Beat are two of the most in-demand UK drill producers. But as the genre continues to garner more attention, it’s also attracted an opposition from conservatives and law enforcement who are censoring the music, regardless of who’s making it. Can UK drill survive 2018?

M1 On the Beat wants to know if I’d like some juice. Even though he and production partner MK The Plug have become two of the most in-demand drill producers, their sense of community hasn’t faltered. MK is sat stretched out on the sofa. “This room is where it’s all happened,” he says, chuckling.

The wallpaper is peeling, but not from neglect, it looks like someone has taken a hammer to the paintwork. These walls have been in a state since M1’s neighbors called the authorities on him, believing he was running a drug den. As a result, he was ordered to take down the soundproofing protecting his neighbors from the ephemera of late-night production sessions.

“You’re in The Niz now, bro!” M1 calls from the kitchen, referring to the nearby Broadwater Farm, Tottenham’s most infamous housing estate. It is where drill crew OFB and it’s frontman Headie One reside, as seen in the latter’s video for ‘Live In The T’. It is also where Mark Duggan grew up: the 29-year-old shot dead by police in August 2011, sparking riots across England’s major cities.

In the last year, M1 and his creative cohort, MK The Plug, have been busy rewiring the aesthetic character of UK drill with their piercing, melancholic production. The genre has now evolved from an ignored underground subculture to a central fascination for both rap fans and the genre’s stringent adversaries. Earlier this spring, despite its existing popularity and unparalleled presence on social media, drill garnered new, authoritarian attention after the front-page of The Times slammed DJ Tim Westwood for promoting the music on his YouTube channel. Other publications followed suit. Drill now faces the pressure of the British courts as attempts to censor its artists from making the music take shape. 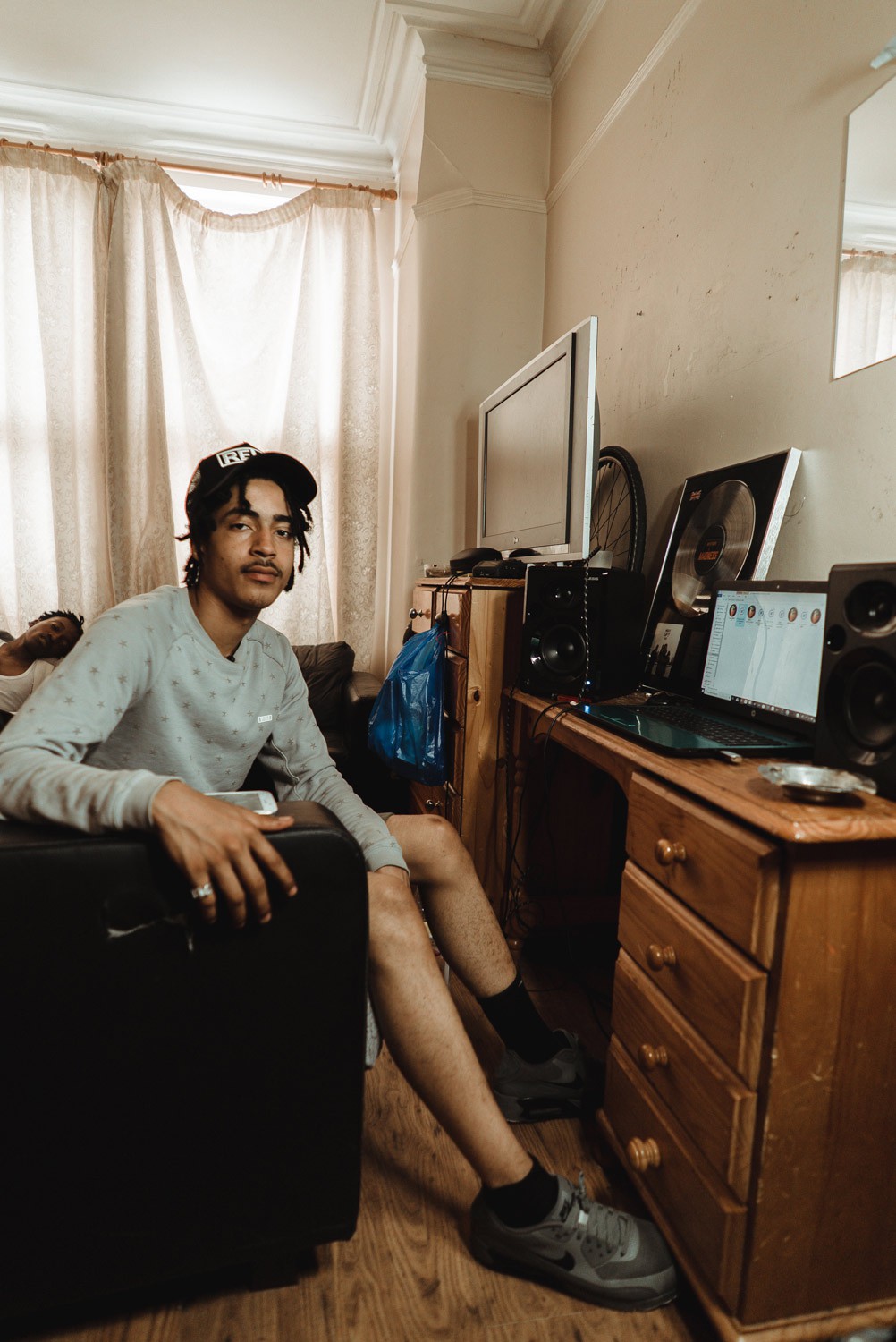 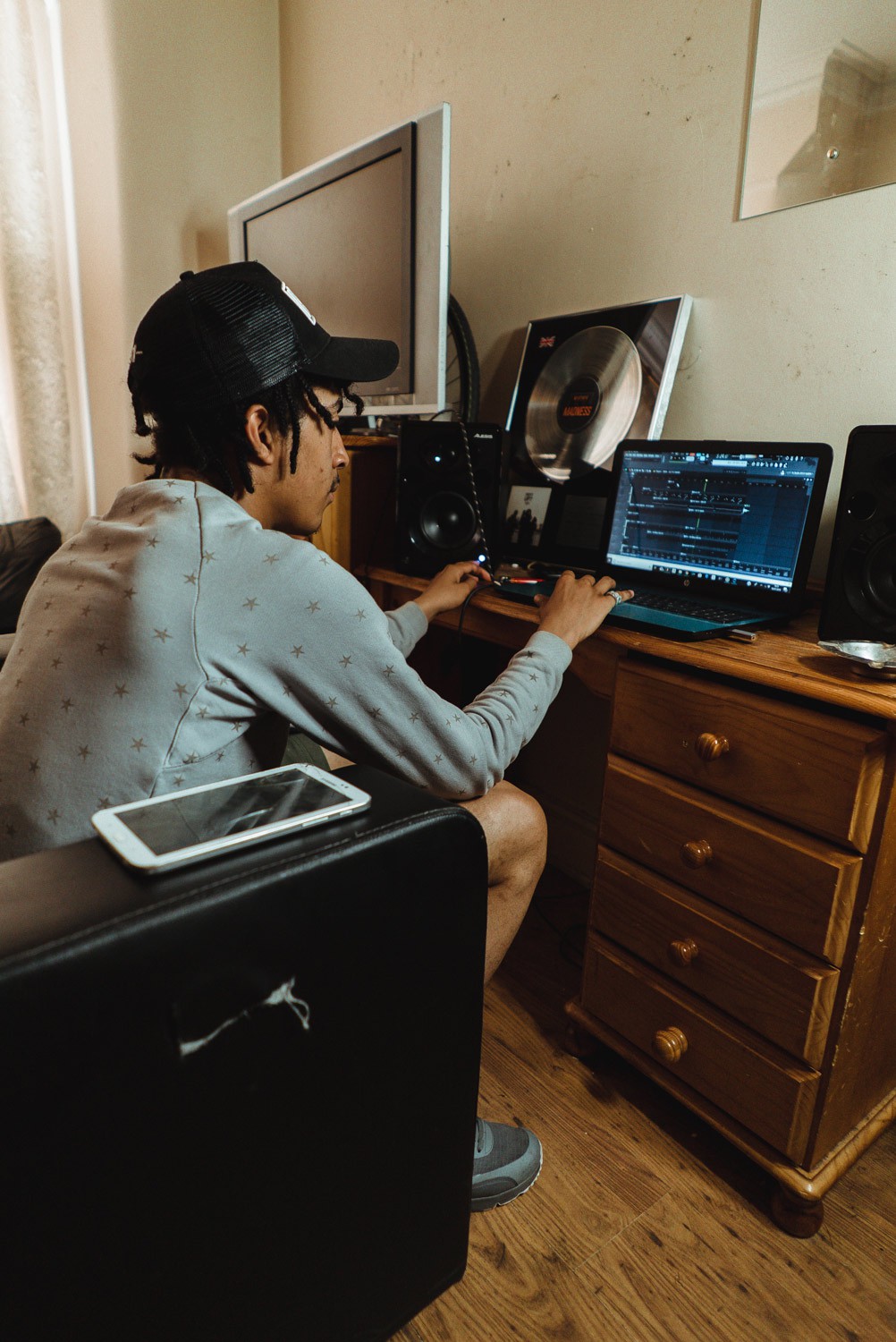 Last year I reported on the drill scene in the UK and interviewed the genre’s founding godfather, Carns Hill, in a pub on Brixton Hill. Hill continues to be one of the most influential producers in the city whilst working with the scene’s leading artists like 67, K-Trap and Zone 2, all of whom have released bodies of work with his help this summer (‘The 6’, ‘The Re-Up’ and the entirety of ‘Hillside Zoo’, respectively). But a lot has changed in a year.

As a youth-worker in London, I’ve heard drill music’s bass vibrate across a prison wing to bangs and shouts of approval from young prisoners’ cells. I’ve sat for hours speaking to people about the music’s social world - the rivalries, tunes-of-the-week and shifting dominance of artists - while watching its videos on a suspended television screen at Marcus Lipton Community Centre in Brixton. I’ve delivered weekly workshops to boys at risk of exclusion from secondary school, using drill’s ethical complexity to spark debates amongst participants. 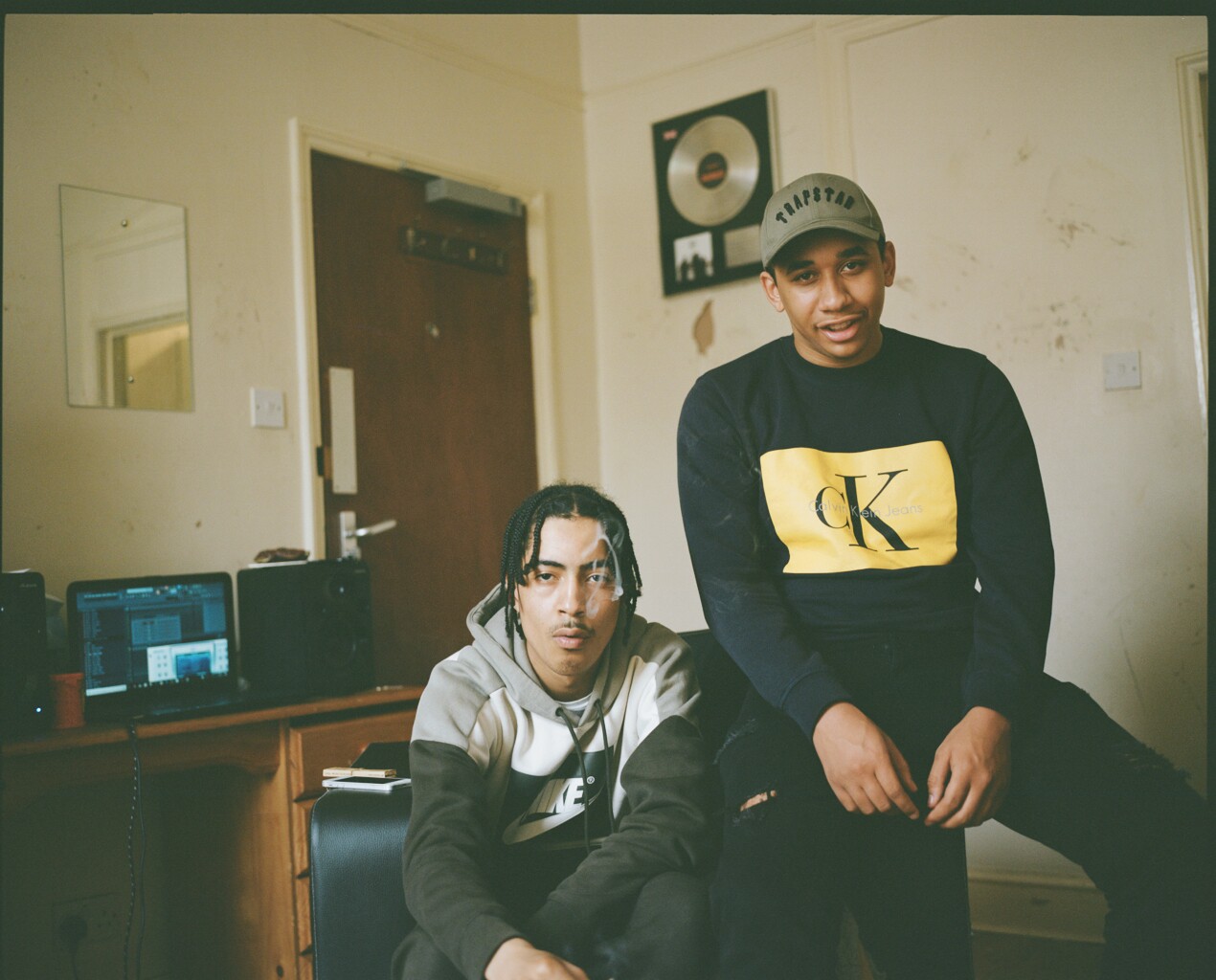 Earlier this year, I sat at an oak round-table in Parliament and gave evidence to MPs and academics about drill’s intertwinement with social media usage amongst teenagers. A few weeks after that, I argued over the phone with a BBC television producer about the channel’s imbalanced reporting on the genre, and on the same day debated why rappers should not be investigated as if they are terrorists on national radio.

Dan Hancox argues in his new book Inner City Pressure that grime was borne out of socioeconomic and racial inequality, hyper-surveillance and urban regeneration projects in East London under the New Labour government around the millennium. Grime has vitally always had a cooperative infrastructure and community where its early days could be nurtured on pirate radio in abandoned council flats and in youth clubs. Drill relies on social media, not radio, as the predominant, instant and easily untraceable contemporary broadcasting device. Continued gentrification across London in regions of historic poverty and neglect, and the existence of fewer publicly funded youth spaces available for teenagers to spend their time are now the forces steering peripheral musical creation in London. Drill is this generation’s furious response against the Conservative government’s decimation of state support for the most vulnerable communities under austerity. This year in the UK, the world’s fifth largest economy, families with children are most likely to rely on food banks, early-years funding cuts are pushing more children into care, and target-obsessed academy schools are excluding more teenagers than ever, leading to increased violent crime.

If Brixton sets the scene for the first chapter of UK drill’s story, Tottenham starts the second. The sound has spread throughout the concrete nooks of London, finding resonance wherever there are tightly-bound groups of teenagers. A lot of this has to do with Tottenham MCs Abra Cadabra and Headie One, whose new mixtape The One Two is a genuine masterpiece, set to mark a milestone in drill’s evolution by fusing the genre’s rugged, bassy edge with the lighter, melodic, sung quality of UK afrobeats (see its trailer or recent single ‘This Week’ with Yxng Bane). Symbolising his authority as the undeniable scene leader, Headie One was subsequently chosen by Mixtape Madness gatekeeper, Mad About Barz host and self-proclaimed “voice of the streets” Kenny Allstar, for the catchy lead single, ‘Tracksuit Love’ off his upcoming compilation project Block Diaries. But behind the scenes, the genre’s all-city cross-pollination is also the result of M1 and MK’s innovative beat-making. At only 19-years old, the pair have helped redefine underground rap music. They are now household names for teenage drill fanatics.

“They were the rallying point for the rest of their year,” says Sam Conley, a tutor at Soundskool, a music college M1 an MK attended in North London that has recently had its funding cut. “The [UK] drill sound hadn’t even developed back in 2015, but they were onto something. The people who come through the college now are proud to be there because of those two. Young people in the same situations, who maybe struggle to engage in mainstream education. Everyone tries to mimic what they’ve done. They’re heroes.” 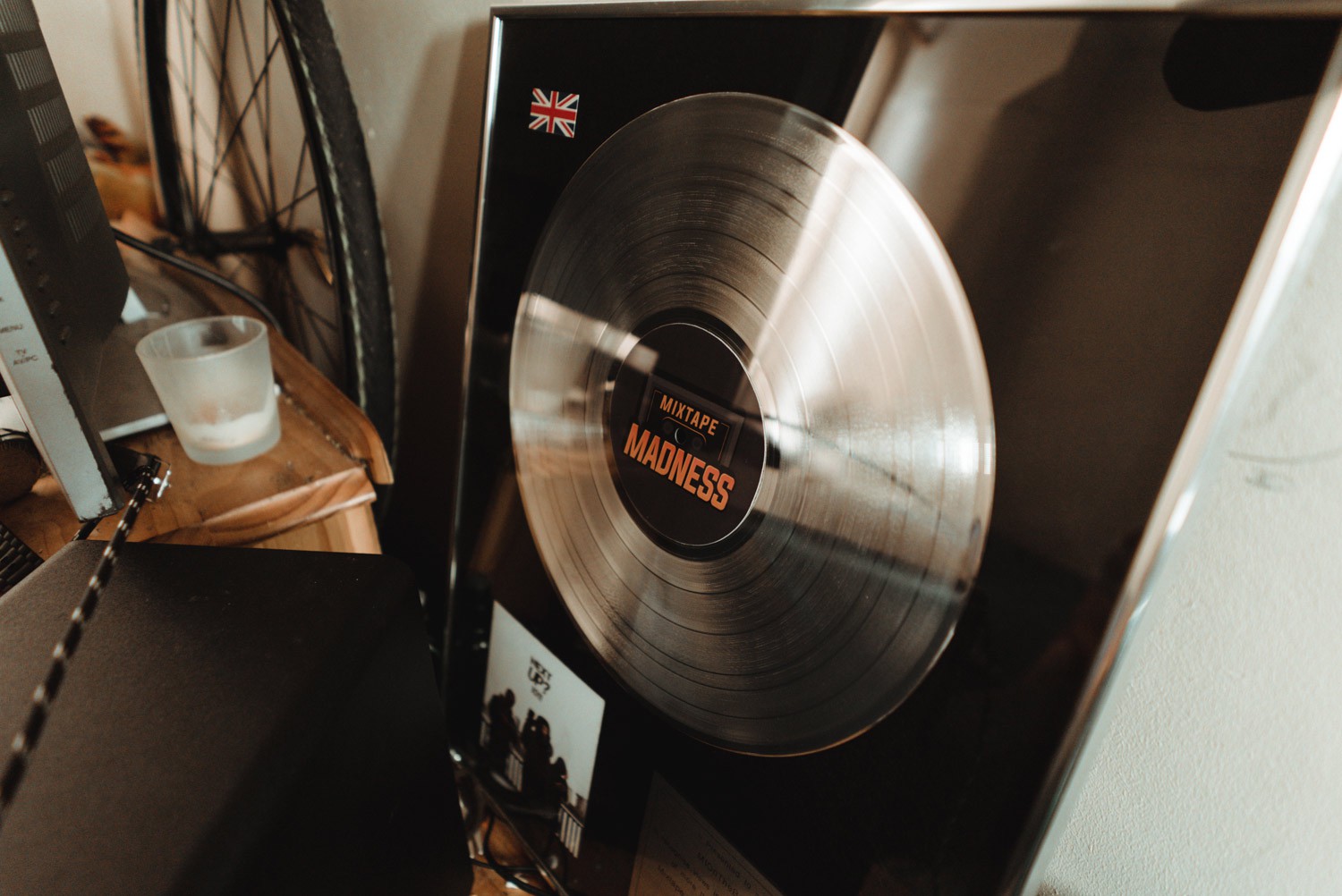 Their alchemy comes from late nights spent at M1’s flat, peering over an old laptop and some battered speakers

When they started making beats together, MK had just been kicked out of school and M1 left his family home. They honed their craft at the YMCA hostel that M1 subsequently moved into. “I wasn’t doing anything with myself at that time, I was just thinking about how I could make money and do something good with my life,” he says. “When you grow up on a council estate, all you know is what your friends are on. Especially when you’re 13 or 14. You know when people say you are who your friends are? It’s true.”

Between them, M1 and MK have produced a diverse spread of acclaimed drill anthems. M1 is responsible for Headie One’s ‘Broni’, Kennington man-of-the-moment Loski’s ‘Intro’, ‘Money & Beef’, ‘Mummy’s Kitchen’, and teenage Harlesden artist Q2T’s ‘Trust No One’ whose video features a cameo from road-rap king Nines. MK, who is from Hackney, in the north-east of the city, has made beats for 67 upstarts R6 and ST’s ‘Joggin is Healthy’, Harlem Spartans’ ‘Bands’ and Clapham Junction-based, muscled provocateur Burner’s ‘Madder Than Mad’.

It’s when the pair are producing together, on tracks like Loski’s ‘Fire In The Booth’, or Headie One’s ‘Golden Boot’, where their work stands out the most. Their alchemy comes from late nights spent at M1’s flat, peering over an old laptop and some battered speakers, firing off their beats to rappers across the city, usually without even meeting them. Their sped-up formula, with its jagged, sliding bass, is distinct from that of other producers. “I taught myself the piano after seeing my sister play when I was eight,” M1 says. “Now I see every part of an instrumental like a melody, even the 808s.” MK used to play the drums. “The main thing for me is the bass, that it all sounds good in your headphones or in your car,” he says. In a broader sense, M1 and MK’s prominence has helped carve-out drill’s own domestic sound in the UK, taking it further and further away from its Chicago roots. This iteration of UK drill music is more energetic and impatient than it was even two years ago, reflecting the fearlessness of its growing pool of young creators. Sometimes, it’s bouncy enough to dance to, like Q2T’s ‘Andy Murray’, Headie One and RV’s ‘Know Better’ or Loski’s ‘Teddy Bruckshot’. 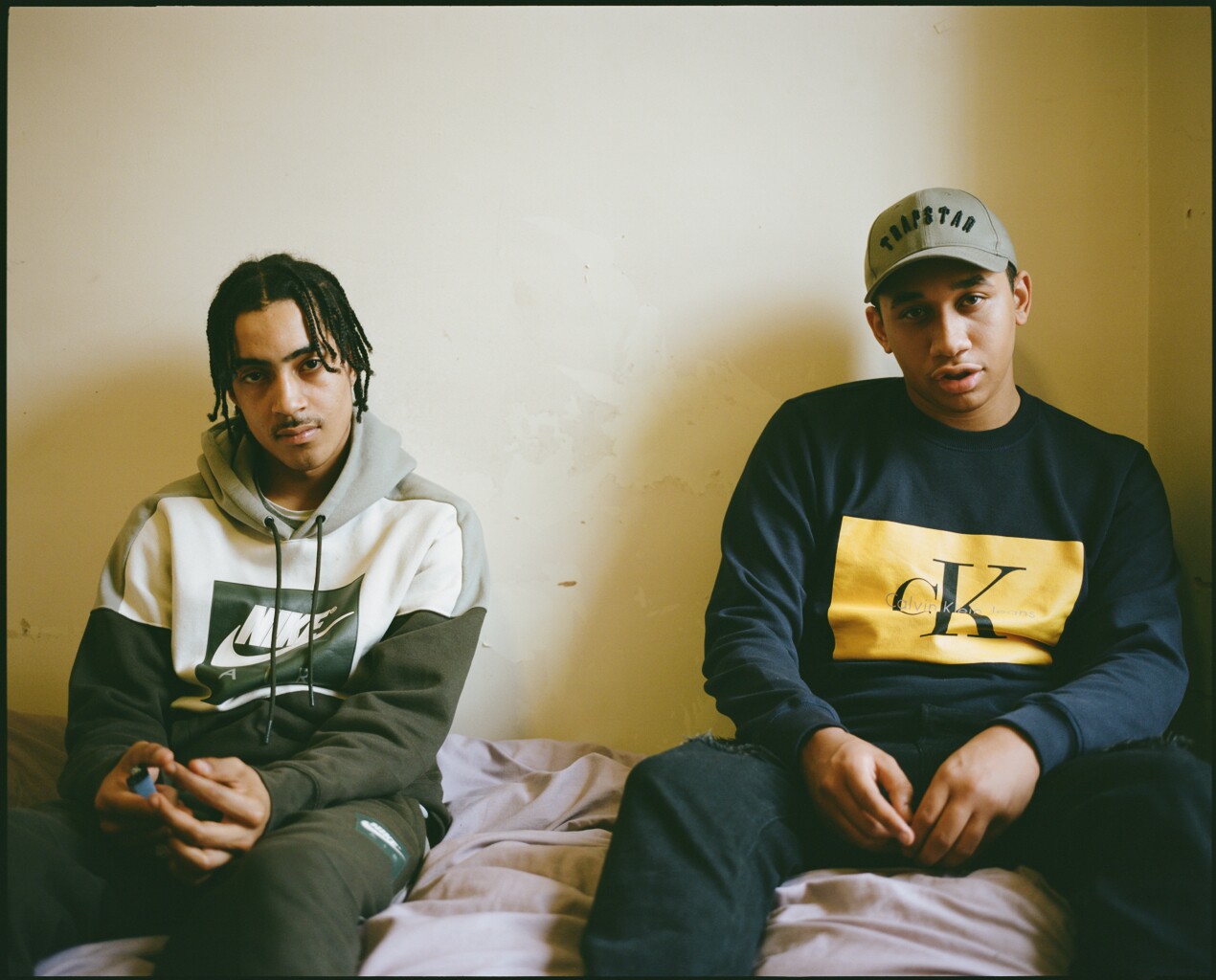 “It’s like grime mixed with the American drill sound, and we’ve added in the snares and sub-bass from UK garage, too” MK says. “I remember when Chief Keef came out, me and my bredrins at school would all try and copy his beats,” he says, stressing that Chicago’s pioneering drill sound was far more influential than grime in his formative years.

UK drill’s success as a hyper-detailed account of trauma and violence, however, could also be its potential downfall. Politicians and police in power, who seem unwilling to engage with social problems at any significant level, have been eager to blame drill for the continued spike in knife-crime across the capital. At the beginning of June, due to mounting pressure on the police and social media companies to do something about drill’s alleged role as the primary inciter of violence, YouTube removed over 30 drill videos, three of which M1 and MK produced. They also happen to be three of the most known tracks: West London crew 1011’s ‘Next Up?’ and ‘Play for the Pagans’, and CB’s ‘Take That Risk’.  YouTube video views are the main currency of success for any drill output. “Those videos had 11 million, 5 million and 2 million views,” M1 says. “That’s 18 million views I don’t have any more. It hurts. Me and MK, we’re not doing what them man are doing. There are innocent people behind the production of these videos.” 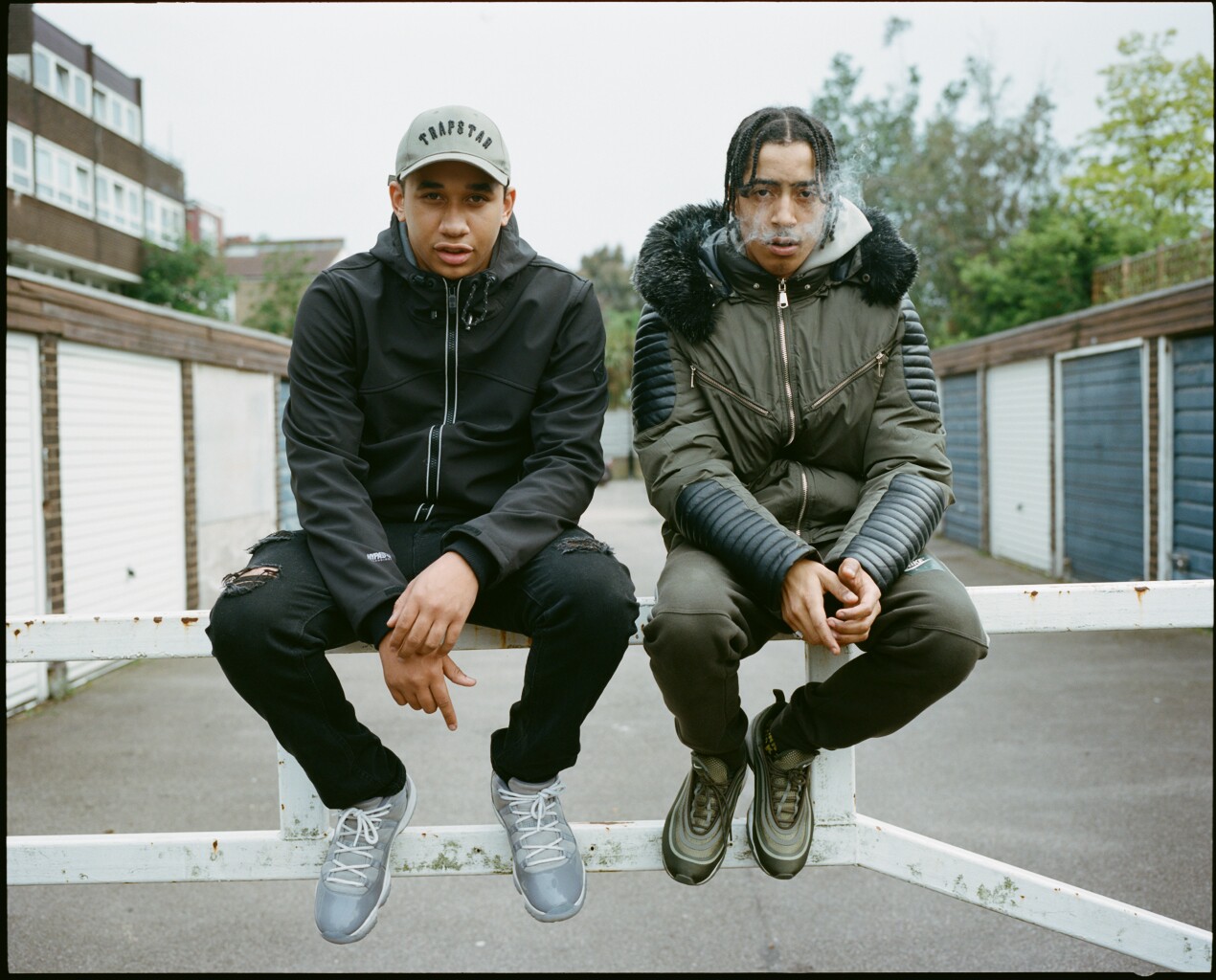 Music’s taught us so many lessons, Patience is the first thing.

MK notes that people are already starting to self-censor and push away from the genre. “I was in the studio the other day, my guy started spitting over one of my beats and it was calm. But then he stopped halfway and said he kept thinking about how they’re taking down drill videos,” he says. “Some things I can understand banning, like mocking dead people in lyrics, but mostly this is about people’s freedom of expression. Most guys are just talking about their lives.” After being fatally stabbed last April, the family of late rapper T-Wiz, né Abdullahi Tarabi, campaigned to have a 1011 video that featured lyrics mocking Tarabi’s death removed from YouTube. It harkens back to a 2012 news story about Chief Keef laughing on social media about the death of his “opp”, a Chicago-originated slang word for enemy, rapper Lil JoJo. In MK’s opinion, however, music is an outlet that can prevent this kind of foul play: “There needs to be things for young people to do or they’re going to get bored and start doing some next shit.”

“We were running a nice studio here, charging people for it, a proper business,” M1 says. After a brief moment of sad reflection, he shrugs his shoulders, sits up and smiles, determined to stay upbeat and positive, demonstrating the same humble resilience and hopeful maturity that bleeds through his music.

“Music’s taught us so many lessons,” MK adds. “Patience is the first thing. Like, we were giving our beats out for free, sending them out to everyone. Then we started charging. That’s another thing: it’s taught me about business, contracts, all that shit,” he says. “I guess drill saved us.”