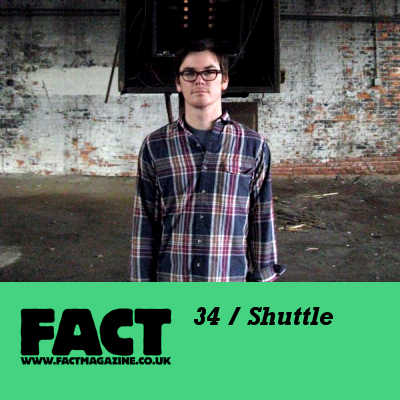 The 34th exclusive FACT mix comes from someone who’s already put out one of the year’s best mixtapes, Massachusetts’ Shuttle (formally Etan).

The Vostok Mixtape is still available to download from Shuttle’s blog, and we suggest that you get that once you’re down with this mix, as it’s very good. Shuttle first hit our radar with last year’s remix of The Death Set’s ‘Around the World’ – that was when he was called Etan, before sharing a name with two rappers prompted him to switch.

He’s got a single, ‘Tunnel’/‘Rotten Guts‘, out on Ninja Tune, and his FACT mix features more of his own material, plus tracks from Groove Chronicles, Zomby, Shackleton, Missy Elliot and more. There’ll be a Q&A with Shuttle accompanying the mix – watch out for that bad boy later in the week.

08 Shackleton – You Bring Me Down (Peverelist Remix)