Broadcast and The Focus Group: 'â€¦Investigate Witch Cults Of The Radio Age' 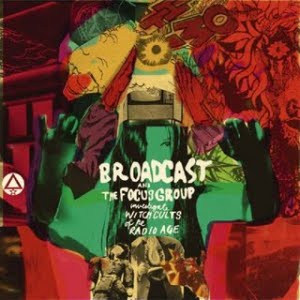 Rating: 7 / Format: CD/Digital / Label: Warp  Here’s a collaboration made in hipster Summerland. Broadcast, perennial sporters of Quantian hair fashions and purveyors of musical Pagan perversity (by way of Birmingham) hook up with The Focus Group a.k.a. Julian House, he of exquisitely packaged Ghost Box label infamy. The aesthetics and references are achingly cool – British folk, library music, BBC Radiophonic Workshop, UFO Club psychedelia, John Surman, Hammer Horror/Tigon et al. It’s no bad thing of course because these influences are at the very heart of what both artists are about – a non-sepia-tinged sense of nostalgia, a subversion of what ‘tradition’ means in pop culture, a quest for neo-cosmic enlightenment. It’s the undoubted common ground between both artists that renders Witch Cults… such a fruitful communion. Broadcast’s Trish Keenan does her best Anne Briggs impersonation on some of the EP’s stand out moments, her voice couched in the kind of sonic environs that can probably be best described as ‘far out’: the way opener, ‘Magnetic Tales’, with its Wicker Man melody, segues into the wayward acid-pop of ‘Be Colony’ – "all circles vanish" being the song’s magick incantation – is utterly sublime. Across the entire EP the movements in music tend to mulch together but in a pleasingly disconcerting way. As such, these are mildly mind-altering soundscapes to bathe in and let wash over you as relentless slabs of melodious Mellotron, naive recorder flourishes, occasional monastic vocals and other kosmische aural tropes seep in and out of your cranium without ever taking root.  Two things disappoint ever so slightly. Firstly, this is terribly pleasant music. There’s nothing wrong with that, it’s just that the darkness hinted at in some passages is never fully elaborated upon. And they’re the most interesting bits. Secondly, the way such unashamedly retro music will doubtless be perceived by a great many people as ‘leftfield’ (see Broadcast in all their ‘ooh, we’re weird we are’ splendour in recent press shots) will always grate. Still, Witch Cults… is certainly a decently diverting listen and whets the appetite for Broadcast’s proper return next year wherein one hopes they’ve at last written another pop song as good as ‘Come On Let’s Go’.  Rich HanscombBroadcast myspace