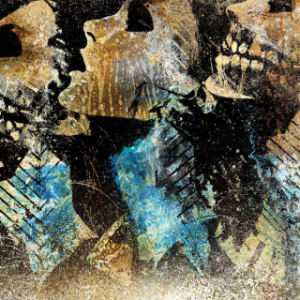 Massachusetts-based Converge offer a convincing case for best metal band of the decade. Consistently brutal, intense, intelligent and aesthetically astute, they effectively put a lid on the 90s noisecore subgenre with their epoch-defining Jane Doe, in 2001. Essentially a concept album about a relationship gone horribly wrong, it was followed up three years later by the bleak You Fail Me, itself a drained husk after the ‘Bitter and Then Some’ Jane Doe. The more straightforward (save for the exceptional centrepiece ‘Grim Heart / Black Rose’) No Heroes followed in 2006. Though less inspired, it was effective in consolidating the Converge legend.

Now, and not without expectation, comes Axe to Fall. The band’s status has been reflected in the guests on here: Steve Von Till from Neurosis; three quarters of Cave In; all of Genghis Tron, among others. Thankfully, the Converge identity is sufficiently strong to assimilate, rather than be defined by, these guests. You wouldn’t know Cave In play on ‘Effigy’ if someone didn’t tell you. Ditto former Entombed guitarist Uffe Cederlund on ‘Wishing Well’. The songs benefit, whether you notice the personnel or not.

In a reductive sense, it could be argued that Axe to Fall is Converge’s thrash album, after their noisecore (2001), hardcore (2004) and metalcore (2004) records. That would obviously sell their sounds short, but the increase in Kurt Ballou’s staccato riffing and Ben Koller’s new-found fondness for pasting the double bass drum like he’s Dave Lombardo or Gene Hoglan is rather noticeable. First song ‘Dark Horse’ explodes into action, roaring and flexing like Iron Maiden’s Lucozade ad song (‘Phantom of the Opera’, in case you didn’t know) re-written for the UFC era. Indeed, a good portion of the songs on here are brief, violent, attacks on the ears and mind: guitars and drums squalling, spinning and flying off in all directions. Jacob Bannon – sounding incrementally more human through the course of this decade – rants and howls throughout, of revenge, anxiety and dread: ‘I’ll do anything that I can do / To lock the window, beasts are climbing through’.

There is counterpoint to the rage and bluster. As with past records, these moments contextualise, as well as break up, the frenzy. ‘Damages’ chips and gnaws away at you, angle-grinding post-noise; a virtuoso Wolf Eyes, by way of Discharge’s ‘Protest and Survive’. Steve Von Till’s grizzled, veteran, Lanegan-esque tones bring melody and variety to the closing stages of album. Like a Neurosis song, ‘Cruel Bloom’ offers the extremes of calm and punishment. Though you know it will kick in with some force, the song does so in a way that maintains the sense of melody and space that makes the  track so delightfully ominous.

Concluding ‘Wretched World’ begins with the insistent clicking harmonic of a clock tick-tocking. Mookie Singerman, of New York techno-grindcore band Genghis Tron, sings on this one, and it continues the paradoxically bruising melancholy of that band’s last album, Board up the House. Singerman intones, with far more confidence than in the past, of ‘a broke life’s shattered art’; two bands holding fire for a beautiful finale that at once caps off another brilliant Converge record and whets the appetite for ‘Tron album number three. While the news that this album would feature a host of guests suggested a mess of sounds, and perhaps even career desperation after seemingly exhausting the avenues of hardcore/noisecore/metalcore, it has paid off. Certainly, on this last pair of songs, the guests bring their own sound and identity to the mix, while never detracting from the cohesion of the record. It’s a tribute to a band that keeps developing their sound while never appearing repetitive. In a world of lo-fi and shoegazers, this is rock music in HD.