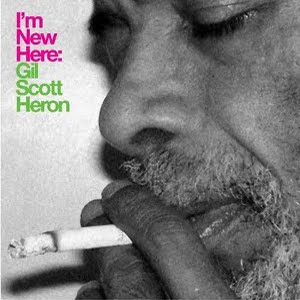 This brief transmission from the heart and mind of hugely influential rap progenitor, poet, musician and writer Gil Scott-Heron was first forged in 2006. Whilst incarcerated at Rikers Island penitentiary for cocaine possession, long-term admirer and XL boss Richard Russell approached him. Four years later, we have the first new material from Scott-Heron since 1994’s Spirits.

Try as you might, it’s hard to escape the similarities here with the work produced by Rick Rubin and Johnny Cash during the American Recordings sessions circa 94-02. Two untamed, troubled souls laid bare; sharing audio documents in mistakes and regrets, reflections and repentance. Spun deep into their collective fabric, a visceral recasting of songs past, bound into brave, unusual new shapes, abetted by a supportive cast of music industry players (the currently ubiquitous Damon Albarn appears here, as does Chris Cunningham).

Resonating throughout I’m New Here however, is the continuation of a far-reaching African American blues tradition that Scott-Heron himself helped shape during the 70s and 80s. Part of a staggering opening triptych, the heartfelt Kanye / Curtis Mayfield sampling ‘On Coming From A Broken Home’ triggers the fire, shortly followed by Gil standing at the crossroads, wailing through a lo-fi decimation of Robert Johnson’s ‘Me and The Devil’. Elsewhere pioneering soul-man Bobby Bland gets re-awakened on the despairing ‘I’ll Take Care of You’, whilst the pure New Orleans gospel blues jam of ‘New York Is Killing Me’ is infected by dirty, pumping sine wave bass and seasick vocal samples, transposing an eternal blues desire to escape the alienating Metropolis and return to rural pastures familiar; to “go back home to Jackson, Tennessee…”

It is this very collision of old and new that the majority of I’m New Here’s sonic matrix is built on; an industrial-electronic skeleton of archaic synthesizers, organs coated in tape static, minimal drum patterns throbbing and decaying in the background and jet black drones dredged in from the after-light.

Title track ‘I’m New Here’, the most organic song on the album, cuts through the introspective gloaming of the album with its acoustic simplicity to reveal a fascinating shimmer of brightness. The buttered baritone of old has gone, replaced by a perfect grizzled croon, leaving Gil to paint his way around Smog’s lilting redemption-song, with the key lyric “no matter how far wrong you gone… you can always turn around”. In this case unlike Johnny Cash’s acoustic revision of ‘Hurt’, ‘I’m New Here’ feels like no final word.

Some will be grumble at its length (28 minutes), others will feel short changed by the albeit brutally honest (“If you gotta pay for things you done wrong, then I gotta big bill coming!”) interludes, and some of Russell’s studio manipulations, perhaps, seem a little calculated. But, and it is a major but, I’m New Here remains a startling work, an honest, open dialogue between Gil Scott-Heron and himself to which all are invited, possibly lightning the touch paper for a bold new act in this man’s remarkable life. I’m New Here? Here’s hoping.