Dopplereffekt’s classic Gesamtkunstwerk back on vinyl

Originally released by International Deejay Gigolos in 1999, Gesamtkunstwerk compiled hard-to-find tracks from the four singles and EPs self-released by Dopplereffekt through their own Dataphysix Engineering imprint between ’95 and ’97.

The album was then licensed by Clone Records for a fresh vinyl and CD release (with tweaked artwork) via their Classic Cuts offshoot in 2007. This edition has been out of print for a while, but has now been re-pressed, and is available at regular price on both CD and 2×12″ LP.

The precise personnel of Dopplereffekt has always been ambiguous, but the project’s helmsman and one constant is Gerald Donald (pictured above with Michaela To-Nhan Bertel), who these days likes to be known as Heinrich Mueller. As well as being involved in James Stinson’s Drexciya, the Detroit-hailing Mueller has released solo and collaborative records under a range of aliases, including Der Zyklus, Arpanet, Elecktroids and Glass Domain.

For the past few years Dopplereffekt has been Mueller’s main creative outlet, with the excellent Calabai Yau Space (Rephlex, 2007) the most recent album release. He has also had a hand in Victoria Lukas’s Zerkalo and recently remixed ‘Zig-Zag’ for Rustie‘s Bad Science EP.

Though grown out of the same Detroit electro DNA as Drexciya, the Europhile Dopplereffekt has a colder, harsher and more obviously synthetic sound, largely indebted to Kraftwerk and the minimal wave boom of the 1980s. Gesamtkunstwerk is aesthetically preoccupied with systems of control, from totalitarian government and technology to pornography and selective breeding – as the cover art and track titles like ‘Cellular Phone’ (an eternal dancefloor killer), ‘Ponoactress’ and ‘Sterilization’ make abundantly clear. Musically and conceptually the LP was a key influence on the electroclash movement, and has had a lasting impact on electronic music production in general.

“Gesamtkunstwerk is almost as important for a complete techno generation as Kraftwerk’ s Computerworld and Autobahn were for many in the 70s,” reckon Clone. And they’re right. 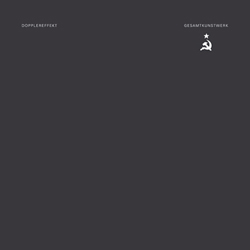