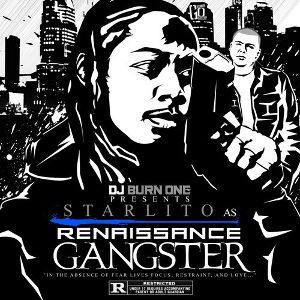 DJ Burn One and Starlito’s latest effort, Renaissance Gangster hovers somewhere between the territories of special mixtape and short album. But however short it might be in length, it’s more than compensated for by its quality. Both Burn One and Star are fast becoming known in the South for their endurance in pursuing good things, and we should feel blessed that the two have got together and squeeze out some magic. The result is a cohesive statement floating in a sea of thrown together, variety show style tapes sinking quickly to its murky bottom. Rap needs more thoughtful work like this. And the formula is simple: one MC, and one producer.

The tape starts off with a title track that bangs like a James Bond theme; Burn igniting intrigue with a reverb-soaked vocal sample propelled by a hearty TR-909. As the beat guides the listener through a flooded landscape, Star becomes your hollow-toned guide, slipping between incidental psychedelia and straight gangster shit, assuring you that wherever this tape takes you, you’re in good hands – everything here is precision orchestrated and financed by creativity, rather than a budget to spend on a dozen hot producers. Proof is in the next track, the impeccable ‘Alright’.

‘What Was I Thinkin’ nods to Wu Tang, with Burn One jamming a short blues loop with ride cymbals in the classic RZA style, and Star breaking into multi-layered chat at every turn (“Look at me I done recaptured my buzz / ‘Cause for a minute there I wasn’t half the rapper I was”). Of course written words can’t do ‘Lito a lick of justice, it’s all in the tilt of his drawl and the grace of his lean.

‘Weed Smoker Music’ is exactly what it says it is, and as far as weed smoker music goes right now there’s no finer; gangster tendencies without any paranoia inducing violence. Burn One blows smoke into his gear, pinning down cream tone guitar waves with his signature bounce. ‘Loud Deficit’ follows, and blasts us out of the fog with a noise laden organ intro. The 808s drop and nuggets fall from the sky, filling up Star’s emptied bag. He may not “have a clue what the fuck is going on”, but somehow takes us to an undesignated point B.

On its seventh track, Renaissance Gangster turns an emotional corner. ‘Tired of Being Tired’ is a melancholy ode to incarcerated homies. It’s a theme covered by many artists and usually ends up being the track you always skip, but Burn and Star bring you right into the discord – Burn engaging us with angelic samples and crystal drums and Star employing his sideways delivery to make you feel a loss that you might have never had.

‘Happy to Be Here’ takes more hip-hop stables and reroutes them, as the obligatory “happy to be alive” track is made into something wholesome and viable; Burn building a glowing, synth-washed beat around Starlito’s close up verses. Pill championed track ‘Coastin’, which appeared on Pill’s recent Refill mixtape, follows, and sounds as great as ever, even with this slight facelift.

Bringing Renaissance Gangster to an end is the gangster noir of ‘GH’ (Grind Hard, dummy). Star gets rowdy on an understated instrumental, which bounces along by means of an open hat drum loop balanced out with siren synth lines and analog space swirls. Burn keeps up his trademark use of contrasting elements via a dark and muffled keyboard loop, while ‘Lito lets us know that he grinds hard because “if he didn’t, he wouldn’t have shit.” And that is closure.

The tape actually closes with ‘March 13’, essentially an ad for the upcoming album, which drops on March 13, but it’s confirmation that a definite sound has developed. It’s a trinity of smoke screen sampling, angular electronic percussion and dippy word play that tapers off into multiple tributaries – perhaps best epitomised by ‘Alright’, but present throughout this tape. Burn emerges from Renaissance Gangster the king of silk samples and quartz percussion-led throwback-to-the-future beats, while ‘Lito is crowned an all star of drawl and an MVP of blunt-laden wordplay; no one else can casually slip in and out of timing like him but still stay on point. With their powers combined, they push a narrow-minded state of rap through a tiny hole, and burst out of the other side dripping with fresh colours.