It’s no exaggeration when we say that Graeme Sinden is one of our favourite DJs.

A resident at Fabric and a host on London’s Kiss 100, Sinden’s got superlative taste in the worlds of African house, European and British bass music and more, and rides a line between tear-out club music and discerning selections that most DJs fall either side of.

In his own words, Sinden describes his vision of club music as “all-embracing, fun, disparate and twisted up”, and it’s something he intends to pursue on Grizzly, his new record label.

“I’ve always been interested in ‘grey area’ sounds”, continues Sinden in the press release, “music you can’t quite put your finger on, stuff that sits between genres and puzzles you at the same time. Grizzly will bring this sense of unexpectedness, flitting between styles – it’s serious music without taking itself too seriously.”

The label’s inaugural release will be a collaboration between Sinden and Sbtrkt, who’s recently remixed Modeselektor, Tinie Tempah and more to sterling effect. The A-side is titled ‘Midnight Marauder’, while the flip is titled ‘Kind of Familiar’, potentially a nod to Sinden and Switch’s Get Familiar club night. That’s out on April 19.

Grizzly 002 takes the form of ‘Arnold Classics’ by France’s Brodinski, a track that’s already been remixed by Tony Senghore, Egyptrixx and DJ Sega.

More information on FACT’s pages regarding Grizzly will come when we talk to Sinden this week. ‘Til then, here’s the sleeve for ‘Midnight Marauder’: 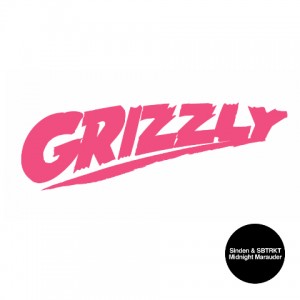