FACT is pleased to present the premiere of the new video from Mock & Toof, directed by Trevor Jackson.

Released to accompany ‘Farewell to Wendo’, the lead single from M&T’s imminent debut album, the elegant and ever so slightly titillating film stars Munich-based singer/songwriter Pollyester, who contributes vocals to ‘Wendo’ and a number of other tracks on the album (which is entitled Tuning Echoes and due out on May 24).

“We’ve never been about ‘nu-disco’, whatever that means anyway,” says Duncan, AKA Mock. “Anyone who knows our music will know that we’re a bit all over the place as producers, if we like an idea we run with it and we’re much more comfortable being eclectic and not pigeonholed. Hopefully the album will help us in our quest for non-categorisation…”

“Pollyester’s not only got a cool voice but lyrically she’s amazing, she totally gets what we want to do musically,” he says of their collaborator.

The video is the work of Trevor Jackson, the London-based musician and artist perhaps best known for his recordings as Playgroup and The Underdog. As well as running the legendary Output label and being a DJ of great renown, Jackson has flourished in the visual realm: exhibiting and performing around the world and creating cover art and videos for the likes of Soulwax and Matias Aguayo. 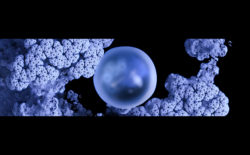 FMKF dance for the sake of dancing in new film, Skylark