Dub Police boss Caspa will release his second mix compilation, after his Fabric 37 CD with Rusko (who has a CD coming out himself, actually).

Fabric 37 was originally meant to be Justice, who submitted a mix that was heavy on the French pop and rejected. Caspa and Rusko, who’d had their biggest track to date in Rusko’s ‘Cockney Thug’, stepped in with an arsenal of dubplates that showcased their midrange and comedy sample-heavy brand of dubstep, and compiled what was actually a pretty good mix.

Fast forward a couple of years and Caspa’s bi-monthly Dub Police session at Fabric is – according to the press release for this mix CD – the most successful night at the club, and between the pair of them they’ve worked with Diplo, Ludacris, Depeche Mode and more. Oh, and Caspa released a (pretty terrible) debut album. But his Dub Police label did release D1’s stonking ‘Jus Business’, so it’s not all bad.

Anyway, Caspa has announced a new mix CD, titled My Style! It’s the first in a series of Dub Police mix CDs, and features new tracks by The Others, Trolley Snatcha, Emalkay, D1 and Caspa himself, as well as some already established anthems from Joker and Joy Orbison, whose ‘Hyph Mngo’ closes the mix. Which seems a bit weird.

Caspa’s My Style! will be released via Dub Police on June 7, and comes with a bonus DVD featuring footage of the Dub Police crew. There will also be a My Style! tour – dates follow the tracklist: 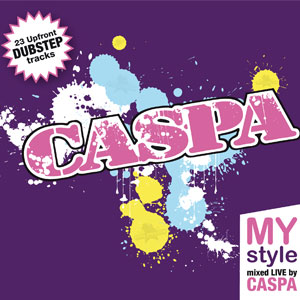