FACT’s The Essential… series returns for 2010, with a ten record primer to one of the all-time great techno musicians, Robert Hood, by Ruaridh ‘The Village Orchestra’ Law.

One of the founding members of Detroit’s Underground Resistance movement, Robert Hood has become one of the most influential and important figures in techno. Eschewing the crossover releases and high press presence of his contemporaries, he’s been content to distill the essence of his sound over 19 years of tireless exploration of purity.

Despite his presence in UR, and his collaborations with Mills as H&M, X101, etc, this guide is limited to his own solo releases. 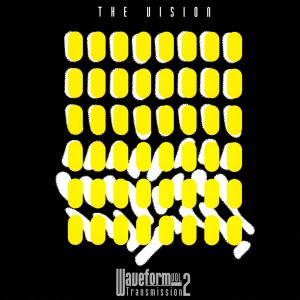 Simultaneously with his time in a nascent UR, Hood had set up the Hardwax label to release noisy, fast, unrefined-sounding techno, both solo and with Claude Young. Although the tracks on this Tresor release aren’t directly lifted from the Hardwax records, or the Vision 12” released on UR, the sound is similar – heavy, atonal DJ workouts with plenty of rattling percussion and relatively high BPMs. As the ‘non Mills’ chapter of the Waveform Transmission series, it’s often overlooked in favour of the two classic Mills albums that bookend it, but there’s still lots to appreciate today – ‘The Protector’ sets a pattern for future Hood tracks with an insistent whistle pulse and Berlin stab whilst ‘Projectile Darts’ sets UR style drums against two interlocked riffs. 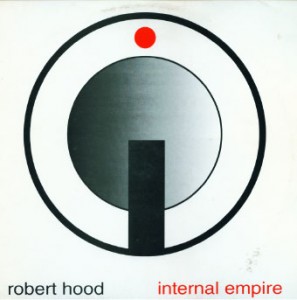 From the harsh styles of Hardwax came a shift to a more refined, pared down sound and with it a new label, M-Plant. After the excellent ‘Protein Valve’ 12”, Hood moved onto his next album. Whilst W.T. Vol. 2 felt like a compilation of tracks, Internal Empire was guided by a narrative logic and felt like a whole. Jointly released with Tresor, this became most people’s entry point into Hood’s work and seemed like a statement of intent. Gone were the harsh textures, to an extent, and instead the appearance of the looped repetitive minimal patterns that he would hone throughout his career. Owing as much to Sahko records and Mika Vanio as it does to UR, tracks like ‘Minus’, which plays with Reichian phase delays, and ‘Home’, which predates similar sounding euro minimal by at least ten years, are as devastatingly simple and potent now as they were in 1994. 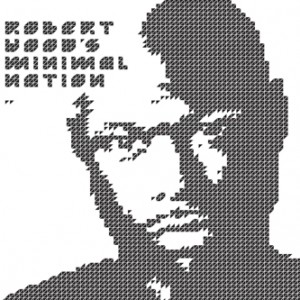 If Internal Empire was setting out the new parameters, Minimal Nation almost represented the completed equation. It’s difficult now to overstate how important this release was to the development of techno – and further, with echoes appearing in tracks like Gatekeeper’s ‘Blip’ and a track turning up on a Modeselektor mix album as well as more the obviously influenced. There’s none of the concessions to home listening that feature on the previous album – most tracks consist solely of sparse percussion and a spiralling riff, sometimes tuneful but more often dissonant and driving. ‘Unix’ is practically the perfect techno track and as such is guaranteed a frenzied reaction to its stabbing organs wherever it’s heard.

New listeners should bypass the original Axis pressing or M-Plant vinyl reissue and go for the 2009 remastered release – the vinyl comes with a bonus CD of the tracks whilst the actual CD release comes with an essential DJ mixed version by Hood himself. The mix is the ideal way to hear them played as intended. 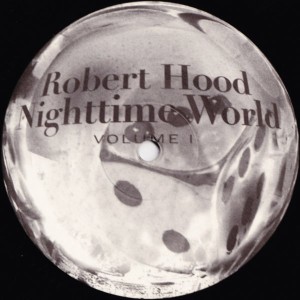 A rare venture to another label – Austria’s Cheap, as known for its jazz influenced records as it was for techno – brought out a hitherto unexplored area in Hood’s sound. Embracing his love of jazz and downtempo, Nighttime World is still distinctively the Hood of before – there are a plethora of straight up 4/4 club tracks on here, not least ‘Untitled’ which is based on his epic ‘Moveable Parts’ 12” – but there’s also a low swung, smoky flavour guiding the atmosphere, most tellingly on the opening percussion jam ‘Behind This Door’ or the piano-vamp led hip-hop tempo ‘The Color Of Skin’. Hood would go on to develop this sound on the often overlooked Nighttime World Vol. 2 back on M-Plant in 2000, and indeed almost entirely dropped the 4/4 in favour of further downtempo moods. 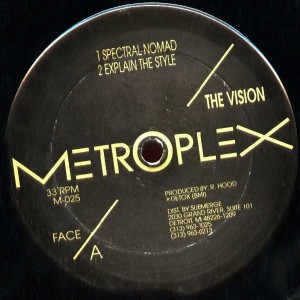 Another switch of label, this time to fellow traveller Juan Atkin’s Metroplex. This 12” is absolutely essential for anyone interested in the more out-there variants on the Detroit sound – a spacey, echoey feel covers these four tracks, which all feel like they’re part of one huge, neverending jam based on the same constituent parts. ‘Detroit: One Circle’ is the well known track, with its insistent spoken ‘Detroit’ mantra and soft pulsing riff, but the other three are just as great, with ‘Explain The Style’ harking back to a Minimal Nation style riff. 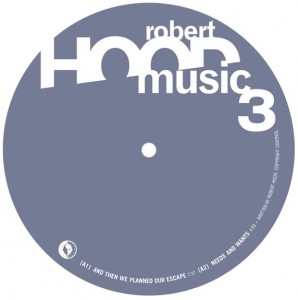 A jump of almost ten years to the next entry – Hood was active during this time, with albums on Peacefrog taking in more diverse influences, and his Drama and Duet sublabels of M-Plant lending a different spin on his trademark sound (including a perhaps ill-advised edit of ‘He’s The Greatest Dancer’), but space constraints mean a jump to this series of 12”s on Music Man, which marked a further change in his sound. The three 12”s together would make a perfect album release, with variations from Drexciyan electro on ‘Razr’, to the Berlin glide of ‘And Then We Planned Our Escape’ (ubiquitous in discerning sets at time of release, and rightly so), taking in rough drum machine splatter on ‘Needs and Wants’ and the driving, filtered Los Hermanos remix of ‘Still Hear’ (for my money the best thing they did). The Hoodmusic 12”s felt like a summing up of what had come before and a pointer of the new directions to come. 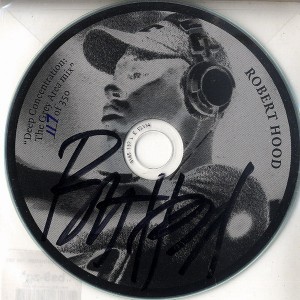 Despite being a prolific DJ, Hood has only released three mix CDs – Rare Species, a mix from 2002 of mostly then current European techno, a lacklustre instalment in the Fabric series, and this hand numbered, limited to 100, autographed techno fanboys wet dream. The content lives up to the frighteningly limited nature of the beast though. Despites Hood’s DJ sets often consisting of 90% his own material, this mix takes in everything from the dub techno of Deadbeat, Maurizio, Round Three and Donnacha Costello, to the harder likes of Surgeon and Marco Carola with classics from DBX and Hood himself liberally sprinkled throughout. There’s no tracklist and there are whole forums dedicated to working out it’s precise content – but better to forget that and just enjoy what may be, in my book, the best techno mix CD there is. 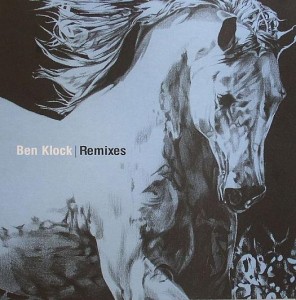 A fair few remixes have borne Hood’s name – some classics, like his reworkings of DBX and Steve Bicknell, others highly forgettable (better to steer clear of the explosion-in-a-keyboard-preset-factory of his Oliver Ho mix). To pick one best is easy though. The debt owed to Hood by the Berghain new school of steely sleek minimalism was always clear, and direct tribute was paid by Klock in his requisitioning of Hood to remix this track from his One album. The vocals, always fairly sparse breathy textures, are reduced to punchy gasps and stabs, recalling the Ealing techno of Max Duley which itself took a lead from Hood, while huge rolling drums circle around relentlessly and sinetones rise and fall. There’s a weightless swing to this mix which means it doesn’t sound out of place dropped, out of context, alongside dubstep or Funky, and is devastating wherever it’s heard. 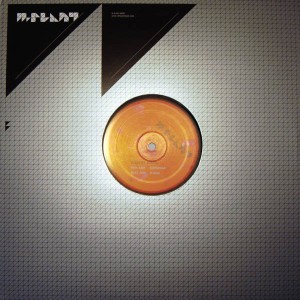 Hood’s most recent release before his latest album and preceding 12”, these two tracks show with their absolute simplicity and purity of content why no-one can come close to nailing the true minimal sound. ‘Superman’ hits bassy stabs and insistent rides and claps to great effect, but it’s ‘Range’ which does the damage, coming across as a 2010 update to his original ‘Unix’, filtering a discordant sickly portamento organ riff up, up and up again backed with a simple drum pattern. 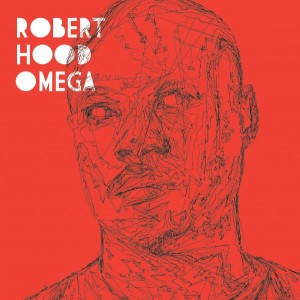 The new album takes the Heston-starring The Omega Man as inspiration, and true to form it’s no mere collection of DJ tools. Each track evokes the grim desolation of the film, and manages to work on the floor as much as the home. ‘Think Fast’ builds electrical impulses against a soft string drone, whilst ‘The Plague (Cleansing Maneuvers)’ is a beatless synth excursion filled with jumpy tension. ‘The Workers of Iniquity’ strips everything down further to an almost Raster-like clipped beat, interrupted with echoed hits. Hood once again manages to walk his unique path with just enough variation to keep it interesting and enough vision and inspiration to move techno, like his erstwhile UR companions Mills and Banks, into a whole new dimension.