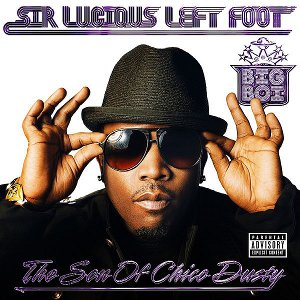 Such is the hype surrounding Sir Lucious Left Foot that this review barely requires an introduction. In short: the slightly less famous but no less brilliant member of Outkast is releasing his first solo album. There’s been delays, and there’s been disputes (Big Boi recently revealed that Jive Records blocked Andre 3000, his partner in Outkast, from rapping on the record). There’s also been ‘Shine Blockas’, ‘General Patton’ and ‘Shutterbugg’, a trio of pre-emptive singles that are frankly, all fantastic.

And in a way, that’s a problem. When you build anticipation to an album with three songs of that quality, then some of it will inevitably disappoint – and Lucious Left Foot isn’t exempt to this rule. So first disappointment: ‘Follow Us’, the latest track from the album to receive a video, is basically ruined by an appearance from these guys. I don’t know who they are, but according to their myspace one of them played session guitar for the Dungeon Family, and they claim to be a mixture of “classic emcee skills, pop sensibility and rock energy” with “a dash of inspiration from a literary icon.” Oh yeah, and they also fancy themselves as your girlfriend’s favourite new band, but when my girlfriend heard this song she thought they fucked it up too. God knows why Big Boi went for them when he could have had Cee-lo Green or someone, but they’re here, and they suck.

I’m not sure how well Knightheat’s guitar-led production on ‘Tangerine’ sits with the rest of the album – the sheer funk of tracks like ‘Shutterbugg’ and ‘Daddy Fat Sax’ really show it up – but that demented switch-up on the chorus just about justifies it, even if the “damn the American dream” line comes across as pretty forced on what’s basically a sex track. Then there are tracks that could be better: Yelawolf’s disposable guest verses on ‘You Ain’t No DJ’ don’t do justice to Andre 3000’s creeping production job, and ‘Back Up Plan’ feels more like an afterthought than a closer of the rest of the album’s quality.

But really, these are minor gripes, and hardly come as a surprise: even Outkast’s classic albums would have benefitted from some tighter editing, and Lucious Left Foot is still more consistent than the deservedly acclaimed recent albums by The-Dream and Drake. At its best, it’s unbeatable: ‘Daddy Fat Sax’ is a glorious opener, while ‘Be Still’ breaks up the album’s flow with a swooning pop track that wouldn’t feel out of place on Kanye’s first record. Multiple listens barely dampen the neck-breaking intensity of ‘General Patton’, while the talk-box funk of ‘Shutterbugg’ already sounds timeless. ‘Shine Blockas’ is a masterpiece, comfortably one of the best hip-hop tracks of recent years, and good luck getting the Lil Jon-produced slow jam ‘Hustle Blood’ out of your head.

Outkast were great for myriad reasons, but at the heart of their success was the fact that despite seeing themselves as a group in the lofty lineage of Prince and Parliament, their foundation and core were always hip-hop – as they often reminded us, they were a pair of motherfucking pimps. When the balance shifted away from that, it was the end of the group’s prime. Lucious Left Foot addresses this issue and redeems it, casting its eye to casino funk, cosmic boogie, electro, backroom R’n’B and classic soul while staying defiantly hip-hop; sounding fuck-a-major-label while being released on Def Jam. It’s not an album that’s full of surprises, but rather than a lack of quality, that’s simply testament to the fact that this is how a Big Boi solo album always should have sounded.