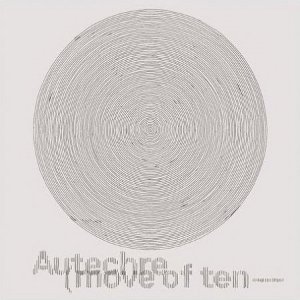 It doesn’t take an Autechre expert to work out that Move of Ten is intended as a companion piece to February’s Oversteps. Before you ever listen to a single beat of the record the comparison is fairly obvious – the two records’ near identical cover art is a fair giveaway.

Taking a quick look at Autechre’s discography, Sean Booth and Rob Brown tend to average the best part of two years between full length records. So the idea of Autechre releasing two albums in the space of six months is unheard of; which is probably one of the reasons that, officially speaking, Autechre are calling Move of Ten an EP.  Of course, at just under 50 minutes in length it is shorter than your average Autechre album. Surely though, I’m not alone in thinking that a ten track release that breaks the 45 minute mark is really stretching the definition of an ‘EP’?

Either way, the best way to approach the record is to keep Oversteps in mind. That’s not to say, however, that Move of Ten is merely a collection of castoffs or left-over cuts from that album’s recording sessions. This is certainly the sound of the same Autechre we heard on Oversteps, calling upon many of the same ideas, tricks and production techniques that were present on that album, yet this time the duo are employing them to different ends. Whereas Oversteps leant towards expansive, atmospheric compositions Move of Ten is, at least by Autechre standards, slightly more dance floor friendly.

The mess of seemingly random synths that make up the first few seconds of opener ‘Etchogon-S’ are instantly recognisable as classic Autechre territory. But what quickly emerges from this brief atonality is a surprisingly funky, computerised beat. Personally, I’ve always found this to be Autechre’s best side – when they let the influence of late eighties, drum-machine driven hip-hop rear its head amongst their mechanised tunes. The same influence is present in the album’s closing track, and highlight, ‘Cep puiqMX’; a fuzzy, beat driven number that almost sounds (if you’ll excuse me a cheap analogy) like what might happen if Flying Lotus were to be sucked into power-hungry computer from the movie Tron.

Elsewhere Autechre break out other classic moves: ‘y7’ and ‘M62’ are acid-laced techno numbers built to be listened to after a healthy dose of sleep deprivation. Here, as have done on their two previous albums, Autechre return to melodic territory, playing with moving, polyphonic synth textures and thick saw-tooth leads.

Unsurprisingly, bearing in mind the links we’ve already identified between Move of Ten and Oversteps, many of the same strengths and weaknesses that were present on that the last album are applicable here. In negative terms, a few of the more bass heavy, dub-tinged tracks – such as ‘pce freeze 2.8i’ – feel a little overly cold and slightly less inspired than Autechre’s better moments.

At the same time, two decades into their career, Autechre’s music no longer fits into the overall landscape of electronic music in the same way as it once did. Whereas the duo always used to be a futuristic techno project seemingly decades ahead of their contemporaries, these days Autechre no longer feel like they’re working in the future so much as a some parallel plane of existence.

Autechre’s music is much like the vision of the future depicted in Stanley Kubrick’s 2001: A Space Odyssey – just as 2001 came and went and, low and behold, we’re not living on the moon, in 2010 modern music is still yet to fall into sync with Autechre’s unique way of working. Still, as with Kubrick’s predictions of space-age living, we’re happy to lose ourselves in Autechre’s vision of a future that will probably never be.

But I’m massively digressing. There’s no need to over-think the finer points of Autechre’s state of existence here, so let’s cut to the chase. Oversteps, as Autechre followers already know, was certainly a very good record. And, unsurprisingly given the comparisons, Move of Ten is another winner. All minor criticisms and musings aside, Autechre are going through a strong period; bringing melody and accessibility back to their sound without losing their unique edge. Whether you want to call Move of Ten an EP or a full album, we’ve been lucky enough to be treated to two fine Autechre releases so far this year. So no complaints, right?