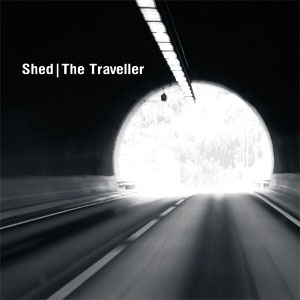 It’s always a little nervy seeing an artist you truly love stake out a path that is defiantly his own; while the results can be truly wonderful, taking risks is… well, risky. No matter how well you might understand that particular artist’s intentions and choices, it doesn’t mean that everyone else is going to. To put this in context, Shed’s second album is an incredibly gutsy one; Rene Pawlowitz evidently doesn’t give a fuck anymore, though whether he ever did is a question best saved for another article.

A man of many guises (Shed, WAX, EQD, STP), up to this point it seemed like each one had its purpose, its function, its place. Even 2008’s Shedding The Past, widely considered one of the defining statements of post-millennial techno, was relatively single-minded for Pawlowitz, a techno concept album – Shed doing his techno thing impeccably over the course of the album.  But his work under other names has explored other strains of dance music, namely dubstep. For his second album as Shed, Pawlowitz has abandoned his former approach: instead of focusing on techno, The Traveller is a thrilling recombination of all aspects of his extensive musical persona.  It might as well be credited to “Rene Pawlowitz”, as there’s not much that connects this album with its predecessor aside from its intrinsic genius and its obsession with the breakbeat. For all intents and purposes, the new and well-travelled Shed is a different beast altogether.

While it’s no less structurally solid than Shedding The Past, it’s a Hell of a different ride: fourteen tracks in under fifty minutes, each one averaging around three minutes. Despite appearances, these are not mere sketches or experiments; every track on The Traveller is as carefully composed as anything Shed has disseminated in the past, just packed into dense soundbites that overflow with texture and colour almost to the point of bleedthrough. Liquid breakbeats crash through the walls at unpredictable points and leave just as quickly as they came, as ambient swells overwhelm and saturate the tracks with blinding light, the aural approximation of the tunnel-exit artwork of the cover. You aren’t going to find your typical thump-thump-thump-thump beats here, as Shed’s percussion is both impeccably detailed and beguilingly elaborate.

It would be foolhardy to attempt to pigeonhole The Traveller, and even its genre exercises feel out of their own bounds. The album is a smooth, fluid ride; indeed, countless listens later and I still have trouble figuring out which track is which, a good sign for its gluey-but-smooth cohesion. There are moments that stick out, however; the way the beats dangle back and forth floating above low-end annihilation on ‘Keep Time’, the way of the strings of  ‘44A (Hard Wax Forever!)’ slam to a halt in breathtakingly fluid motion, and the microscopically-diced acid bassline of ‘My R-Class’ that feels like its closing a pinion on your head. Two tracks in particular are simply riveting, a privilege to experience. ‘The Bot’ is six minutes of straight-up dubstep at a painfully slow pace, where each drum hit is like a glorious fix that turns slightly more and more frequent as the track progresses – dynamics are rarely this impactful because no one else would be brave enough to put so much dead space between beats. On the other hand, closing track ‘Leave Things’ wraps things up in suitably epic fashion, arpeggiated riffs and slamming breaks colliding for something akin to ambient jungle.

For better or for worse, the idea probably most often associated with Pawlowitz is the now inescapable pseudo-ideology of “true techno music”, but it’s a spiritual concept more than a practical one. In abstract terms, The Traveller is a techno album through-and-through, mostly beat-oriented, arguably futurist, and sometimes danceable, but in generic terms, it doesn’t really fit the bill. It’s all the more impressive for it; ‘Atmo-Action’, for example, even incorporates pads that sound suspiciously similar to the kind of twilight nostalgia espoused by the Autonomic sector of drum-n-bass producers. Where Shedding The Past swallowed an entire history of techno, The Traveller swallows an entire bustling international scene of electronic music. We should feel lucky that we have someone as talented and visionary as Rene Pawlowitz to digest it all for us.