Solar Bears: She Was Coloured In 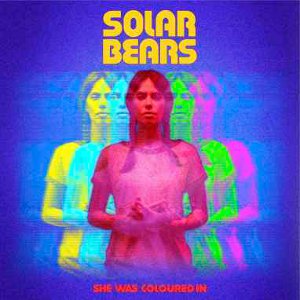 How do you begin describing something that sounds so cozily familiar yet like nothing you’ve ever heard before? The music of Ireland’s Solar Bears inhabits a world that isn’t so much tinted by nostalgia as by a separate sense of otherworldly antiquity: sometimes sounding like something out of an alternate universe late-sixties existence and other times like an ancient time capsule left behind by extraterrestrial beings. On their debut LP She Was Coloured In, they present a storybook soaked in vivid, oversaturated colours, made up of shapes and textures that appear familiar but aren’t really like anything seen or heard before.

The toolbox of sounds utilized by John Kowalski and Rian Trench is made up of synths, guitars, strings, and drum machines, though they use these rudimentary ingredients with remarkable finesse and understated elegance. The album begins with echoing distorted guitar, one note ringing out against what sounds like an 808; it might be called an intriguing alternate take on UK bass, as synths swirl around only to give way for a funky breakdown with bulging distorted basslines. That each track is this restless might end up rather messy were it not so captivating; and through She Was Coloured In’s 15 tracks, nothing feels out of place, as the listener is dragged through scenes like the Dylan Carlson desertscapes of the title track and the mellotron funk of ‘Primary Colours at the Back of my Mind’.

Despite the preeminence of synths and drum machines, organic is the key term here; the album overflows with “natural” sounds, electronically modified with the album’s self-conscious warp and decay.  So much of the album sounds tweaked just so, viewed through an old, but well-kept VHS tape or audio cassette – it’s a gimmick utilized by any number of bedroom acts all over the world in 2010, but in Solar Bears’ hands, it’s used to subtly lend atmosphere rather than overbearing nostalgia. A track like ‘Twin Stars’ pairs breathy synths with militaristic drum fills that sound hollow and pithy: they turn digital elements natural and imbue these cold machines with human warmth.  Their synthesizers sound more like humid breezes, as on the near-ambient ‘Cub’ or the kosmische layering of ‘Solarization’.

Not everything is English countrysides and woodland creatures, however; and when the duo move into other territory, their success is almost universal.  ‘Children of the Time’ uses contextually anachronistic vocoder for the album’s sole flirtation with vocals, and while the result can’t help but recall similarly-minded digital pastoralists Black Moth Super Rainbow, it betrays a thrilling potential for future expansion of the Bears’ sound. Their experiments with chugging disco – whether it be the bubbly bass-driven passages on the overdriven synth mania of ‘Crystalline (Be Again)’ or the prickly Moroder-isms of ‘The Quiet Planet’ suggest that their ear isn’t completely shut off to the world of dance music.

Above all, Solar Bears is peculiar music; despite its inviting and accessible nature, it’s not easy to understand, music that can prove frustratingly opaque or nauseatingly transparent.  When I spoke with the band, they emphasized their love of film music, a trait which shines through in the album’s use of big and overwhelming melodies.  Sometimes it works – the album’s closing trio of tracks is a stunning mini-opera, screaming slide guitar slathered all over everything before the stunning ambient closer, all piano, mellotron and acoustic guitar like something taken off of Pink Floyd’s Ummagumma. Unfortunately, sometimes it doesn’t work, as on the too-precious happy ending of ‘Head Supernova’.  Maybe video game music is a better analogue; while I’m not going to place words in the band’s mouths, their use of simplistic-but-effective melodies smacks of the culturally-embedded soundtracks of classic videogames like the Final Fantasy series.  When it comes down to it, She Was Coloured In is a captivating dialogue between the earthiest depths of the human realm and the spaciest, most hallucinogenic of imagined alien worlds.  If this all sounds like a little much for you, so be it, but if you can find a way to let these subtle tunes waft their way into your subconscious, you likely won’t be disappointed with the fantastic images and feelings they’re bound to conjure up.