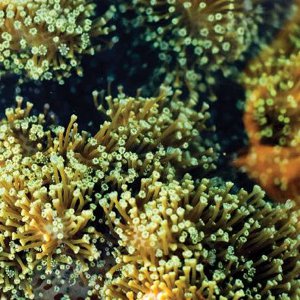 Do ghosts have a heaven? If they do, I’d like to think it sounds something like See Birds, the debut EP by New York’s Balam Acab, and the first release on 20jazzfunkgreats writer Robin Carolan’s much-hyped record label, Tri Angle.

When you’ve read about Tri Angle, it’s probably in reference to “witch house”, the blanket term for a wave of artists making, well… music that often doesn’t sound that alike. There’s little of the witching hour about See Birds – this isn’t dark or sinister music; in fact, it’s incredibly serene, full of crystalline shapes viewed from underneath water, ripples filtering their form as just out of sight vocals, synths and harps get refracted through its surface.

There are often solid foundations to these tracks, such as the echoed drum beats on ‘See Birds (Moon)’ and the clicks and bassline on ‘Regret Making Mistakes’, but they’re eventually drowned in nymph-like vocals harmonising, tides lapping and cyan tones that seep into each other and swell up into gloriously euphoric climaxes. It’s like the birth of spring, but rendered in a permanent state of flux. No doubt Tri Angle will get darker than this as the label progresses, but it might be a while until it sounds this angelic again.