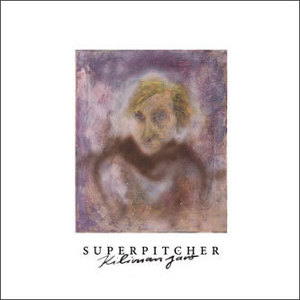 Aksel Schaufler, better known as Superpitcher, has long been one of Kompakt’s most reliable sources of talent. He’s also one of the label’s most distinctive characters, a dandy generally found with a scarf tied rakishly around his neck and a cigarette dangling from his mouth. As a DJ, he’s a consummate performer; years ago, I saw him drop T. Rex at 6 AM at a club in Cologne, mouthing along with Marc Bolan’s vocals while swooning over the decks. He’s a sensitive guy who comes across as being darkly romantic and impossibly moody; on his track ‘Traume’, from his last solo album, the impressive but uneven Here Comes Love, he once remarked, “The English word is ‘dreams’ and that is what it’s all about… it’s a cover, a longtime favorite of mine, I cried a lot listening to it…”

Despite his larger-than-life persona as Superpitcher, Schaufler the man remains an enigma; he seems quieter and more introverted than many of his Kompakt labelmates. You know he can rock a party – he has released more peak-time dancefloor bangers over his career as Superpitcher than some entire labels – but you also get the sense that he’d be more at home brooding in his apartment than dancing in a club. In a recent interview in Self-Titled, Schaufler said that the title of his new album, Kilimanjaro, referred not to the dizzying thrill of reaching the ultimate peak, but of “comfort in solitude… themes I’ve always had, too, like breakups, heartbreaks, get-overs and get-togethers.”

It has been six years since Here Comes Love, and Kilimanjaro was worth the wait, a breathtaking effort that tugs the heartstrings from start to finish. Schaufler sings – in English – on nearly every track, and his singing has vastly improved since 2004; he displays far more control over his voice, easily gliding between hushed whispers, soft crooning, and full-on belting. On older tracks like ‘Happiness’, his lyrics and his delivery, however serious and heartfelt in their intention, could seem wooden and distant. Here, his lines are less straightforward, more oblique, and more conflicted – and more emotionally affecting as a result. “I’m a country boy, I got no memories,” he sings in ‘Country Boy’, layering his own mournful vocals on top of each other: “black sheep, black sheep, of the family.” On ‘Friday Night’, one of the album’s standout tracks, he teases: It’s Friday night, and I’m not dancing,” just as a decidedly danceable beat kicks in.

Schaufler has always had a knack for crafting a memorable tune; nearly ten years later, old hits like ‘Heroin’ still stand up, and tracks like ‘Mushroom’ and ‘Fieber’ still stick hard to the brainpan. It’s an enviable skill, and he’s honed it here in stellar songs like ‘Joanna’, revealing that he really is not only a top producer, but also a formidable pop songwriter. Kilimanjaro is an impressive balancing act; it finds Schaufler luxuriating in melancholia without sinking so far into the abyss that he can’t find his way out.