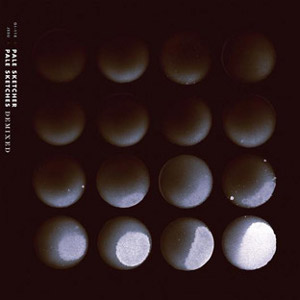 Not content with Godflesh and Jesu (and God, Head Of David, Techno Animal, Curse Of The Golden Vampire, The Fall Of Because…), legendary metaller Justin K. Broadrick has branched out into yet another musical identity. Rather than being a side project, though, Pale Sketcher would appear to form part of his main lineage (‘Jesu’ being a song on the Godflesh swansong; Pale Sketches a Jesu compendium of sorts).

While essentially a set of reworkings of existing material, hence the title, the sounds on this record evolved sufficiently in Broadrick’s ears to justify this refresh of nomenclature. Or, as he would have it, this set of recordings would serve to even further alienate the “hardcore” old school Godflesh heads.

For the most part, that observation is correct. After Godflesh’s brutal industrial and the early Creation-leaning post-metal of Jesu, the majority of this Pale Sketcher record presents a new sound. Indeed, it’s not until track four, ‘The Playgrounds Are Empty’, that a song sounds out-and-out like Jesu: it’s slow, with sparse beats, and the soft side of Broadrick’s trademark vocal melody style (that being simple yet effective, in a nutshell, and a formula from which his singing rarely strays). It’s telling that the more satisfying – and different – songs are the ones with either no vocals or very changed ones.

Similar is the slightly electronified ‘Supple Hope (2009 Mix)’, whose lack of guitars might shock the luddites, but which nevertheless really hints at Jesu. It’s a sound that works, but given that this is a “demix” album, more interesting are the songs that move furthest from that sound, now nearly a decade old.

Far more satisfying is ‘Dummy (Bahnhoff Version)’, which recalls Techno Animal’s Brotherhood of the Bomb or Godflesh’s Love and Hate in Dub in its liberal use of fat, satisfying bass. On top of that, JKB has placed high drones and slightly Boards of Canada-esque echoing, short, melodic synth stabs. It works very well, and sounds nothing like any of his existing projects. The same could be said for the woozy, disorienting ‘Plans That Fade (Faded Dub’, which does feature vocals, albeit ones that have been put through various FX ringers until they only really resemble the faintest memory of a vocal, lingering in the recesses of Broadrick’s computer.

The record opens and ends really strongly. Closing with the aforementioned dubby songs, it begins with really optimistic melodic electro. First track, ‘Don’t Dream it (Mirage Mix)’ is a beat-driven piece with strong hooks, which leads exquisitely into the more elegant textures and heartache of ‘Can I Go Now (Gone Version)’. Its gradual melodic evolution, trebly chimes and overall lushness recall the absolutely godlike ‘Wake’ by the criminally overlooked Manual: as fine a song as anything-gaze got last decade.

While ‘Wash it all Away (Cleansed Dub)’ hints lovingly once more at Broadrick’s fondness for Boards of Canada, the alien waves and breakbeats of ‘Tiny Universes (Interstellar)’ represent another new sound entirely. Which makes one wonder what exactly Pale Sketcher is. Currently its identity would appear to be ‘Not Jesu’, which is fine, but raises questions as to why this couldn’t have been released under the Jesu name anyway, albeit with the qualifier of alternate mixes on it, which indeed it has.

It’s certainly heartening that Broadrick is sufficiently self-aware when it comes to his own material that he is happy to mess with it in such marked and aesthetically satisfying fashion, but this initial PS release is defined only by its otherness in the context of his work, rather than by its own identity. Is it sort-of Jesu or a strain of idyllictronica; Dubflesh or something else entirely? Perhaps, in this age of blinkered genre artists, this eclectic collection of approaches is the identity in itself. Though that may be the case, the effect here is very definitely one of a compilation, which makes the prospect of all-new PS material intriguing. If it is this varied, will there be at least some unifying thread running through it?

As suggested above, Broadrick’s vocals are very identifiable: Godflesh was shouty Justin, while Jesu was melodic Justin. As Pale Sketcher is clearly more electronic than past work, perhaps it might be defined, as the stronger songs here are, as disembodied Justin, all Tron-like, living in a virtual world. It would certainly differentiate his sound, and present the potential for further exciting development, but mainly it’d really piss off the so-called ‘hardcores’. Wherever this project goes, these Jesu Demixes (a self-effacing term if ever there was one) are a fine start. 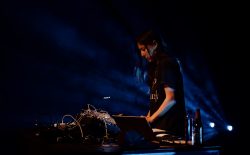