John Foxx is most famous for his spiky, Ballard-inspired synth-pop masterpiece Metamatic. Less well known his extensive and inspired work in the ambient mode.

With his mastery of old-school analogue synthesis and new digital technology alike, Foxx was always going to be well disposed towards making immersive ambient music; his musicality and grasp of harmonics has meant that the resulting efforts amount to far more than mere soundscapes. We can’t recommend enough Translucence + Drift Music, his 2003 collaboration with Harold Budd, the American pianist and composer who has worked extensively with Brian Eno (most notably on The Pearl, which Foxx has described on several occasions as “a real landmark”).

But Foxx’s most hefty ambient work – both in terms of duration and concept – is his Cathedral Oceans trilogy.

“Cathedral Oceans started when I was kid, when I sang in a choir briefly,” Foxx told FACT in an interview earlier this year. “During that time I became very interested in the way that sound worked in big spaces, churches particularly. I learned a lot of things there but I didn’t understand a lot of what I’d actually learned until later. And when I started recording I’d almost forgotten about all that until I started using echoes and reverberations, and then I realised that I could use some of that to simulate things that happened when I was singing in churches back then – and use that old knowledge of how a single voice in a massive space behaves.

“So I started experimenting, down in the basement of the studio, and when I had some time I used to set up tape-loops and reverberations and I’d sing into them and see what happened, and gradually negotiate my way through it. Over the course of many years Cathedral Oceans began to take shape – it did take a long time. In the meantime I could hear happening, in the stream of things going by, other people who were beginning to work in the same way.”

There was also a significant visual trigger for the work. “I started taking photographs of buildings and statues,” Foxx says, “Beginning when I was on tour with Ultravox. I didn’t know what to do with any of these things. And then one day I picked up two slides and overlaid them – one was of some foliage, and the other was a face from a fountain statue, and you suddenly got this other reality coming through, which was unusual then. Nowadays Photoshop can do it very easily, but back then that kind of montage really wasn’t easy to achieve. It really inspired the musical juxtaposition – of that old-style church music with modern technology and synthesizers and different ways of singing, creating notional space rather than real space. So I started working in parallel with these two things and gradually built up a library of images and pieces of music.”

Following a long period of gestation, the first Cathedral Oceans CD was issued in 1995,  Cathedral Oceans II in 2003 and the final part, Cathedral Oceans III, in 2005. October 25 this year sees the release via Edsel Records of the The Complete Cathedral Oceans, the first ever anthology of all three albums. Containing all 33 tracks from the original discs, plus a DVD of films made to accompany Cathedral Oceans III, a selection of full-colour images and excerpts from Foxx’s novel The Quiet Man, it’s presented in handsome hardback book-style packaging. This is some of the most absorbing and transporting music ever made, and you’d do well to get it in your life. 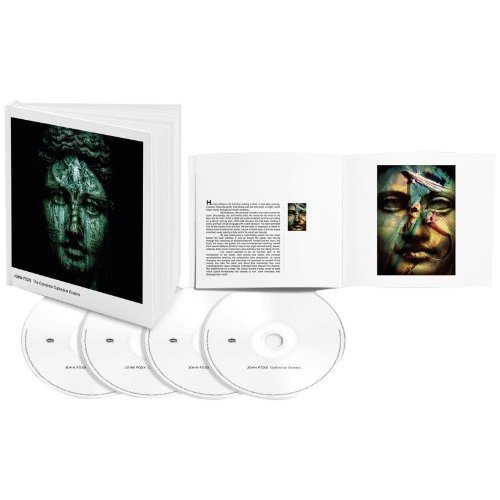