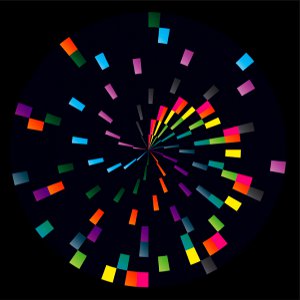 As the most colourful presenter on Rinse, it can be easy to forget just how dark and minimal Scratcha DVA’s productions are. Alright, you had ‘Ganja’, which is one of the most playful tracks Hyperdub has ever released, but its A-side ‘Natty’, with those decayed, skeletal drums and loping, diseased rhythm was one of the darkest tracks I can remember achieving something near anthem status in the UK this year.

‘Natty’ gets revisted on ‘Just Vybe’, DVA’s collaboration with Eglo vocalist Fatima, but with the simple addition of some fat, bright chords to that minimal, wind-up drum loop it’s completely turned on its head, resulting in one of the year’s most colourful tracks. Fatima sounds gorgeous over the top, wishing for the simple pleasure of finding some space to do her thing in. UK Funky’s ‘My Girls’? Add some adobe slats and you’re not far off.

On the B-Side, ‘Step 2 Funk’, DVA gets dark again, with robotic percussion that sounds like picks beating against the walls of a mine. The man presents a breakfast show, you’d expect him to be topical.