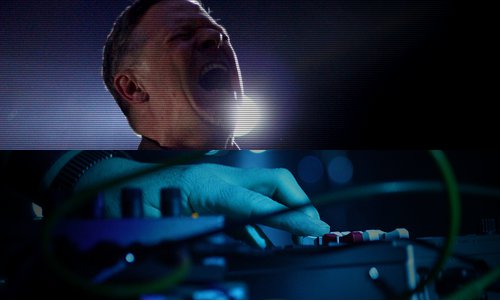 I managed to amuse myself, if few others, over the course of the weekend by telling them that I was covering the Supersonic Festival for “the online home of metal, FACT Magazine”.

To be fair, while Birmingham justifiably takes a lot of pride in its position as if not the home, then at least the birthplace of metal (your Zep, your Priest, your Sabbath, your, er, Death), the Supersonic festival is not strictly a metal festival. The lineup for the eight edition of this Birmingham institution did, however, feature a not unimpressive number of metal acts, as well as an even greater number who create new forms from its constituent elements. In addition to building the links between hardcore rock and dance forms, it followed the path into the blackest of noise and showcased non-metal artists who seemed to draw on primitive and even quasi-religious sources, as well as providing a venue for those who wanted to celebrate the riff in all its ridiculous, repetitive glory. Perhaps the most unifying theme was that whatever the form, be it metal or drum’n’bass, noise or krautrock, it was almost always loud. And wherever we are from, we can all get with that.

The Friday lineup was about extremes, represented by two very different Midlands institutions. The night ended with a trip to the aforementioned Birmingham grindcore factory, Napalm Death, but they were made to sound a little on the feeble side after a visit to the harshest jungle as represented by PCM. The duo have appeared at every Supersonic festival so far, and I can see why: their quickfire succession of high bpm drum and bass made heads spin in the most reliable of fashions. During the rest of the day, various acts tried to find ways to bridge the gap from metal to electronica – from Gum Takes Tooth’s electrified Sabbath riffs, twisting and breaking drumbeats in real time, to Drumcorps’s one-man-metal-band, recreating an entire thrash metal troupe from samples and guitar – although none truly convinced. 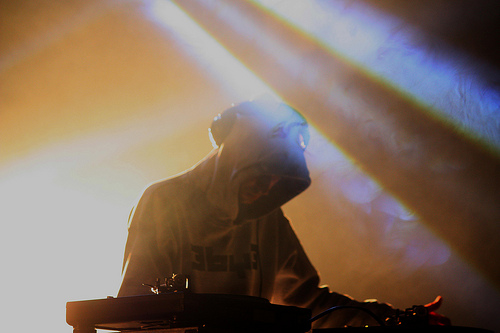 More successful were the occasions where electronic musicians attempted to cross the divide in the other direction. A DJ set from Cloaks featured dubstep and industrial beats so scarred and distorted that they could only be indentified by dental records. It sounded like they’d tossed all of their records off a cliff before playing them. Kevin Martin’s King Midas Sound project was also transformed beyond recognition on the Supersonic stage. All the huge cavernous spaces of the Waiting For You album were filled with electrical hum, swathes of noise, shrieking guitars, and, of course, that massive bass (you could hear the roof rattle). As this heavy sound swirled around, even more than before vocalists Roger Robinson and Hitomi sounded like they were chronicling 4am dancehall psychosis; indeed, if the set had one flaw, it was that it was on about seven hours too early. It ended with five minutes of Martin alone on stage, mistreating a sample of howling heavy metal guitar in a manner which reminded you that in a previous life he shared a band with Godflesh’s Justin Broadrick.

As Martin had shown, the pursuit of noise for its own visceral sake is a worthwhile endeavour, with the right guides, and a member of Wolf Eyes will always show you the right path. Wolf Eyes’ Nate Young has teamed with Werewolves’ Steve Kenney to form Demons, an audio-visual broken synth noise project. Tonight they budged up to let their touring partner Sick Llama share the stage, adding his muddy tape loops and clarinet drones to the mix. The music built and shifted slowly and powerfully, sounding like the first ten milliseconds of a nuclear explosion stretched out to thirty minutes. They occupied the whole frequency spectrum, from an almost dub-like pulsing bass echo at the bottom to some high end hypnagogic bleeps at the top, but with so many layers and so many textures in between; combined with the visuals drifting in and out of focus in the background this became a full-on assault to the senses. 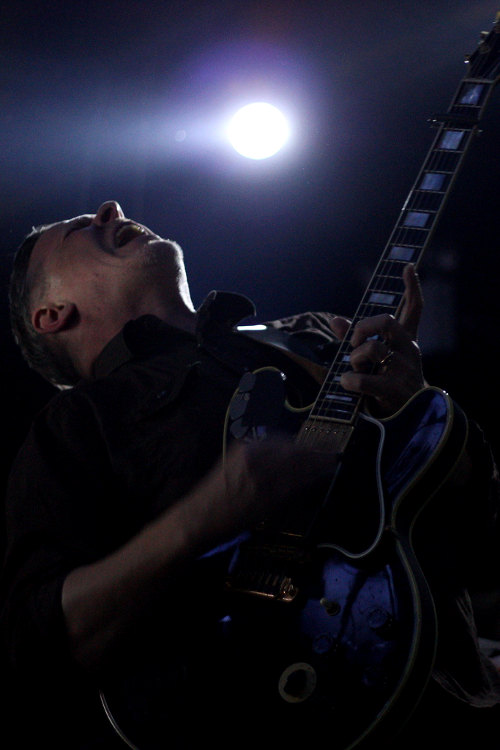 Equally immersive, if engendering a wholly different emotional reaction, were the Iowa pairing (and recent Thrill Jockey signing) Barn Owl. In Supersonic’s Theatre venue Evan Caminiti and Jon Porras sat either side of a huge screen showing monochrome images of wheat fields and flowers, pencilling in their own clouds of deep, dark guitar, utilising fingerpicking, slide, ebow, and huge, billowing plumes of feedback. They walked off stage half way through, leaving a heartbeat bass riff hanging in the air, almost as if their own presence was somehow incidental to the music: what we were actually listening to was the sound of the landscape itself. I had had similar thoughts when watching James Blackshaw play in the Old Library earlier on Sunday. Eschewing the electric guitar and piano of his recent All Is Falling release, he played a twelve string set of older material: but again, I didn’t feel as if he was actually playing it, more like it was playing him. A piece like ‘Transient Life In Twilight’ feels age-old, like Blackshaw is merely the vessel for ancient voices and timeless emotions, flowering from an aching sadness to joyous bloom with a pause, intake of breath and stretch of the fingers. As good as his newer, more arranged music is, it was a delight to hear this music coursing through him again.

The early Saturday afternoon one-two of Part Wild Horses Mane On Both Sides followed by Lichens was a fascinating transition from the primitive and natural to the deeply spiritual and complex. PWHMOBS take elements from jazz, improvisation, rock, field recordings and ethnic music to create something which sounds like absolutely none of these, something free of all time and place. They opened on gongs, switched to flute and percussion, and finished on harmonica and birdsong, blissfully ignorant of genre divide in their search for some sort of core truth in all this music.  The similarly uncategorisable Lichens, aka Rob Lowe, stole the weekend with a set of modular synth and vocal loops, his choirboy vocal lines adding a strange religious dimension to an already incredibly intense performance.  In the darkness on stage, Lowe clawed the air and contorted his body in a manner which suggested he was perhaps undergoing some sort of exorcism in front of our very eyes. He finally found some sort of peace, the set ending on a calm note. I felt dizzy, and realised this was because I’d been holding my breath.

As an exhibition of music making at its most primal, seeing some improvisation by the great American drummer Chris Corsano would take some beating. Here he played with Heather Leigh, who made us all look ridiculously underdressed, in their Jailbreak formation. They ripped straight into it, Leigh attacking the top end of her pedal steel, while Corsano was no more than just a blur of limbs and sticks. The drummer absorbed everything leigh threw his way, undercutting her banshee wail with mallet rumble, and topping her harmonica wail with his own version: circular breathing, simultaneously pounding at his kit. 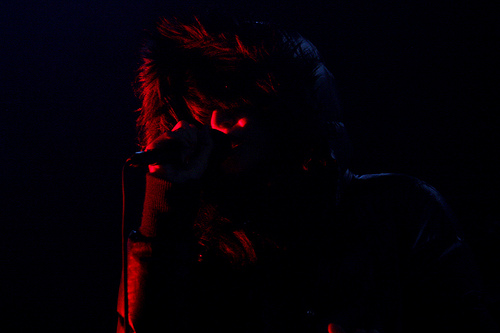 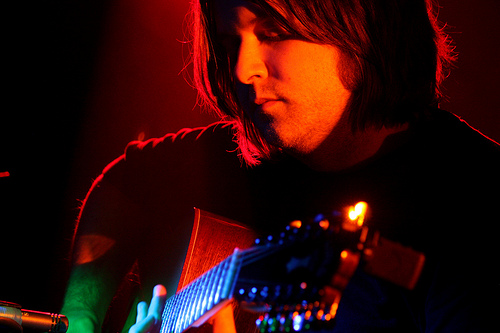 If jailbreak were the antithesis of repetition, Gnod were the epitome. Their set seemed to be just one simple riff, precise and methodical, repeated until it had gone way past being boring, until every slight inflection took on the heaviest of significance. Likewise Cave, who were elevated above the level of riff-chewing psych-kraut jam band by virtue of having possibly the weekend’s second best drummer in their lineup: the razor sharp Rex McMurry didn’t miss a single beat by a whisker all night. At times they sounded like Jim Morrison had unexpectedly walked off stage during a Doors gig, and the remaining band had opted to fill time by playing exactly the same three seconds of music over and over until he returned.

The krautrock revivalists were soon to be laid to waste by the triumphant return to Supersonic of Michael Rother (with his fourth appearance at the festival, he is running the risk of becoming the unlikeliest of Birmingham institutions himself), this time in his new Hallogallo outfit. Earlier in the day I’d seen Rother taking part in a Q&A in which he lamented the failure of Neu to work as a live concern – technology at the time not being as well developed as he needed, it seems. Here he has assembled a band which finally enables him to finally live out that fantasy: Aaron Mullan from Tall Firs on bass, and Sonic Youth’s Steve Shelley as a Stars In Your Eyes version of Klaus Dinger. In contrast to previous occasions in London when I’ve seen Rother play with Harmonia, this was loud and euphoric; during a version of “Deluxe (Immer Weider)” a motorik moshpit formed, a gleeful crowd losing themselves in the endless beat.

Metal, extreme repetition, dark noise and religious overtones: all of this came together  in a crushing festival-closing set by Michael Gira’s reborn Swans, who took to the stage accompanied by minimalist drone and the ringing of church bells. The tension was finally broken by an earth-splitting guitar eruption, Gira with back arched and howling at the stars, the huge shards of sound gradually assembling into the weighty riff and mantra of ‘No Words/No Thoughts’ from their behemoth of a new album, My Father Will Guide Me Up a Rope to the Sky. Gira was on menacing form, screaming about God, Jesus Christ and “my father” while glaring at the band as they fashioned huge chunks of noise in the darkened corners of the stage. I spoke to someone who told me they’d seen Swans “over twenty” times, and that they’d never been better. How could they have been? This was heavy, as heavy as any metal known to science, or even to the mighty Supersonic Festival for that matter.