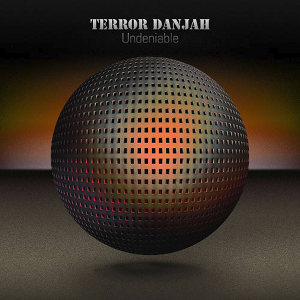 It’s testament to how quickly grime moved in its heyday – and to Terror Danjah’s top-boy status within it – that his hiatus from releasing records was so keenly felt. His absence left a huge void in grime, and while he was AWOL for only two years – between 2006 and 2008 – it seemed much longer. With such an almighty back catalogue to draw on, Terror Danjah’s album-length releases since returning to the frontline (such as the Hardrive compilation) have so far tended towards retrospectives, a tidying up of loose ends. Unusually for a grime producer, Terror’s always been meticulous at compiling his own music; a mark, perhaps, of how seriously he takes his craft.

Undeniable has Terror still with one foot in his past, but also boldly striking out in the future. The older tracks on here – ‘Bruzin’ (now in VIP form) and ‘Sonar’ – are absolute classics of instrumental grime. No one makes grime like Terror Danjah; that smashed-glass percussion, that eerie echoing space, that sense of the tracks shuddering and collapsing under their own heaviness. But, most of all, his uniqueness lies in the swing and funk that he manages to get into even his most brutal tunes, as on the smoke-trails of extra-terrestrial synths that wrap around the feints and jabs of ‘Bruzin’s beats. In echo of Wiley’s devil mixes,  ‘Sonar’ appears here with its percussion largely stripped out, with that rusted-up bleep laying waste to everything before it; surely one of the most addictively evil sounds in dance music outside of prime-period Joey Beltram.

If anything, the new tracks on Undeniable take the intricacy and intensity of Terror’s productions to another level. ‘Breaking Bad’ is stunning, and sounds like nothing else before it. For two minutes Robert Hood-esque tracky techno is blurred into jittery UK Funky; a sick, queasy, brilliant reinterpretation of a peak-time club banger, lit with stabs of neon rave. Then, however, the tune spirals off to a different plane altogether, into a jaw-dropping electro-funk wigout that Dam Funk would be proud of. This is a genius at work, a point underlined further by ‘SOS’, an 8 minute epic based around a constant two-note refrain. Terror never lets your attention wander, as he moves seamlessly from skeletal grime, to shuffling house, through to a clattering riot of Funky, all overlaid with that car-alarm whistle. There’s an enthralling daring and confidence here, as if Terror’s intentionally setting out to prove how much he can do with so little, turning lead into gold.

There’s so much care and thought gone into these beats, and in a way it’s great that they’re left as instrumentals, without MCs covering up their finer points of detail. However, some of the most exciting moments in grime’s history have come when MCs go full-pelt over Terror’s productions, those reverb-heavy beats splashing over the edges of the MC’s bars – just think of ‘Cock Back’ or ‘Boogeyman’. Terror brings a small cast of good-to-great MCs to Undeniable, without letting them loose on his finest beats. It’d be nice to hear the likes of ‘SOS’ and ‘Acid’ vocalled, albeit with instrumental versions included too, but sadly that’s not to be. However, D Double is still a great, slinky counterpart to snaking rhythms of the album’s title track, and Mz Bratt is typically fiery on ‘This Year’. The only real disappointment of the album, though, comes from one of the MCs most associated with Terror Danjah; Bruza’s contribution to ‘Leave me Alone’ is sombre, sour monotone. Fine as it goes, but given his talent for clownish none-more-cockney theatricality, it’s not really what you listen to Bruza for.

For all his talent at backing the rough and tumble of MC’s battles, though, it shouldn’t be forgotten that Terror was also a pioneer of the cruelly short-lived “R ‘n’ G” micro-scene. And, true to form, many of Undeniable’s softer moments are wonderful, especially the gorgeous ‘I’m Feeling U’, which floats between feather-light deep-house and 2-step as a vocoder lick shimmers in and out. The album ends on its poppiest note, but also one of its strangest. ‘Story Ending’ has an old school rave vocal, full of yearning emotion and totally winning bedroom-diva charm, but Terror’s bassline trips and stumbles, eventually collapsing into a low, broken moan. To me, the track sums up everything great about Terror Danjah’s music; the melding of light and dark,  the deep knowledge of and appreciation for the history of London’s dancefloors, the most of all, the utterly uncompromising approach to creating something new and unexpected out of that history. Thank God he’s back.