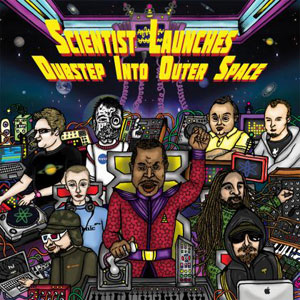 With dubstep’s continuing rise in popularity and forays into the mainstream, long players that can stand out on their own musically and make an impact over time are becoming all the more necessary to the genre’s growth as well as to remind listeners of its potential for diversity and ingenuity.

Step in Tectonic Recordings, the Bristol-based label headed by Pinch, one of the longest standing and most active proponents’ of dubstep’s myriad styles and facets. With both his label and work within the Bristol scene, Pinch has continuously provided listeners and fans with quality music and productions that have evolved with the genre over the years – from meditative eyes-down skankers like ‘Qawwali’ to pop-friendly vocal numbers like ‘One Blood’ and more recently ‘Croydon House’, with its uptempo, dancefloor vibe. So to see him release Scientist Launches Dubstep Into Outer Space is all the more logical, a fitting crowning of an already busy and fruitful career within the dubstep continuum.

Scientist Launches Dubstep, in one way, is the dubstep release of the year, not just musically speaking but also in terms of its subject’s historical impact on the still young London genre. Over the last year Pinch masterminded a concept that saw legendary dub engineer Scientist, he of Scientist Rids the World of the Curse of the Evil Vampires fame, being given 12 exclusive dubs from a who’s who of dubstep’s most interesting and pioneering producers to date. The result is a compilation that brings the old and the new together in a splendid way, in the process providing the first solid link between the music’s fascination with Jamaican dub and the island’s rich engineering tradition which has infiltrated every corner of the music world.

The list of contributors to this project is is a dub and dubstep fan’s wet dream come true, with Kode 9, Mala, Loefah, Shackleton, Pinch, RSD, The Bug, Roly Vex’d (under his Armour guise) and more providing dubs for Scientist to magic. Take some time to read or look up interviews with any of these guys and you’ll see that dub has played an important part in all of their musical formations, and so to see them all in one place with Scientist is really quite special.

The first disc here is made up of the dubstep originals, which by itself already makes for an outstanding release. You’ve got Mala’s ‘City Cycle’, easily one of the most inspiring lost dubs from the London producer, a lost track from Loefah and Pokes, a new track from Kode 9 and Spaceape called ‘Abeng’ – which hopefully hints at what their new album may deliver – as well as a new track from Pinch featuring haunting vocals by Emika titled ‘2012’. Armour delivers a surprisingly dark and captivating number while Distance, Shackleton, RSD and Cyrus all step up with contributions ranging from broody metal riddims to hypnotic, percussion driven numbers. A special mention goes to Jack Sparrow, probably the least well known of the producers here, who delivers one of the comp’s best tracks with a seriously irresistible dancefloor groove that makes great use of what sound like African tribal chants.

The second disc sees Scientist take each original and apply his dark, dub voodoo to them, turning the often cold, modern dubs into breathing, living music. Snares echo in what seem like never-ending caverns, hi-hats fly around your ears, drifting from left to right, and samples and vocals are given a grittier edge. Having had the chance to listen to this album on repeat for nearly three months now, one thing that really struck me is just how much bigger, and in a way you could argue better, the Scientist dubs sound. It’s an historical and fascinating release that by its very nature highlights just how far dubstep can sometimes be from its dub inspirations. I don’t mean that in a bad way – the music has never pretended to be a replacement for Jamaican dub, but putting the two together like this next to each other makes for fascinating sonic observations. As an aside Scientist has publicly said that he likes dubstep and thinks that what these producers are doing is a great continuation of the work that he and others like King Tubby or Lee Perry started.

Hardcore dub heads may find that the Scientist dubs are not as “far out” as some of his more timeless productions. And while this is somewhat true, and arguably also applies to the Scientist vs The Upsetters live show recently that toured the UK in support of the release, it doesn’t distract from this compilation’s quality and its relevance at a time when dubstep is enjoying its pop twilight. If it helps to show a generation of young listeners where some of the roots of the music lie, then that can only be a good thing, and from a fan’s perspective, I never thought ‘City Cycle’ would ever come out, so to have it released with a Scientist dub is basically all I wanted for Christmas. Santa Pinch – my hat is doffed off to you.